/ Roads / $6.5M Apache Trail Road-Improvement Project Should be Done by End of Summer

$6.5M Apache Trail Road-Improvement Project Should be Done by End of Summer 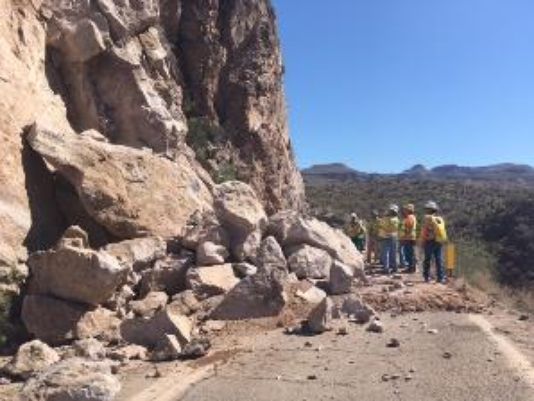 A road improvement project along 17 miles of State Route 88 east of Phoenix is expected to be completed by the end of summer, state officials say.

The Arizona Department of Transportation said on its website that the $6.5 million project focuses on roads starting “3 miles east of Apache Junction and ending 7 miles east of Tortilla Flat (milepost 203 to 220),” within the Tonto National Forest.

SR 88, also known as Apache Trail, is a scenic, winding road that leads to Canyon Lake and other recreational areas east of Phoenix. The improvement project was launched in November.

“Crews have been resurfacing the road, paving pullouts, installing new signage, replacing guardrails and adjusting some of the road’s curves,” ADOT said on its website.

Certain portions of the road have been restricted or closed for extended periods during the project, causing drivers occasional frustration.

But a video clip posted on ADOT’s website Wednesday, showing a Hollywood-esque explosion that sent large chunks of rocks tumbling onto the highway, seems to justify the road restrictions.

Crews are removing the “overhanging rock” from cliffs nearby with explosives to limit “the possibility of rock falling onto the highway,” the agency said.