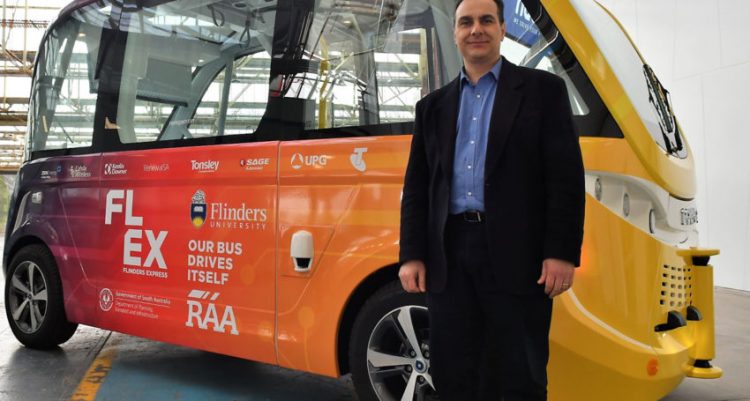 Parul Dubey on June 19, 2018 - in Technology, Transportation
The five-year Flinders University trial is the first time autonomous buses have operated on public roads in South Australia.

The Flinders Express (FLEX) will initially provide ‘first mile–last mile’ shuttle services between the nearby Clovelly Park Train Station and Tonsley’s Main Assembly Building, then connections to bus stops on the major South Road artery and businesses within the Tonsley precinct.

A former Mitsubishi car manufacturing site in Adelaide’s southern suburbs, the Tonsley Innovation District has been transformed into Australia’s first innovation precinct and has quickly become a hub for advanced manufacturing and other future facing industries.

The French-designed Navya Arma electric shuttle can carry up to 15 passengers at speeds of up to 40km/h, but will be limited to 30 km/h during the trial. FLEX will be managed by an on- board chaperone informing users of the technology and ensuring safety.

Funded by the State Government and industry partners, within a year the shuttle will run to the nearby Flinders Medical Centre and the university’s Bedford Park campus before using main arterial roads around the entire Bedford Park precinct.

Workers, students or visitors travelling to Tonsley by traditional bus or train can can book a ride online at the Flinders University website.

Flinders University Head of Civil Engineering Professor Rocco Zito said demonstrations and trials of driverless vehicles that involved the community were a good way of building acceptance of the new technology.

“Our aim is not to prove the technology but rather expose the public to this new type of transport service and learn from their responses and reactions to help driverless vehicles gain general acceptance,” Professor Zito said.

“In order for driverless vehicles to become an integral part of our transport system we need to trial these vehicles in real operating conditions and encourage public participation and feedback.

“It’s not a question of if this technology will be on roads, but when.” The vehicle will be docked within a six bay solar recharge garage soon to be built near the Mitsubishi Administration building. The free solar garage will also be available to the public wanting to recharge their own electric vehicles.

South Australia has a history of involvement with autonomous car research and in 2015 held the first driverless car trials in the Southern Hemisphere.

It hosts a number of leading autonomous car companies including Cohda Wireless and its innovative V2X (Vehicle to everything) technology and RDM Group, which opened its Asia-Pacific headquarters in Adelaide last year.

Transport operator Keolis Downer is involved with the Flinders University project, having collaborated on the Navya autonomous shuttle projects in Melbourne and other cities around the world including Paris, Las Vegas, and Montreal.

“By exploring how these vehicles can complement existing transport solutions, we aim to encourage the use of public transport and create more liveable and sustainable environments for communities,” he said.

Comments are disabled
NEXT ARTICLE
Five Bridges to Be Replaced Along I-85 in Jackson and Franklin Counties
June 19, 2018
PREVIOUS ARTICLE
Brown and Caldwell Selected for Environmental Post-Closure Maintenance of Guam’s Ordot Closure Facility
June 19, 2018