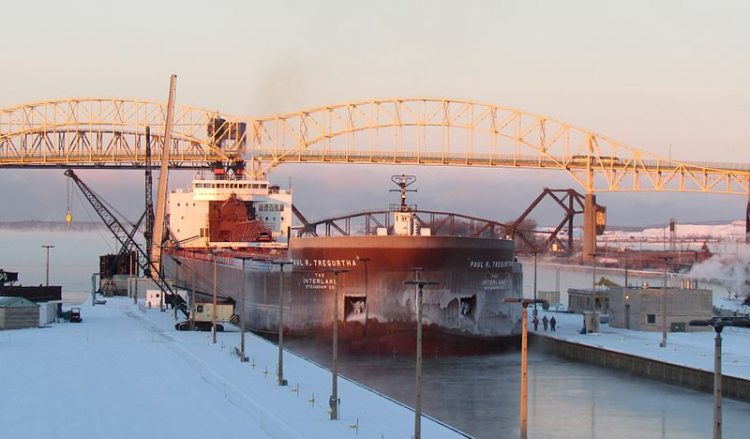 “The U.S. House overwhelmingly approved the Water Resources Development Act (WRDA) of 2018 by a 408 to 2 vote,” Kran said. “At the same time – Michigan’s Congressional delegation was successful, in a bi-partisan effort, to convince the U.S. Army Corps of Engineers (USACE) to use additional appropriated funds towards Soo Locks modernization.”

As a result, Kran said USACE’s updated fiscal year (FY) 2018 work plan now directs more than $57 million to be spent on major rehabilitation and modernization at the Soo Locks complex, and is viewed as a possible first step in the eventual construction of another “Poe-sized” lock as a backup to the biggest lock in the Soo Lock complex.

Although Congress authorized construction of a new lock in 1986, the estimated $1 billion in funding never materialized.

As a way of, “putting our money where our mouth is,” Snyder said Michigan has committed an additional $50 million in state funding, with plans to secure additional commitments from other Great Lakes states to complement federal funds in financing new lock construction, estimated to take 10 years for completion.

“That is very significant,” Kran said, explaining that currently only the Poe Lock, out of the four existing locks, is capable of accommodating ships larger than 730 feet.

“Many of today’s cargo ships needing to make the 21-foot transition from Lake Superior to Lake Huron are in excess of a 1,000 feet. So if something were to go wrong with that one lock, the economic impact would be significant and immediate.”

“Since taking office I’ve worked with USACE leadership and the Trump Administration to highlight the dangers to our economy and national security of an unscheduled outage of the 50-year old Poe Lock,” said Bergman. “This is another major step toward ensuring seamless operation of the Soo Locks.”

The additional fund allocations released in the USACE FY18 work plan, according to Rep. Bergman, include:

According to Kran, in addition to the Soo Locks, WRDA authorizes improvements to the nation’s ports, inland waterways, locks, dams, flood protection, ecosystem restoration and other water resources infrastructure.

Michigan Farm Bureau President Carl Bednarski, a Tuscola County cash-crop farmer, said WRDA passage in the Senate will be a vital next step to maintaining an efficient and reliable inland waterway system linked to competitive ports that allows Michigan agriculture to provide affordable agricultural products domestically and to compete internationally.

“As a Great Lakes state, and with more than 60 percent of America’s grain exports and many other important commodities such as fuel, coal and agricultural inputs moving through the country’s inland waterway system, Farm Bureau policy explicitly supports the maintenance and improvement of our transportation infrastructure, including the locks and dams system and other waterway infrastructure,” Bednarski said.

According to Kran, the Soo Locks are a critical waterway, not only for agriculture, but for a majority of iron ore for the U.S. The Poe lock, the only lock capable of handling 1000-foot vessels, accounts for about 70 percent of shipments.

A Department of Homeland Security’s Office of Cyber and Infrastructure analysis concluded it was “hard to conceive” of a single piece of infrastructure more consequential than the Poe lock in terms of impact to the economy from an unexpected and sustained breakdown.

According to Kran, that report projected that a six-month closure of the Poe lock would bring steel production and manufacturing industries to an effective halt, with the ripple effects down the iron ore supply chain crippling the United States economy and costing 11 million jobs. The report concludes that the national unemployment rate would hit 11.3 percent, exceeding the 10 percent rate in October 2009 during the recession.