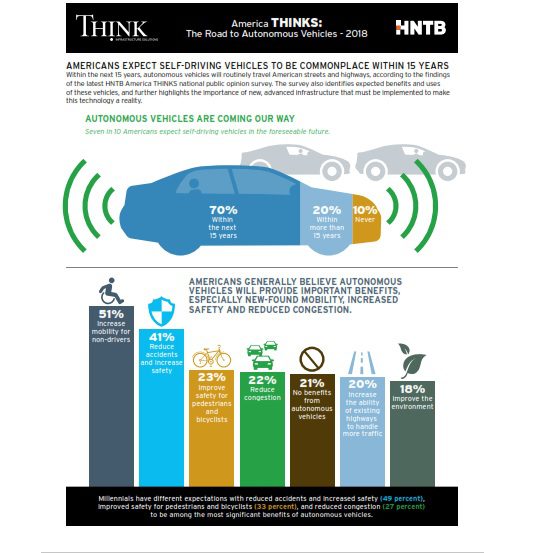 NEW YORK (June 4, 2018) – Americans expect autonomous, self-driving vehicles will be commonplace in America within the next 15 years, according to research published in a new HNTB Corporation America THINKS national public opinion survey, which also highlights the need for infrastructure solutions to accommodate their use.

The survey, The Road to Autonomous Vehicles – 2018, found seven in 10 Americans (70 percent) believe autonomous vehicles will routinely navigate the nation’s streets and highways within 15 years. The survey also identified Americans’ perspectives on the benefits and uses for this technology as these vehicles become more prevalent, and found views vary depending on the respondents’ age.

“Providing improved mobility to population segments, such as the blind and disabled, will be transformative for them. Think about the economic benefits that could be gained by offering opportunities to currently underserved segments. This will happen quite soon,” said Jim Barbaresso, HNTB’s intelligent transportation systems national practice leader and senior vice president. “In fact, we are already beginning to see these technologies advancing into real-world testing with their implementation in a number of smart city programs around the nation. It is both a challenge and significant opportunity as transportation agencies weigh current infrastructure needs with the onset of autonomous and connected technology.”

“Making autonomous vehicles a reality will require new solutions from the transportation community—from planners and designers to policy makers and the agencies who implement. All of us involved in the development and execution of this technology must recognize the need to educate and communicate information to help people understand the benefits of automated vehicles and how this technology will be used,” said Barbaresso.

Expected uses of AVs
When asked for views about the use of autonomous vehicles when readily available, 37 percent of respondents cited travel between transit stations and airport terminals as the most common usage, but among seniors*, 52 percent agree. Ride-hailing and ride-sharing services were seen as the next most common use by 34 percent of respondents. Mobility within defined areas such as business parks and residential areas was next at 33 percent overall, with 46 percent of seniors who agree. Local package delivery was cited by 32 percent of all respondents compared to 46 percent of seniors.

Safety concerns remain
According to the survey, almost six in 10 (59 percent) Americans believe autonomous vehicles are not as safe as vehicles operated by people, and 55 percent would not be willing to even ride in an autonomous vehicle today. The survey also found the presence of a person who could, if necessary, assume control of the vehicle, would likely convince 60 percent of Americans to ride in a self-driving vehicle.

However, safety concerns for autonomous vehicles vary based on age. For example, a majority of millennial respondents (54 percent) believe self-driving vehicles are safer; 60 percent of this same group would be willing to ride in an autonomous vehicle today; and the presence of a person who could, if necessary, assume control of the vehicle, would convince 67 percent of Gen X* respondents to use these vehicles.

“As self-driving technology continues to advance, these vehicles will ultimately prove to be safer, especially when compared to the nearly 40,000 traffic fatalities that occur each year from people-driven vehicles,” said Barbaresso. “Technology refinements onboard the vehicles as well as in the infrastructure along our roadways will eventually enable us to drive traffic fatalities to near zero.”

“Automated vehicles will transform mobility as we know it today,” said Barbaresso. “People recognize the flexibility of self-driving vehicles, and are just beginning to understand see the value and benefits these vehicles can provide based on their particular needs to positively impact their daily lives.”

About the survey
HNTB’s America THINKS survey, The Road to Autonomous Vehicles – 2018, polled a random nationwide sample of 1,010 Americans, ages 18+, between April 27 and April 30, 2018. It was conducted by Russell Research using an email-invitation and online survey. Quotas were set to ensure reliable representation of the entire U.S. population ages 18 and over. The margin of error is +/- 3.1 percent.