A Tunnel That Improves Automated Vehicles 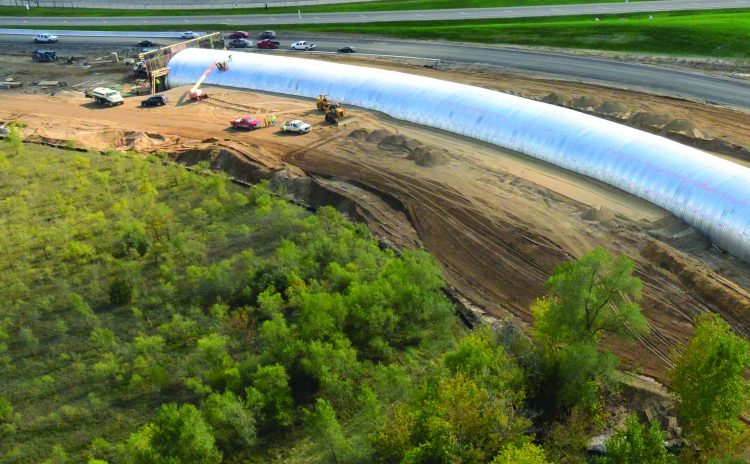 Angus Stocking on July 2, 2018 - in Articles, Feature, Featured
Willow Run, a manufacturing complex located near Ypsilanti, Mich., was built by the Ford Motor Company in 1940 as one of the first facilities dedicated to the mass production of military aircraft, primarily the famous B-24 Liberator heavy bomber, the most produced American military aircraft of all time—at its peak, Willow Run produced 650 B-24s per month. The airport built to support this production is considered by some historians to be the first modern airport.

ACM’s Willow Run facility is specifically designed to “enable safe validation of connected and automated vehicle technology, and accelerate the development of voluntary standards.” To do this important work, the site needs realistic road infrastructure that challenges automated systems. Many useful roadway features were already in place at Willow Run, including double overpasses, a railroad crossing and a highway loop for testing cars at sustained speeds.

But the site did not include a tunnel, certainly not a long tunnel that would challenge a driverless car to find the exit point after tunnel entry. ACM designers asked for a tunnel that was long and curved, so the exit wasn’t immediately visible upon entry. In addition, it needed to be wide enough so two-way traffic flow could be analyzed in this environment. Also, because cost and delivery always are factors, ACM was looking for cost-effective solutions that could be built efficiently without a deep foundation system that could be cost prohibitive.

The BridgeCor solution provided many cost advantages as compared to other tunnel designs. The lightweight system allowed for a shallower spread foundation, eliminating the need for a deep foundation pile support design. This solution was able to be backfilled with a MDOT Class II natural sand gradation that was readily available from a local source. The plate solution reduced the number of trucks required for delivery, as the palletized loads allowed for approximately 40 feet of tunnel per truck. Finally, this solution allowed for the contractor to assemble the structure with smaller crews and without significant equipment costs. 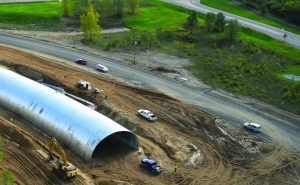 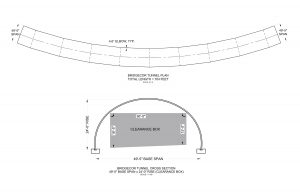 The final tunnel design was 704 feet long with nine 4.6-degree elbows spaced every 79.5 feet to create a long radial curve. The resulting structure design was based on a 49.5-foot span with a 24-foot rise to allow for the required clearance box.

To design the structure, Contech inputted soil and footing information into CANDE, a special-purpose finite-element analysis (FEA) program developed for the structural design and investigation of buried structures.

“We considered site soils and the proposed backfill materials in the FEA model to determine the final gage of the structure material,” says Contech Senior Project Engineer Matthew Westrich. “The program models the structure and the soil as a combined system. Soil loads are applied incrementally to model how the backfill is placed and, along with the live loads, the program confirms the design criteria of the structural materials.”

BridgeCor is a deep corrugated structural plate, an iteration of the firm’s MULTI-PLATE that has been a buried bridge standard for more than 80 years. Compared to MULTI-PLATE, BridgeCor offers nine times the stiffness and three times the strength, allowing for wider spans—up to 80 feet—and efficient construction methods. BridgeCor benefits include the following:

• System allows for efficient fabrication and delivery from a dedicated facility.

• Site-specific designs meet project needs, such as the multiple curves and shallow foundations needed at the ACM test track. 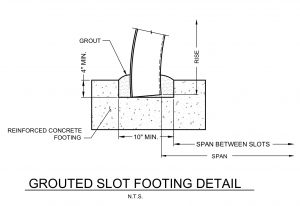 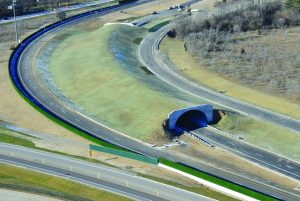 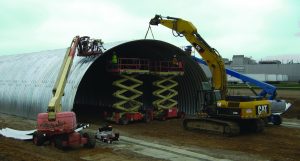 The Willow Run tunnel consisted of 163 arched rings made with seven plates per ring for a total of 1,141 individual corrugated plates. All plates were manufactured to this design at Contech’s plant in Winchester, Ky., just five hours from Ypsilanti.

“One critical aspect of this type of construction is completing consistent dimension checks for span, rise and length as the structure is being assembled,” notes Contech Senior Bridge Consultant Ryan Loeprich. “If the plate falls outside standard tolerances, the assembly fit becomes increasingly more difficult. Z Contractors’ assembly crews far exceeded expectations by their speed of production, but, more importantly, kept the tunnel design shape tolerances throughout the tunnel construction.

“Another critical aspect of this type of construction is maintaining the assembled structure shape during the backfill process,” adds Loeprich. “Z Contractors crews were dedicated to the assembly of the structure, and Iafrate completed the backfill. Iafrate took proper care to use the correct backfill methods to ensure the tunnel kept its designed and assembled shape. This also included consistent dimension checks for span and rise throughout the entire process.”

“Both are experienced Michigan DOT contractors with a focus on bridge and roadway construction, but this particular product and construction process was new,” says Loeprich. “We couldn’t be more satisfied with their methods and diligence to tackle a project of this magnitude.”

To streamline the assembly, the BridgeCor plates were delivered as needed in manageable, color-coded bundles—the aim was to keep materials available 20 feet ahead of Z Contractors’ assembly crews and not have too many plates onsite at any one time to facilitate the staged construction process.

With pre-construction guidance from Contech (see “How to Assemble a 700-Foot Tunnel in Less Than a Month”) and periodic onsite presence of the Contech support team, assembly crews were able to work rapidly, averaging about 30 feet of completed tunnel a day—the entire tunnel was assembled in less than a month. To speed the assembly process, the crew was divided into two teams that assembled color-coded haunch plates into the foundation and then placed pre-assembled crown plates to close the structure. This process helped minimize the time crews needed to work 24 feet in the air on boom trucks.

In a way, this unusual, exemplary and cost-effective tunnel infrastructure was “infrastructure supporting infrastructure” or meta-infrastructure, if you will. As the experimental vehicles using new autonomous and connected technologies traverse the tunnel, the data collected will influence the life-saving design of future vehicles and roadway infrastructure.

• General Safety: In addition to standard safety procedures required by OSHA such as the use of Personal Protection Equipment (PPE)—hardhats, steel-toed boots and gloves—contractors are given additional instructions such as “avoid walking underneath plates while hung from cranes or other equipment” and “avoid handling plates without gloves.”

• Structure Information: The test-track-specific documents include a plate layout drawing that details exact plate placement down to specific bolt staggering patterns as well as placement and use of the “movement control hooks” for future shape monitoring. The specific weight, size and color marking of the plates as well as required fasteners and miscellaneous items are detailed on the bill materials along with handling instructions.

• Foundations: Prior to assembly, contractors need to verify line, grade and elevation per plans as well as confirm the required keyway width and depth dimensions and minimum compressive strength of the concrete prior to the construction of the foundation and assembly of any plates onsite. Keyways are shallow channels that provide a guide for the haunch plates of the BridgeCor structure and aid in controlling the span and shape of the structure.

• Assembly: Assembly begins by bolting the BridgeCor plates together on their sides to complete at least one full ring. After completion, the span and rise required are confirmed prior to lifting the full ring into place. The first two rings of the structure are lifted into place as a whole unit—subsequent full rings are assembled plate-by-plate, utilizing smaller lifting equipment. Bolt torque requirements are provided by ASTM standards: 100-300 foot-lbs. The structure keyway then is grouted after structure assembly is complete.

• Backfill and Shape Monitoring: Proper backfilling procedures are crucial for the structure’s long-term performance. The structure and backfill work as a system and require a maximum of 8-inch loose lifts placed longitudinally on each side of the assembled tunnel with a maximum difference on each side never to exceed two feet.

As a guide for buried bridge corrugated structures, the National Corrugated Steel Pipe Association developed a comprehensive manual outlining the recommended procedures as well as common backfilling concerns during the process. Throughout the backfilling process, shape monitoring is performed to ensure the assembled structure maintains its designed shape.