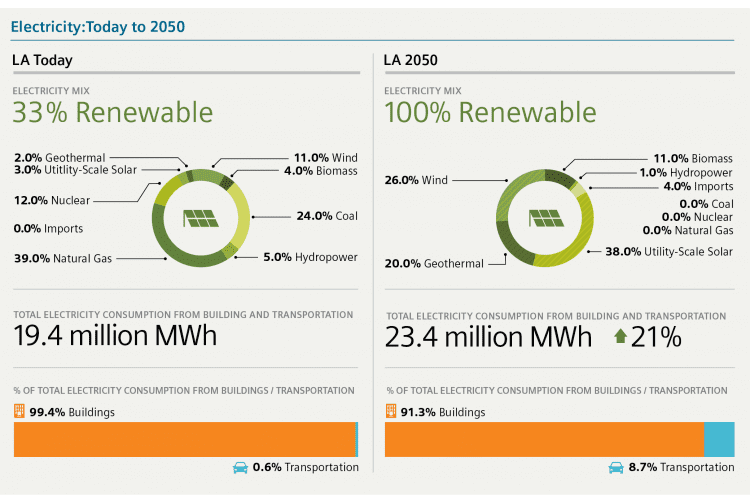 Siemens, in conjunction with the Los Angeles (LA) Mayor’s Office of Sustainability, published its LA City Performance Tool Report, identifying potential measures to achieve the City’s 2015 Sustainable City pLAn goals. Los Angeles is a leader in U.S. city sustainability goals. Mayor Eric Garcetti is the co-founder and chair of Climate Mayors, a group of more than 400 mayors representing 69 million residents. The pLAn sets targets for LA to reduce GHGs 60% by 2035 (60×35) and by 80% by 2050 (80×50) relative to 1990 across all GHG emissions sectors. The pLAn is a roadmap to ensure a more equitable, prosperous and cleaner city for all residents.

“Siemens analyzed Los Angeles infrastructure data through its City Performance Tool, a data-driven tool that allows cities to make informed infrastructure decisions, through the lens of the sustainability goals. The analysis found that Los Angeles would need to transition to 100% generation of renewable electricity and 45 percent passenger travel by transit and active transport to achieve its goals,” stated Martin Powell, Head of Urban Development for Siemens. “In addition to the current policies in place this is achievable through the implementation of 11 transportation and four building technologies. The implementation will result in nearly 70% emissions reductions by 2035, more than 85% reductions by 2050 and 1.8 million jobs.”

The 11 transportation technologies include a number of electric mobility options including electric cars, electric buses and electric highways. The uptake of these technologies would drive up transportation electricity consumption by 1500% by 2050. Therefore, the report finds that a modernize grid must be the highest priority. In addition, software must be implemented to understand when, where and why electricity is being used and providing predictive analytics for grid maintenance.  With the implementation of this infrastructure, the city would achieve its sustainability goals, increase resiliency, and improve the quality of life of LA residents. It would also create more than 1.8 million jobs by 2050.

Siemens is committed to using technology as a tool to advance the common good through its Business to Society platform. With more than 4,000 employees in the state of California, including its Sacramento, CA Mobility manufacturing facility, the organization supports the state’s sustainability goals through its building technology, energy management, mobility, healthcare and PLM software solutions which stretch Northern to Southern California.

About the Siemens City Performance Tool

This press release, photos and additional material are available at http://news.usa.siemens.biz.

Siemens Corporation Siemens Corporation is a U.S. subsidiary of Siemens AG, a global powerhouse focusing on the areas of electrification, automation and digitalization. One of the world’s largest producers of energy-efficient, resource-saving technologies, Siemens is a leading supplier of systems for power generation and transmission as well as medical diagnosis. With approximately 372,000 employees in 190 countries, Siemens reported worldwide revenue of $92.0 billion in fiscal 2017. Siemens in the USA reported revenue of $23.3 billion, including $5.0 billion in exports, and employs approximately 50,000 people throughout all 50 states and Puerto Rico.