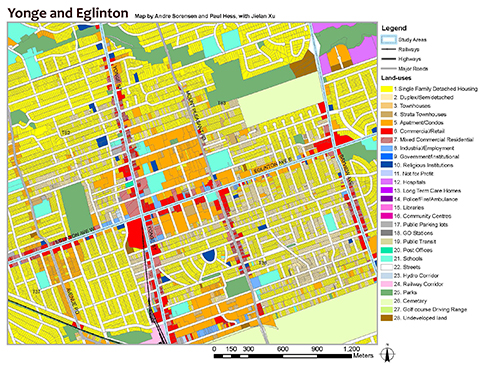 Toronto’s land-use maps are important planning tools but they lack detail and are often out-of-date. Municipal planning diagrams don’t provide much detail, and the province doesn’t make its land-use data available to researchers. Zoning and approved uses for a particular site don’t necessarily correspond to what ended up being built there.

To fill the void of accurate data, geographers André Sorensen and Paul Hess recruited about three dozen students to meticulously code the actual land uses on each piece of property across Greater Toronto. Their research tool: Google Street View, which allows users to zoom in and “see” what’s happening at ground level in every nook and cranny of the city. “It’s very laborious,” admits Sorensen, noting that in three years the team has coded five million parcels of land; the analysis will continue for another two years. The aim is to create a baseline, and then update it every five years in tandem with the census.

Once complete, the project will yield a far more detailed map of land use in the GTA than has ever been publicly available. What’s more, by cataloguing what’s actually taken root in post-war subdivisions and combining this information with census data and zoning rules, Sorensen and Hess believe they will develop a much keener understanding of what kinds of planning policies yielded the sorts of compact, mixed-used communities that are still rare in suburban municipalities. “We’re still building the dream city of the 1950s,” muses Sorensen. “There are places where this pattern was changed, and we’re looking at why.”