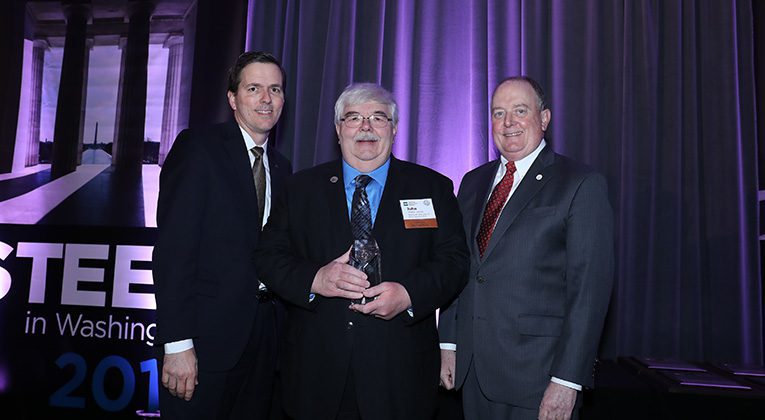 Upon receiving the award, Cross credited his accomplishments as a team effort.

“It is an award that recognizes the impact and effectiveness that all of AISC has had in the promotion of structural steel in the U.S.” he said. “I just happen to be the person who had the privilege of being on the point of the marketing effort over the past years.”

When Cross joined AISC, he was responsible for the Design Build initiative. His goal was to encourage early fabricator involvement and sell their expertise, not just their steel.

“The structural steel industry pioneered what is BIM today and the greatest value can be gained on a BIM project when the project is framed in structural steel,” Cross expressed.

An expert in construction economics, Cross follows industry trends and provides a quarterly perspective for AISC full and associate members to help guide their business decisions. In 2004-2005 during the the “don’t use steel” scare, when scrap prices and structural steel prices rapidly escalated, Cross kept the marketplace from going into a frenzy by providing credible information to owners and designers and educating fabricators on avoiding sending panicked messages to clients. In 2008 when the market initially downturned, he contacted members to inform them that a deep recession was starting and what was happening was not going to be a short term blip.

Cross disclosed that he originally focused on sustainability in his career because of anger and fear. When the American Society of Heating, Refrigerating and Air-Conditioning Engineers (ASHRAE) draft for ASHRAE 189.1 Standard for High Performance Green Buildings came out for public review, the concrete industry attempted to greenwash their product and change how recycle content is calculated. Cross felt that concrete being listed as a highly recyclable material would have had a negative impact on the environment and competing materials like structural steel. He began attending ASHRAE committee meetings, only to have his comments shunned. Then he collected hundreds of signature which forced ASHRAE to restructure the committee. Cross was then appointed to the committee and influenced the language change. After his experience, he realized that with each individual and as an organization lies the responsibility to make prudent decisions to preserve resources so they are available for future generations.

Cross was one of four outstanding individuals to be awarded. Other winners include: