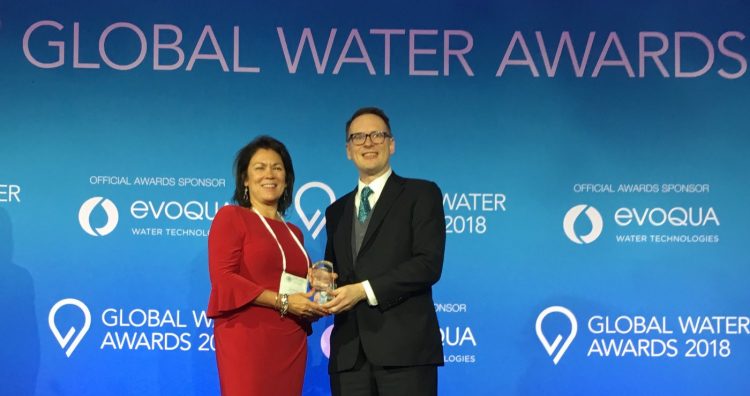 PUB’s continuous R&D and innovation efforts to improve the efficiency of its water treatment process and operations has earned itself a feather in its cap. Its wastewater treatment demonstration plant at Ulu Pandan, set up specially to test advanced used water treatment processes before full deployment in future, has captured global attention and won the Water/Wastewater Project of the Year Award at the 2018 Global Water Awards in Paris, France. This International Award recognises the most important achievements in the global water industry and acknowledges innovative technological advancements.

The Ulu Pandan wastewater treatment demonstration plant, which started operating in 2017, was jointly developed by PUB and the Black & Veatch + AECOM Joint Venture. The demonstration plant enables PUB to test and validate advanced wastewater treatment technologies, allowing it to mitigate any operating risks before incorporating the technologies at a larger scale, at the future Tuas WRP. The Tuas WRP is constructed as part of the Phase 2 Deep Tunnel Sewage System (DTSS) that will meet Singapore’s used water collection, treatment and disposal needs. When completed in 2025, Tuas WRP will be the largest membrane bioreactor (MBR) facility in the world, with a 30% more compact footprint compared to conventional plants.

These tested technologies will enable the future Tuas WRP to be more energy efficient – doubling the energy recovery while consuming lesser energy compared to conventional plants.

“R&D is the key driver to Singapore achieving a robust management system across the entire water loop and PUB continues to innovate to increase the efficiency of water and wastewater treatment. The Ulu Pandan wastewater treatment demonstration plant has allowed us to validate and set new standards for wastewater treatment while fulfilling our need to bring down energy use, keep things compact in land-scarce Singapore and reduce reliance on manpower. The success of this demonstration plant will ensure that the future Tuas WRP and its integrated NEWater factory can contribute sustainably towards the goal of increasing Singapore’s overall water recycling rate,” said Harry Seah, Assistant Chief Executive (Future Systems and technology), PUB.

“Singapore continues to be at the leading edge of innovation in the water industry. This award recognises the results of harnessing advances in digital water technology together with the latest advanced water treatment processes to realize operational, economic and environmental sustainability goals at the Ulu Pandan wastewater demonstration plant,” said Cindy Wallis-Lage, President of Black & Veatch’s Water Business.

“The BV-AECOM joint venture is proud to partner with PUB to continually set global standards in integrated water management that ensures sustainable high quality water for Singaporeans. This award is a milestone in our partnership with PUB, and we look forward to contribute further to new advances in Singapore’s water management efforts,” said Billy Wong, Regional Executive for Southeast Asia at AECOM.

A superhighway for used water management, the DTSS is a core water infrastructure which provides a cost-effective and sustainable solution to support Singapore’s continued growth and meet its long-term needs for used water collection, treatment, reclamation and disposal.

The DTSS uses deep tunnel sewers to convey used water entirely by gravity to centralised WRPs located at the coastal areas. The used water is then treated and further purified into ultra-clean, high-grade reclaimed water called NEWater, with excess treated effluent discharged to the sea.

DTSS Phase 1, comprising the North and Spur Tunnels, the associated link sewers, the Changi WRP and outfall, was completed in 2008. A NEWater factory, located on the rooftop of the Changi WRP, was built in 2010 to facilitate large-scale water recycling.

The DTSS Phase 2 conveyance system comprises the South Tunnel which conveys domestic used water, the Industrial Tunnel for non-domestic used water and associated link sewers. Expected to complete by 2025, DTSS Phase 2 will extend the deep tunnel system to cover the western part of Singapore, including the downtown area and major upcoming developments such as Tengah Town and Jurong Lake District.

Under DTSS Phase 2, a NEWater factory to be integrated with the Tuas WRP will be built to facilitate water recycling, contributing to the goal of increasing NEWater supply from 40% to up to 55% of total water demand in the long term. Tuas WRP will also be co-located with NEA’s Integrated Waste Management Facility (IWMF), to harness potential synergies.

The completed DTSS will also streamline the used water network with three centralised collection and treatment points: Changi WRP in the east, Kranji WRP in the north and Tuas WRP in the west.

About the Global Water Awards

Each year, the coveted Global Water Awards are presented at the Global Water Summit, the major business conference for the water industry worldwide. Established in 2006 by Global Water Intelligence, the awards recognise the most important achievements in the international water industry within several categories, and reward those initiatives in the water, wastewater and desalination sectors that are moving the industry forward through improved operating performance, innovative technology adoption and sustainable financial models. The 2018 Global Water Awards were presented at the opulent Pavillon d’Armenonville in Paris, France on 16 April 2018, as part of the Global Water Summit.

PUB is a statutory board under the Ministry of the Environment and Water Resources. It is the national water agency, and manages Singapore’s water supply, water catchment and used water in an integrated way. PUB has ensured a diversified and sustainable supply of water for Singapore with the Four National Taps (local catchment water, imported water, NEWater, desalinated water). PUB calls on everyone to play a part in conserving water, in keeping our waterways clean, and in caring for Singapore’s precious water resources. If we all do our little bit, there will be enough water for all our needs – for commerce and industry, for living, for life.

AECOM is built to deliver a better world. We design, build, finance and operate infrastructure assets for governments, businesses and organizations in more than 150 countries. As a fully integrated firm, we connect knowledge and experience across our global network of experts to help clients solve their most complex challenges. From high-performance buildings and infrastructure, to resilient communities and environments, to stable and secure nations, our work is transformative, differentiated and vital. A Fortune 500 firm, AECOM had revenue of approximately $18.2 billion during fiscal year 2017. See how we deliver what others can only imagine at aecom.com and @AECOM.

[1] Used in the initial stages of wastewater treatment, primary settling tanks separate the solids from liquid wastewater by allowing solids to settle to the bottom of these tanks. The settled solids, also known as sludge, will be removed for biogas generation while the liquid wastewater is then sent for secondary treatment. Lamella primary settling tanks uses inclined plates which increases the maximum efficient surface area for solids to settle on with the same tank space.

[2] MBR technology is used in the treatment of wastewater. A bioreactor houses naturally-occurring bacteria which break down waste products in wastewater, after which microfiltration/ ultrafiltration membranes – with fine pores invisible to the eye – filter the remaining impurities. MBR is a more efficient method as it optimises the wastewater treatment process, enabling wastewater to be treated using less steps and less space compared to conventional systems, and produces a higher quality treated effluent. The treated water is then used as feedwater for NEWater production or supplied to industries.