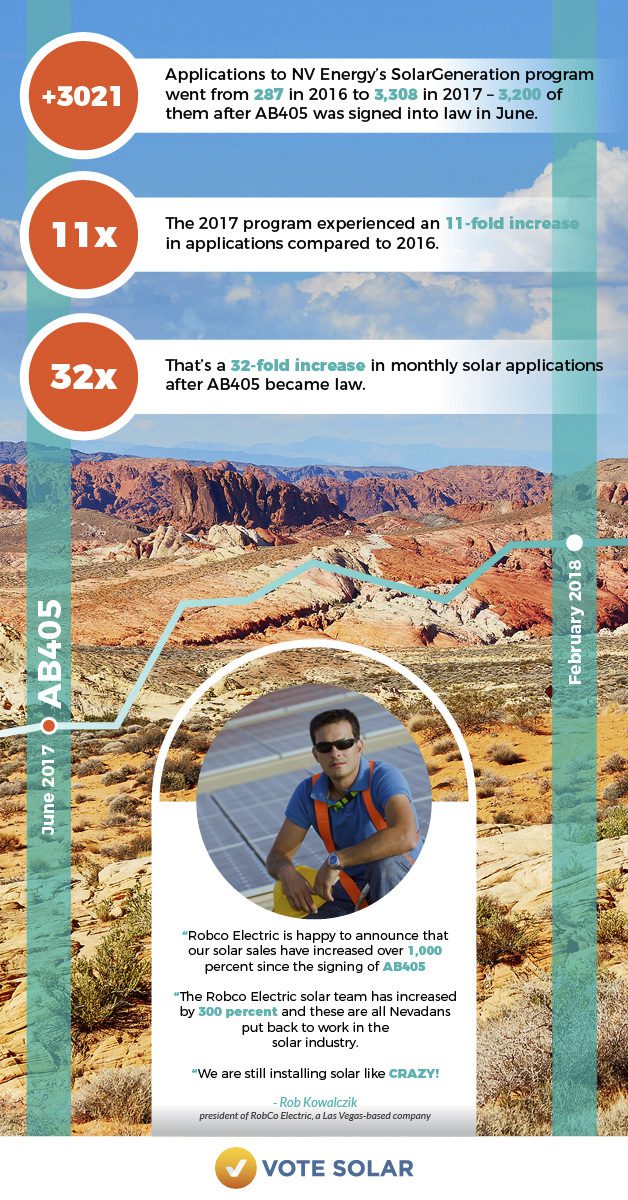 LAS VEGAS – The rooftop solar industry is shining once again in Nevada. NV Energy’s most recent annual plan noted a strong increase in applications for its SolarGenerations rooftop solar program following key state policy changes in 2017 that put the market back on track.

SolarGenerations applications went from 287 in 2016 to 3,308 in 2017, with most applications coming in the second half of the year, after AB 405 was signed into law. This represents an 11-fold year-over-year increase and early monthly data from 2018 indicates continued growth.  Solar advocates and industry leaders say Nevada’s rooftop solar success story shows how quickly a stable policy foundation can deliver economic benefits to the state.

“It’s exciting to see this important solar policy delivering for Nevada, clearing the way for families and businesses to go solar once again and invest in the state’s clean energy economy,” said Jessica Scott, Interior West director for Vote Solar. “We are grateful to the 2017 bill sponsors and many other champions on both sides of the aisle who worked so hard on behalf of the people of Nevada to bring solar opportunity back to the state.”

Nevada’s renewed rooftop solar growth is a remarkable turnaround from 2016, when a devastating ruling by the Nevada Public Utilities Commission ended the state’s rooftop solar net metering program, which stalled rooftop solar investment and killed thousands of local jobs. During its 2017 session, the Nevada Legislature passed and Gov. Brian Sandoval signed Assembly Bill 405 to reestablish fair net metering credits and clear the way for consumers to go solar once more.

The passage of AB 405 has also prompted news of local workforce expansion from solar companies that are growing to meet rising consumer demand for rooftop solar.

“We are installing solar like crazy. The Robco Electric solar team has increased by 300 percent, and these are all Nevadans put back to work in the solar industry,” said Rob Kowalczik, president of Robco Electric, a Las Vegas-based company.

“Before the ink was dry on AB 405 – Nevada’s landmark Solar Bill of Rights – I started rehiring dozens of our workers who I was forced to lay off just 18 months earlier because of anti-solar net metering changes. We hope legislators across the country look to Nevada and see that there is incredible voter demand for solar choice. All states should take strong steps to protect access to clean, affordable local energy,” said Larry Cohen, branch manager for Sunrun, a national solar installation firm with offices in Las Vegas.

“We were thrilled to have the opportunity to relaunch our business operations in Nevada last year,” said Vivint Solar CEO David Bywater. “Nevadans have eagerly embraced the return of solar energy, which has allowed us to provide local jobs and contribute to the state’s economy.”

AB 405 was one of nine clean-energy bills signed into law last summer in Nevada. Voters will have the opportunity to further advance the state’s growing clean energy economy this November with a ballot initiative that would increase the amount of renewable sources – such as wind, solar and geothermal – powering the state to 50 percent by 2030.

For a ready-made image illustrating the gains in Nevada’s solar industry, click here.

About Vote Solar: Since 2002, Vote Solar has been working to lower solar costs and expand solar access. A 501(c)3 non-profit organization, Vote Solar advocates for state policies and programs needed to repower our electric grid with clean energy.