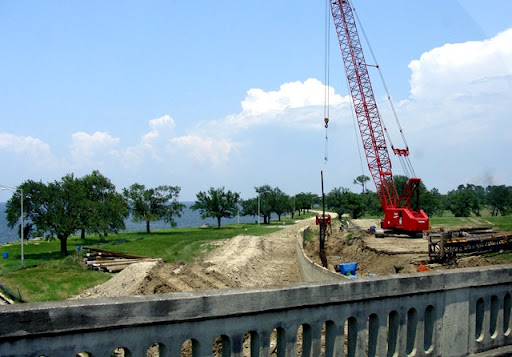 In administering the National Flood Insurance Program, the Federal Emergency Management Agency (FEMA) needs a more modern approach to analyzing and managing flood risk behind levees — one that would give public officials and individual property owners a clearer idea of the risks they face and how they should address them, says a new report from the National Research Council.  Because levees can reduce but not eliminate the risk of flooding, the agency should also encourage communities behind levees to use multiple methods to reduce risk and increase awareness of these risks.

While purchasing flood insurance is an effective way for property owners behind levees to deal with financial risk from floods, at this time there is no sound reason to extend the mandatory purchase requirement — which requires property owners with a federally backed mortgage located in the 100-year floodplain to purchase flood insurance — to areas behind accredited levees, the report says. The mandatory purchase requirement has not been effective at achieving widespread purchase of flood insurance in areas of the floodplain without levees; extending it to areas with levees – where the level of flood risk for many properties is unknown and where the challenges of risk communication are great — would not be a prudent step. Once the modern risk analysis has been put in place and matures, FEMA should study whether the mandatory purchase requirement is necessary throughout flood hazard areas and behind levees.

The report responds to a request from FEMA, which asked the National Research Council to examine the manner in which levees are addressed in the National Flood Insurance Program. In recent years extreme storms and hurricanes have caused increasingly disastrous flooding along U.S. rivers and coastal areas, with much of the damage occurring when levees failed or were overtopped by water.

Properties that are located in 100-year floodplains but protected by an accredited levee system  — one built to withstand a flood that has a 1 percent chance of happening each year — are exempt from the requirement to buy flood insurance. As FEMA began to modernize its flood maps in 2003, however, it became apparent that some accredited levees no longer met the standard of protecting against a “1 percent annual chance” flood. In establishing flood insurance premium rates, FEMA considers a non-accredited levee to be the same as no levee at all; this meant that communities protected by levees that do not meet the standard would be considered “without levee” and required to buy flood insurance at the same rates as those with no levees.

At the urging of Congress, the FEMA administrator instructed the agency’s staff to replace its current “without levee” approach with one that would better reflect the flood risk in areas impacted by non-accredited levees. In response, FEMA is developing a new approach, the Levee Analysis and Mapping Procedure (LAMP).

Although the LAMP approach is technically sound, gives some credit to non-accredited levees, and responds to Congress, it is a short-term response and is not based on modern risk-based analysis, the report says. It recommends that FEMA not implement the LAMP approach and instead focus its efforts on moving to a more modern risk-based analysis. The report also proposes interim steps to deal with non-accredited levees.
The flood risk analysis recommended by the report would use 21st century computational and mapping techniques to produce state-of-the-art risk estimates for all areas that are vulnerable to flooding. It would assess how well levee systems are likely to perform, taking into account the probabilities that the many components of a system will function as designed. Such an approach would give individual property owners a more accurate view of the risks they face and inform communities of their levee systems’ limits and potential vulnerabilities. It would also be able to account for any partial protection offered by non-accredited levees.

The report also concludes that the National Flood Insurance Program is using a sound actuarial approach for calculating rates for the flood insurance policies it issues. However, the program is financially unsound overall because it is legislatively mandated to offer discounts on about one-fifth of the policies it issues. Rate setting for properties behind levees would be improved by using the modern risk analysis.

FEMA should encourage communities to develop and implement multi-method strategies to manage flood risk. In addition to structural methods such as levees and floodways, communities should consider non-structural techniques, which include flood-proofing, elevating or relocating structures, evacuation planning, and the purchase of flood insurance.

FEMA also should work with local communities to communicate flood risk to the public, following principles for effective risk communication, such as delivering the information at a local level and using consistent, repeated messages.  Communicating flood risk is challenging, the report notes; for example, many people misunderstand “100-year floodplain” to mean that the area will only be flooded once every 100 years, when in fact it means that each year the area has a 1-in-100 chance of being flooded.  A property located in the 100-year floodplain has a 26 percent chance of being flooded at least once during the lifetime of a 30-year mortgage payoff period.

A first step in properly managing levee-related flood risk is to know the location, ownership, and condition of the nation’s levees, along with what assets and lives they are protecting – information that is currently unclear, the report says. Some levees are under the authority of FEMA, while others are overseen by the U.S. Army Corps of Engineers, and each agency has a complementary but separate database for keeping this information. A preliminary analysis indicates that approximately 3,400 miles of levees (66 percent) in the NFIP are in both databases and may be operating under the oversight of both agencies.  A comprehensive inventory of the nation’s levees needs to be completed, the report says.

Effective management of national flood risk requires sharing of responsibilities among all levels of government and the public and closer collaboration among federal agencies, especially with respect to risk communication, the report concludes.

The study was sponsored by the U.S. Federal Emergency Management Agency.  The National Academy of Sciences, National Academy of Engineering, Institute of Medicine, and National Research Council make up the National Academies.  They are private, nonprofit institutions that provide science, technology, and health policy advice under a congressional charter.  Panel members, who serve pro bono as volunteers, are chosen by the Academies for each study based on their expertise and experience and must satisfy the Academies’ conflict-of-interest standards.  The resulting consensus reports undergo external peer review before completion. A committee roster follows.