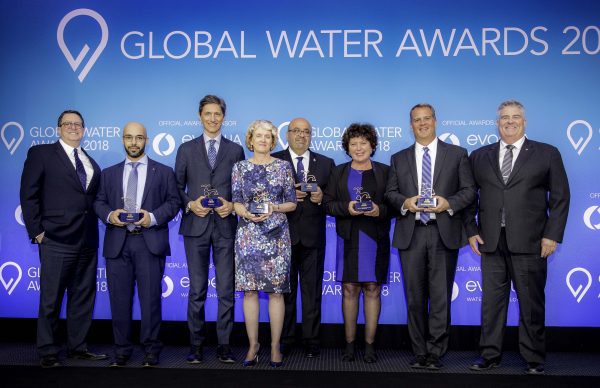 Paris, France – The Leading Utilities of the World (LUOW) network inaugurated six new members during the Global Water Summit (GWS) 2018. With the latest inauguration, the LUOW network now includes 28 members in total, all of which represent the gold standard of utility innovation and performance.

Following the inauguration ceremony in Paris, which marked the first anniversary of LUOW, its utility network now includes 28 members, spanning 13 countries and featuring more than 80 innovations.

The inauguration took place on Day 1 of the GWS, and the six new utilities accepted for LUOW membership were:

The six new member utilities were approved and accepted into the network by the LUOW Advisory Board, which in Paris included an additional honorary Advisory Board member from among the current network: Los Angeles Department of Water and Power, represented by Martin Adams.

In order to join LUOW network, representatives from each of the utilities were required to present their three innovation successes, out of 14 potential innovation areas of the network. At this event, there was a particularly strong focus on water resource development, with four of six new members presenting their innovations in this area.

These innovations include the Department of Energy in Abu Dhabi finishing the biggest artificially desalinated water reserve ever built, providing sufficient drinking water for one million people for up to 90 days. Meanwhile Anglian Water played an important role in developing first time ever a multi-sector water resource strategy for the East of England, and LA Sanitation increased local water supply by capturing, infiltrating, and reusing more storm water and providing integrated water management solutions. PWN, another new member to the network, installed the longest (4,600 meters) and deepest (85 meters below sea level) drinking water pipelines in the world.

Adel Hagekhalil from LA Sanitation stated: “LA Sanitation is proud to be part of a distinguished network of innovative utilities across the world, addressing water challenges while implementing innovative tools and practices to improve performance and service. Sharing successful and innovative experiences, technologies, and practices as part of this network is a great benefit to LA Sanitation and will forward LA Sanitation’s mission to protect the public health and the environment by ‘connecting the dots, drops and hearts’.”

“Los Angeles is facing many challenges like many other utilities including climate change, drought, and water quality. To address these challenges, we need to increase resource recovery, implement advanced business intelligences practices, and integrate innovative solutions to forward LA Sanitation’s mission. The (Leading Utilities of the World) network can provide us access to successful practices across the world.”

The LUOW network will next come together at the Singapore International Water Week (SIWW) on 8-12 July 2018. SIWW 2018 will feature the next inauguration ceremony, where five utilities will present their successes in the network’s innovation areas and be accepted for LUOW membership.

Find out more about the Leading Utilities of the World Network and its activities: www.leadingutilities.org

The Leading Utilities of the World is an initiative of the Global Water Leaders Group.