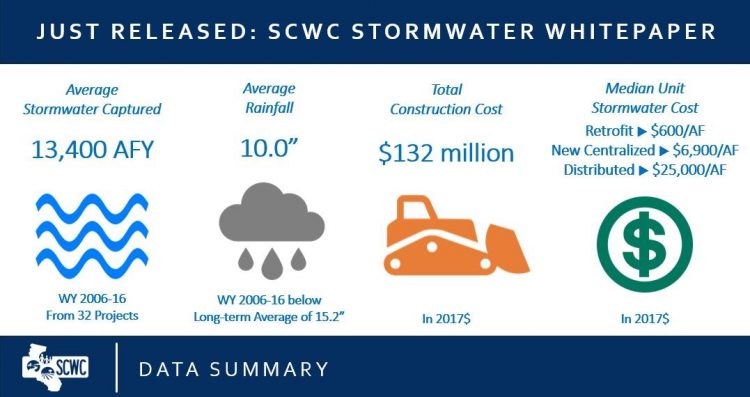 Los Angeles, CA – Today the Southern California Water Coalition (SCWC) released a first of its kind whitepaper, Stormwater Capture: Enhancing Recharge and Direct Use Through Data Collection, assessing the cost and performance of current stormwater capture projects across the Southern California region – and what results could mean for future projects.

A follow-up to a 2012 conceptual focused whitepaper, SCWC’s Stormwater Task Force analyzed data from six different water agencies on 32 active projects to determine each project’s cost per acre-foot of captured stormwater. Costs ranged from $59 per acre-foot to more than $250,000 per acre-foot.

The whitepaper found that:

SCWC’s Stormwater Task Force will continue to move forward with its data collection and monitoring efforts. It will be important for the region to collaborate and exchange stormwater data between all parties, and potentially consolidate the information into a single database.

“Given that cost and climate uncertainties may continue to be a barrier for some projects, SCWC believes in an all of the above approach when it comes to ensuring the security and reliability of Southern California’s water supply,” said Charles Wilson, Executive Director of the Southern California Water Coalition. “Southern California as a region should continue to invest in a broad range of water supply alternatives including, investments in imported supply reliability, recycled water, desalination, groundwater cleanup and stormwater capture.”

Whitepaper Background:
In the spring of 2016, the Task Force embarked upon an ambitious data gathering project to get actual monitoring data – manually and/or automatically measured – for stormwater projects in Southern California. The Task Force developed a detailed data collection form to acquire actual stormwater and urban water runoff capture volumes, costs, benefits, and performance of existing stormwater projects. The form was distributed to 30 agencies across Southern California. Of 54 projects, 32 projects (from six different agencies) had complete data and were analyzed.