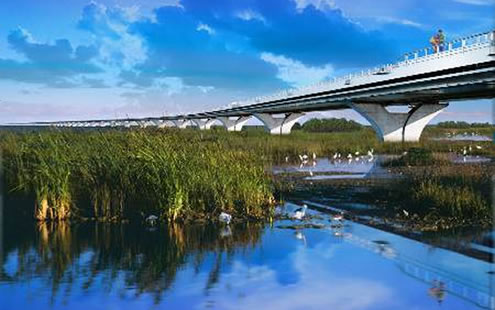 Secretary of the Interior Ken Salazar today joined Assistant Secretary of the Army (Civil Works) Jo-Ellen Darcy and other local officials to celebrate the completion of a one-mile bridge over the Tamiami Trail, the last structural component of the Modified Water Deliveries (MWD) project to restore natural water flows to the Everglades.

“Thanks to a remarkable partnership between Federal agencies, Members of Congress, the State of Florida, and the many stakeholders here in South Florida, we have reached a historic day in the long quest to restore the water flows vital to a renewed and healthy Everglades,” Salazar said. “With the completion of this bridge and the Modified Water Deliveries Project, we are moving ever closer to our goal of restoring the River of Grass to ensure the health of this iconic landscape for future generations to enjoy while creating jobs and boosting Florida’s economy.”

“Today marks a critical milestone for the Tamiami Trail Modifications Project. This one-mile bridge will allow a 92 percent increase in flows to Everglades National Park,” Darcy said. “But, there is still more to do. With the support of the Administration, the state of Florida and our partnering agencies, we will continue our work to restore this American treasure.”

Originally initiated by Congress as part of the 1989 Everglades Expansion and Protection Act, the MWD project aims to improve water deliveries into the park. The $81-million bridge, located in Miami-Dade County adjacent to the northern boundary of Everglades National Park, is part of the largest construction project in the history of the National Park Service. It will increase water flow by 92 percent over current levels to Northeast Shark River Slough and rehydrate and restore the 104,000-acre East Everglades portion of Everglades National Park, which Congress added to the park in 1989, all the way down to Florida Bay.

Florida Governor Rick Scott said, “This is great news for Florida and the Everglades. This project is a perfect example of how we can grow economic opportunities for Florida families while enhancing our state’s natural habitats. We must build on this great work to protect our state’s everglades – and that’s why my Florida Families First Budget invests $60 million to protect and restore this natural treasure.”

The increased water volumes and improved flow distributions will re-establish seasonal water depths and flooding durations that are critical to the survival of many fish and wildlife species, including the federally endangered wood stork, Everglade snail kite, and Cape Sable seaside sparrow, as well as the state-listed Roseate spoonbill.

“The success of our partnership to complete Mod Waters will provide a foundation for other restoration projects as we address the need to improve the quantity, quality, timing and distribution of the water that makes the Everglades a unique ecosystem,” said National Park Service Director Jonathan B. Jarvis.

Salazar highlighted the significant progress he has seen on his 11 visits to the Everglades during the past four years, including a record number of construction groundbreakings and tens of thousands of acres of land protected or acquired for restoration projects and storm water treatment that will significantly reduce nutrient pollution entering the Everglades.

President Obama has made restoring the Everglades a national priority. Using the partnerships and community-led approach that is a hallmark of the President’s America’s Great Outdoors initiative, the Administration has reinvigorated federal leadership in Everglades restoration; since 2009, this leadership has included the investment of $1.5 billion in Everglades projects and initiatives that will make a measurable impact on the ground. Nearly $900 million of this funding was used to jump-start key construction projects to restore water flow and essential habitat. Last July the Administration released a report outlining the historic federal investments and progress made in Everglades restoration under the leadership of President Obama.

@ARTBA, Construction Industry Allies Develop COVID-19 Guidance Materials https://t.co/NrHKzg16ML
3 hours ago
@FTA_DOT Makes Emergency Funding Available for #Coronavirus Needs https://t.co/3j7xg4ITu9
1 week ago
@OnScaleInc OnScale is Providing Free Cloud Core-Hours to Customers to Mitigate Engineering Productivity Loss Relat… https://t.co/2kznD1Kh0d
2 weeks ago
You can also visit our website (https://t.co/5ChDhKH2IT) to verify the latest conference cancellations and postpone… https://t.co/DhAiikvEtB
2 weeks ago
With limitations on travel and working from home becoming mandated across the country and globe, please feel free t… https://t.co/OTQosM2hWP
2 weeks ago
it will be “business as almost usual” here at Informed Infrastructure. All of the contact information you find in t… https://t.co/osIMDhV6bP
2 weeks ago
STAY SAFE OUT THERE: In these trying times, we aim to be a vital resource for our readers and the engineering commu… https://t.co/qFrDnwEbKv
2 weeks ago
@aisc Cancels 2020 #NASCC: The Steel Conference Due to Coronavirus Threat https://t.co/Dd0Nv4nRxI
2 weeks ago
Structural Engineers Foundation Fred Haas Scholarship https://t.co/UDaFz3eW9N @SEAOIYEC
1 month ago
The Washington State Department of Ecology has recently found that Bio Clean’s WetlandMod®, a horizontal flow biofi… https://t.co/YDd90gMra5
1 month ago