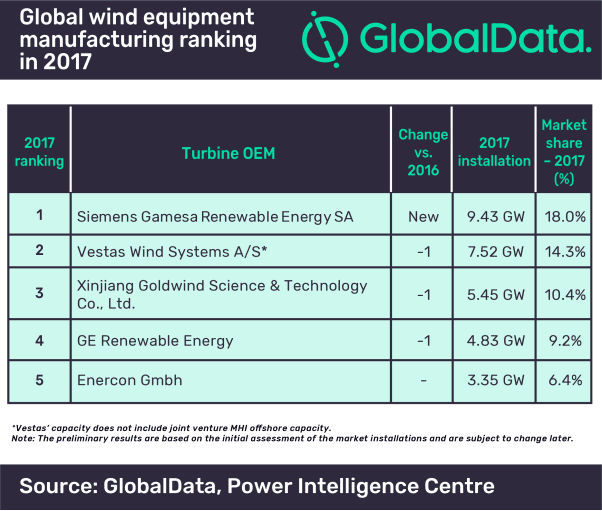 Siemens Gamesa Renewable Energy SA (SGRE) claimed the top spot for the wind turbine manufacturing sphere in 2017, managing to install an impressive 9.43 gigawatts (GW) and overtaking Vestas, which ranked second with 7.52 GW of installations in 2017, according to GlobalData, a leading data and analytics company.

SGRE gained ground with a 26.4% rise over the previous year’s installations, while Vestas saw a 14% fall in installations in the same period. Goldwind came in third, followed by General Electric (GE) – both dropping one place compared to last year – and Enercon was fifth.

GlobalData’s research found that the top five turbine manufacturers accounted for nearly 58% of the total installed capacity in 2017, up almost 7% on the previous year.

Ankit Mathur, Practice Head for Power at GlobalData, comments: “The recent merger of Gamesa and Siemens created a strong position in the industry across the onshore and offshore space. The competitive advantage of larger size and scale, along with good geographic diversification, provided the necessary push enabling it to claim the top spot.

“As a result of merger synergies, SGRE’s wide product mix, global presence, and strong position in the offshore wind sector should help to safeguard its lead over the closest competitors.”

Vestas could not hold onto the top spot it attained last year against the synergies and vast geographic spread of SGRE. The company recently released a report exploring the wind turbine market, which stated that Vestas had performed strongly throughout all regions – with particularly high activity levels in Canada, Mexico, Argentina, China, and India. With an all-time high order backlog and increasing offshore activities, Vestas will be aiming to retake the lead in the coming years.