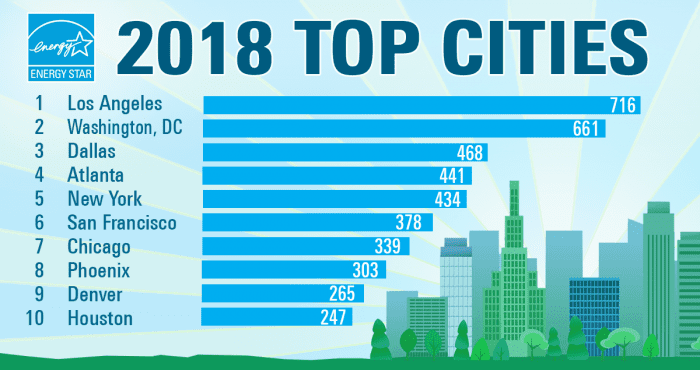 “Earning a spot in the ENERGY STAR Top Cities ranking demonstrates a city’s commitment to cutting building-related energy costs and reducing waste,” said Bill Wehrum, Assistant Administrator for Air and Radiation at EPA. “With help from ENERGY STAR, city leaders and building owners are working together to strengthen their economies, foster competition, and create a healthier environment.”

To create the annual list, EPA tallies the number of ENERGY STAR certified buildings within each metropolitan area, as defined by the U.S. Census. These areas include the city itself as well as surrounding towns and suburbs. This year’s Top Cities are:

The Top Cities list shows how cities across America are embracing energy efficiency as a proven path to financial savings and a healthier environment. Commercial buildings are responsible for 19 percent of the nation’s energy use and cost American organizations and cities more than $100 billion per year in energy bills. By the end of 2017, more than 32,000 buildings across America had earned EPA’s ENERGY STAR certification. Together, these buildings have saved more than $4.5 billion on energy bills and prevented greenhouse gas emissions equal to the annual electricity use of more than 3 million homes.

Commercial buildings that apply for EPA’s ENERGY STAR must have their performance verified by a professional engineer or a registered architect. ENERGY STAR certified buildings use an average of 35 percent less energy than typical buildings. Many types of commercial facilities can earn the ENERGY STAR, including office buildings, schools, hospitals, and retail stores.

ENERGY STAR® is the government-backed symbol for energy efficiency, providing simple, credible, and unbiased information that consumers and businesses rely on to make well-informed decisions. Thousands of industrial, commercial, utility, state, and local organizations—including more than 40 percent of the Fortune 500®—rely on their partnership with the U.S. Environmental Protection Agency (EPA) to deliver cost-saving energy efficiency solutions. Together, since 1992, ENERGY STAR and its partners have helped save American families and businesses over $450 billion and over 3.5 trillion kilowatt-hours of electricity while also achieving broad emissions reductions – all through voluntary action.Join the millions already making a difference at energystar.gov. More background information about ENERGY STAR can be found at energystar.gov/about and energystar.gov/numbers.