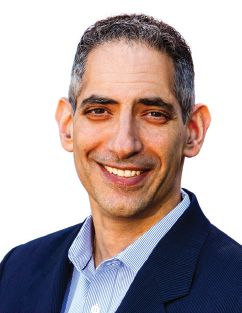 Alan Russo is senior vice president of sales and marketing at REC Solar, which recently partnered with Cal Poly San Luis Obispo to finance and build a new 18.5-acre solar farm that will generate more than
11 million kWh per year—about 25 percent of Cal Poly’s electricity needs, producing $10 million in savings over the life of the system.

Cal Poly, part of the 23-campus California State University system, chose to go beyond state mandates in its 2014 Sustainability Policy, aiming to reduce its greenhouse gas emissions to 80 percent below 1990 levels by 2040—10 years ahead of the state goal.

Its first energy project since then has been to build a new solar farm that generates enough electricity each year to power more than 1,000 homes. Cal Poly partnered with San Luis Obispo neighbor REC Solar to design, construct and maintain the solar facility.

“Our DNA runs deep with Cal Poly, given that our founders came from Cal Poly, and about half of our engineering organization are all Cal Poly graduates,” notes Russo. “So we feel like we have a fundamental understanding of that location and that organization’s needs. In fact, the lead engineer on that project worked as his thesis a project to study what a ‘net zero campus’ would look like. So this project, from his perspective, was 10 years in the making.”

REC Solar is 100-percent owned by Duke Energy, part of the Duke Energy Renewables Division. They principally perform solar engineering, procurement and construction (EPC), but also do all of the customer acquisitions, sales, construction, finance, and operations and maintenance.

Russo notes that solar technology now is very mature and fairly standard across providers. The difference at REC Solar is that it’s part of an end-to-end energy company.

“The customers we call on are looking to execute a broader energy strategy and, as part of that, a renewable energy strategy,” he adds. “That not only helps them attain certain sustainability goals, but also competitive advantage in the markets that they compete.”

The Cal Poly project uses a “power purchase agreement,” which means Duke Energy becomes the “owner” (for 20 years) and pays the upfront costs of construction and materials. Cal Poly then acts as the “customer,” paying an electricity bill at pre-negotiated prices.

“It allows you to build a solar plant on your property and buy electricity the same way you do today from a utility,” adds Russo. “But instead of buying from the utility, you’re buying your electricity from the owner of the solar plant.”

A unique aspect of the Cal Poly solar farm is the program of “Learning by Doing,” which was established by both parties from the onset of the project. REC Solar developed a solar curriculum and other means of academic enrichment for school students, so they can learn as the farm is being built and deployed.

The university created a solar engineering and microgrid laboratory in the Electrical Engineering building for students to conduct experiments with solar technology in a hands-on environment. And a wide variety of solar farm performance data will be continuously measured and made available through a web-based dashboard to aid in solar technology research. In addition, Cal Poly’s Animal Science program will use the site to research vegetation management practices for utility-scale solar farms by grazing the site with its sheep herd.

“We take the students through the development of a solar farm and let them learn from all the inputs and outputs that actually make a successful project,” notes Russo.

The Overall Role of Solar Energy

Russo believes that there’s a revolution afoot in energy, including a large amount of renewable and clean energy technologies that are becoming viable.

“Solar is an anchor within that spectrum, but it’s an ‘and’ strategy, so wind is also going to be there,” he notes. “But those are intermittent sources. Solar doesn’t produce electricity when the sun’s not out. Wind doesn’t produce electricity when the wind’s not blowing. So these will be coupled with other technologies that are also rapidly evolving.

“All these emerging energy technologies are creating a new spectrum of opportunities or options for end users who want to invest in that direction or the utilities themselves that are looking to cost-effectively deliver renewable power,” adds Russo.