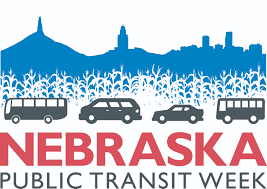 (Lincoln, Neb.) — Governor Pete Ricketts has proclaimed the week of April 8-14 as Nebraska Public Transit Week.  Nebraska Public Transit Week is a celebration and promotion of public transit across Nebraska, organized by the Nebraska Department of Transportation (NDOT), the Nebraska Association of Transportation Providers (NATP), and Advance Innovation in Research and Safety, in cooperation with Nebraska’s public transit providers.

Nebraska public transit had over 6.5 million riders in 2017 traveling more than 10 million miles combined. Public transit options, in both rural and urban communities, are vital to those who do not own or cannot use a personal vehicle.  This includes the 5.7% of households in Nebraska that do not have access to a vehicle.  Public transit provides a connection to medical care, education, and jobs for thousands of Nebraskans.

Public Transit Week promotes both urban and rural providers.  While Lincoln and Omaha have the largest ridership, they account for only two of the 69 transit providers in Nebraska.  Fifty-eight rural transit agencies combine to serve 84 of the 93 counties, most offering demand response service, where rides are booked ahead of time for stops to a specific destination at a specific time, similar to what Nebraskans experience with rideshare programs such as Lyft and Uber.

To celebrate Public Transit Week, transit agencies will be hosting events in their service areas.  We encourage the community to visit nebraskatransit.com to find events near them and join us as we celebrate our passengers and employees.  Members of the NATP and staff from NDOT and Advance will be attending events across the state to help agencies promote their services.

About the Nebraska Department of Transportation (NDOT)

The Nebraska Department of Transportation (NDOT) is responsible for the planning, development, design, construction, maintenance and administration of the state highway system.

About the Nebraska Association of Transportation Providers (NATP)

About Advance Innovation and Safety in Transit (Advance)

For media inquiries and additional information about Nebraska Public Transit Week, contact the

Nebraska Department of Transportation at 402-479-4694 or kari.ruse@nebraska.gov.