/ Analysis / The 10 Most Segregated U.S. Cities Visualized with GIS

The 10 Most Segregated U.S. Cities Visualized with GIS 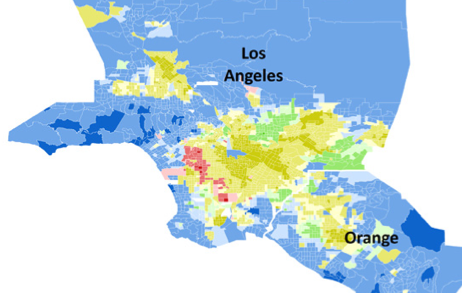 During the majority of the 20th century, the southern United States was considered the region with the most racism and segregation, and rightly so, however there is not a single southern US city in the top 10 most segregated American cities. The citizens and politicians of many southern states were largely opposed to legislation that would give minorities more rights, whereas citizens and politicians of northern states were much more progressive and willing to give civil rights to all citizens. Even now, I think many Americans share the opinion that the south is still behind the rest of the nation as far as racism goes.

Even though the maps show segregation, it’s not anything like the segregation of the early 20th century, where certain races were forced to live in a particular area. I think it’s likely that some of these groups choose to live among those similar to them. For example, hispanics who are new to the US would probably feel much more comfortable living near those who they can communicate with and relate to. It would be much more difficult to start a new life in a new country if you felt totally isolated.