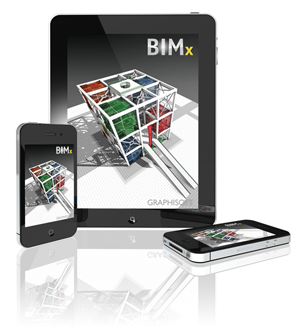 GRAPHISOFT announced today updates to BIMx mobile for iOS and Android devices, with the latest innovations for its cutting-edge communication and presentation tool for BIM projects.

The latest version of BIMx includes important bug fixes and new features such as:

With the real-time 3D Cutaway function, users can dynamically cut the BIMx model with a horizontal cutting plane. This offers a floor plan-like overview of the entire model allowing users to locate internal model parts that may be hard to find using the explore method.  3D Cutaway provides an easy-to-understand view for non-professional viewers.

The new rendering engine provides a shorter model loading time and a significantly better user experience during model navigation as a result of an increased FPS (frame per second) rate.  This results in two to three times faster on average loading time and less memory use, allowing larger models to be opened.

About BIMx
BIMx is an interactive environment that allows users to explore full BIM models without holding a license of the professional authoring software in which the building model was originally created.  With BIMx, ArchiCAD users have been able to publish self-running BIMx models for their clients to run on desktop computers (Win/Mac), as well as on iOS and Android devices putting BIM into the hands of all stakeholders not actively involved in the actual creation of the BIM model such as contractors, builders, clients, owners, and principals of design practices.

About GRAPHISOFT
GRAPHISOFT ignited the BIM revolution with ArchiCAD, the industry first BIM software for architects. GRAPHISOFT continues to lead the industry with innovative solutions such as the revolutionary GRAPHISOFT BIM Server™, the world’s first real-time BIM collaboration environment and GRAPHISOFT EcoDesigner™, the world’s first fully-integrated building energy modeling application that have fundamentally changed how architects worldwide design and collaborate today. Since its 2007 acquisition, GRAPHISOFT has been part of the Nemetschek Group.