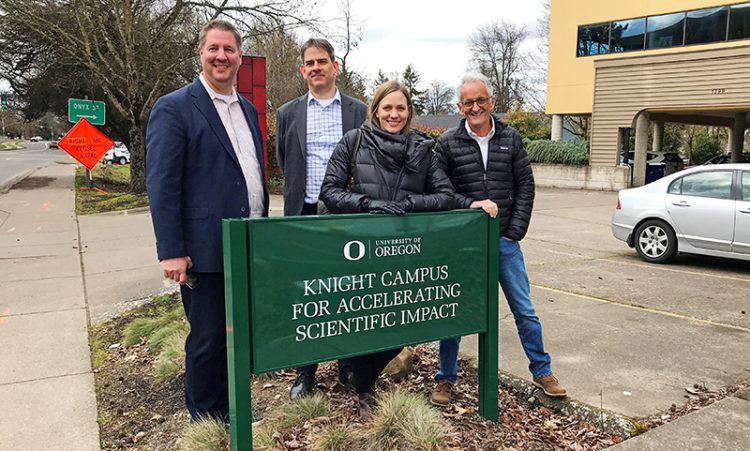 As University of Oregon students hit the books this spring term, shovels hit the dirt for the first phase of the Knight Campus for Accelerating Scientific Impact, which broke ground March 2 in Eugene, Oregon. Working in collaboration between its Seattle and New York offices, Thornton Tomasetti is providing structural, bridge and façade engineering services to New York-based Ennead Architects, the design architect, and Portland-based Bora, the architect of record, for the project. The facilities are named for Phil Knight, the co-founder of Nike and an UO alumnus, and his wife, Penny, who donated $500 million toward the $1-billion science campus.

Phase one of the project consists of a pair of four-story, 75,000-square-foot, L-shaped buildings and a pedestrian bridge featuring a symmetrical arched butterfly design. Image courtesy Bora/Ennead.

The two buildings are joined by a lightweight, translucent canopy, underneath which is an elevated terrace. Image courtesy Bora/Ennead.

Located in a highly seismic region, the steel and concrete buildings feature a double-glass exterior, steel penthouses, mezzanine floors designed with cross-laminated timber and a 120-foot-long, cable-supported canopy connecting the two facilities. The laboratory floors are designed to house equipment that is especially vibration sensitive.

The buildings’ southern façades consist of glass panels designed to emulate cascading water, while the north elevation features a transparent glass curtain wall system that reveals the buildings’ structure. A bridge designed by Thornton Tomasetti’s special structures group will connect the new facilities to the core campus, passing over the university’s busiest thoroughfare, Franklin Boulevard. A self-supporting spanning element, the bridge features a symmetrical arched butterfly design. It consists of two splayed arches extending from a common support point on each side of the boulevard. The bridge enclosure is supported by cables connected to the floor structure.

University president Michael Schill, left, and Patrick Phillips, professor of biology and acting executive director of the new facility, at the groundbreaking ceremony.

The campus was designed with input from a building user group made up of scientists, researchers, architects, and construction experts, who explored research facilities across the United States for insight into what makes for a truly interdisciplinary space. The phase one buildings are scheduled to open in 2020. The yet-to-be-designed phase two will add a 65,000-square-foot building, completing the 3-acre scientific research campus.