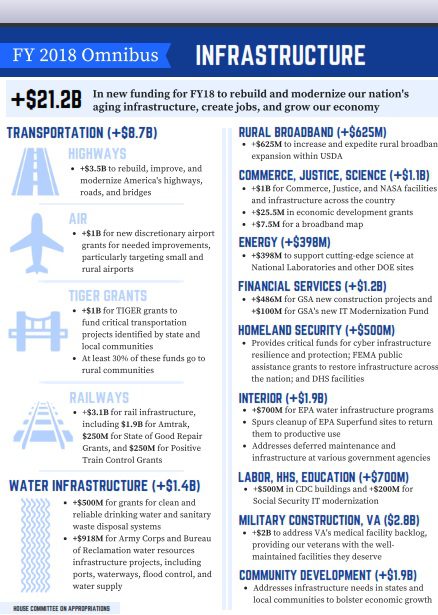 Congress is moving toward passage of a $1.3-trillion fiscal 2018 spending package that would increase funds for an array of federal infrastructure programs—including transportation, water and buildings—by a total of $21.2 billion.

The legislation, the product of bipartisan negotiations, cleared the House on March 22 by a 256-167 vote. It next goes to the Senate for floor votes. (View bill text here.)

The omnibus measure draws on a recent bipartisan budget deal that included an additional $10 billion for infrastructure, leaving it up to appropriations committees to fill in the specifics.

Appropriators spread the $10 billion, and then some, across the infrastructure landscape. (View fact sheet here.)

Transportation accounts are major beneficiaries, receiving $8.7 billion in additional funds.  Within transportation, highways leads the way, with a $3.5-billion increase from 2017 levels.

Of that total, about $1 billion would come from the Highway Trust Fund to meet the $44.2-billlion authorized level set in the 2015 Fixing America’s Surface Transportation Act. The other $2.5 billion would come from the general fund, with most of those dollars to be divided among the states according to their shares of the overall highway obligations.

Environmental Protection Agency water infrastructure funding also would climb, with $300-million increases for both the wastewater-treatment and drinking-water state revolving funds, the National Association of Clean Water Agencies notes. NACWA says the $600-million “represents the most significant new money for these programs in many years.”

The group also points to the separate $63-million allocation for the Water Infrastructure Finance and Innovation Act federal loan program.

The Army Corps of Engineers civil-works program would get a $789-million hike.

Moreover, some of the package’s $61.1-billion increase in defense spending will go for military construction. According to a House Appropriations Committee fact sheet, the measure hikes “mil con” spending by $2.4 billion, or 31%, from the 2017 level.

The measure also allocates $1.6 billion for border infrastructure, including $1.3 billion for new or replacement fencing or barriers.

In addition, the legislation would extend authorizations for FAA programs, including airport grants, for six months. (See bill text, Division M.) The extension would carry through September. The current stopgap FAA bill is due to expire on March 28.