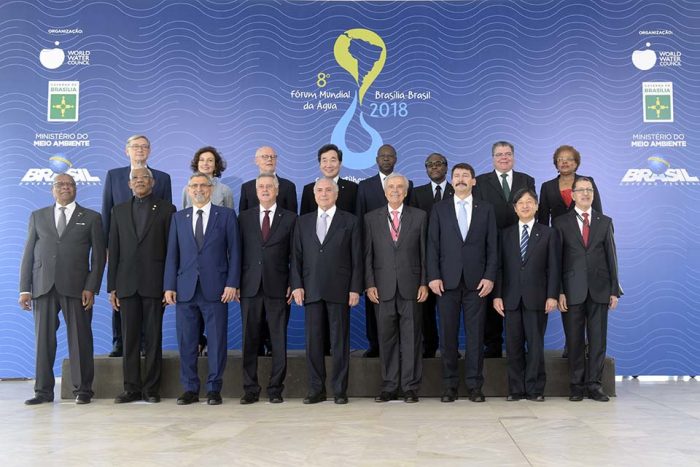 World Water Council – More than 840 million people worldwide, or 1 in 9, do not have access to basic drinking water services, and 2.3 billion, or 1 in 3, lack access to a toilet. “Around the world, more people have mobiles phone than toilets,” explains Matt Damon, water activist and actor. In a global effort to avoid widespread water crises and to improve access to safe drinking water and sanitation globally, the World Water Council organizes the 8th edition of its World Water Forum, which is currently underway in Brasilia from 18 – 23 March, coinciding with World Water Day.

Over 1,500 Journalists, and more than 12 Heads of State, including the President of Brazil, Michel Temer, President of Hungary, János Áder, President of Senegal, Macky Sall, South Korean Prime Minister Lee Nak-yeon, and His Imperial Highness the Crown Prince of Japan, alongside CEOs of fortune 500 companies, among many others, have travelled to the Brazilian capital to participate in 17 high-level panels and over 300 sessions, where the future of water security will be mapped out for the next three years. Throughout more than 300 sessions, ranging in specializations, including political, citizens, regional, sustainability, thematic, and special sessions, more than 20,000 attendees from 170 countries have come together in a 90,000m² space to find solutions for our world’s water security challenges.

The first World Water Forum was hosted by Morocco in 1997. Among its triumphs, the triennial World Water Forum has been instrumental in promoting the acknowledgment of Access to Water as a Human Right, which was finally recognized in 2010 by the UN. This came on the heels of the 6th World Water Forum (Istanbul, Turkey) where the fundamental nature of this right was defended at every turn.

Furthermore, the World Water Forum and its creator, the World Water Council, have played key roles in ensuring recognition for Sustainable Development Goal 6 (SDG), ensuring safe access to water and sanitation for all. This goal, set by the United Nations in 2015, is to be achieved by 2030. “Achieving water security demands pushing the boundaries impeded by competing uses for water exacerbated in a context of global changes. This World Water Forum is here to advance the paramount role of water and enable global change-sensitive decision-making,” explains World Water Council President, Benedito Braga.

The Southern Hemisphere hosts the World Water Forum for the first time, opening South America’s doors to dialogue and an exchange of experiences and best practices related to the use of water. This Brazilian edition will offer a Citizens Village, which welcomes all global citizens free of charge to participate in the debate through exhibitions, lectures, movies, arts & crafts workshops, entertainment, talk shows and gourmet food courts. The World Water Council invites everyone to be part of its flagship global water event.

The World Water Forum, attended by 300 local and regional authorities, 200 parliamentarians, and 100 official delegations, is also a crucial opportunity for global authorities to share knowledge and develop strategies for various issues, such as combating climate variability and water scarcity. By 2025, half of the world’s population will be living in water-stressed areas as droughts, floods and other water crises are plaguing many parts of globe, such as Cape Town, South Africa, or São Paolo. The Brazilian city’s main water supply, the Cantareria reservoir, was recently reduced to 5% capacity, comparable to just a month’s supply. The irony of this reality rests in the fact that Brazil hosts the world’s largest source of freshwater, 12% of the global supply.

Without water, there is no life, no food, no development. At the World Water Forum, under the over-arching theme of “Sharing Water,” in light of water’s role in uniting communities and tearing down barriers, decision-makers from around the world will band together to discuss and present recommendations in order to secure water for our future.

“Governments need to place water security at the heart of their national development strategies across all sectors and involving all stakeholders.  Experience shows us that we cannot achieve sustainable water resources management without engaging actors across sectors, from the energy sector, food production, or sanitation services,” explained World Water Council President, Benedito Braga, during the opening ceremony of the 8th World Water Forum.

Across the globe, some of the most pressing problems surrounding water are not about quantity, but quality. This is a matter of life and death for many worldwide; as 660 million people are without access to improved drinking water resources and 2.4 billion lack access to improved sanitation.

In particular, severely low levels of sanitation coverage are leading causes of death and disease across the globe; as recently as 2016, 8% of children under 5 died from diarrhea, which is usually caused by contaminated drinking water. Those without adequate sanitation access live primarily in Asia, Sub-Saharan Africa, Latin America and the Caribbean. Women and girls are affected the most by drinking water and sanitation issues, as they spend a collective 200 million hours per day collecting water.

World Water Day 2018 highlights “nature-based solutions” to current water-related challenges, often exacerbated by climate change, disasters and population growth. The World Water Forum will help demonstrate to leaders how a combination of existing infrastructure, geographic realities, natural resources, and adequate financing can lead to better water management. For every $1 invested in water and sanitation, the economic return in terms of averted health costs and productivity is $4.

Through the organization of the World Water Forum, the World Water Council (WWC), calls on all governments make water their top priority and encourages them to increase their budgets for sustainable multipurpose water infrastructure to ensure safe water for everyone on the planet and for different uses as well, like food and energy production, while safeguarding the environment. The fact that 80% of countries report insufficient financing to meet national drinking-water targets cannot continue to be a reality in the 21st Century. The need for renewed commitment and innovation is clear, as financing must triple to €90 billion per annum, taking into account operating and maintenance costs, to meet UN Sustainable Development Goal 6.