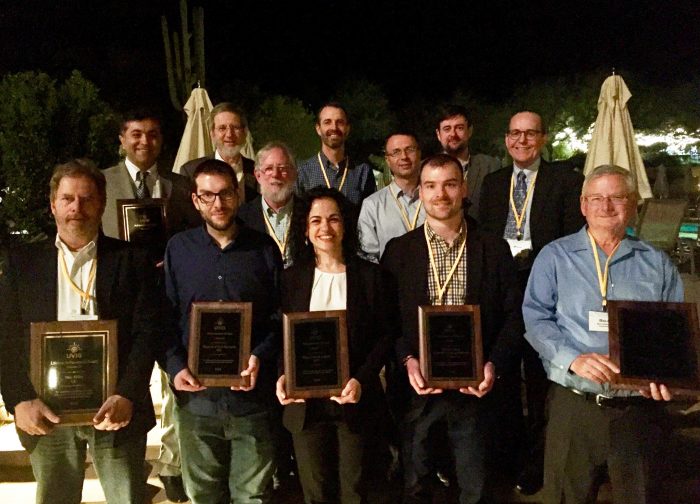 Tucson, Ariz. – During its annual spring meeting, the Energy Systems Integration Group, formerly known as the Utility Variable-Generation Integration Group, (UVIG), honored a diverse and deserving group of energy professionals from around the world for their contributions and accomplishments in the renewable energy industry.

“These award recipients have made major contributions to our industry and the UVIG organization, and they have been my mentors and colleagues on my own journey,” says Ahlstrom. “They have all made major contributions to the reliable and economic integration of renewable energy and, even more broadly, the planning and operation of the current and future electric grid.”

The Lifetime Achievement Award was presented to:

Nick Miller, GE – For sustained contributions to the integration of wind and solar plants into power system operations.

Achievement and Service Award recipients include:

EPRI – Jens Boemer – For assisting in building the foundation for bulk system reliability contributions from distributed resources in the update of IEEE 1547.

National Grid – Babak Enayati – For assisting in building the foundation for bulk system reliability contributions from distributed resources in the update of IEEE 1547.

Walling Energy Systems Consulting – Reigh Walling – For assisting in building the foundation for bulk system reliability contributions from distributed resources in the update of IEEE 1547.

GE – Sebastian Achilles – For contributions to the modeling and analysis of converter-fed wind plants on weak AC grids.

Arizona State University – Vijay Vittal – For contributions to the modeling and analysis of converter-fed wind plants on weak AC grids.

Carrie Dixon – Xcel Energy – For her two years of service to the UVIG Board of Directors.

Kris Ruud – MISO – For his three years of service to the UVIG Board of Directors.

Nick Miller – GE – For his three years of service to the UVIG Board of Directors.

Gary Thompson – Nebraska Public Power District – For his 19 years of faithful service to the UVIG Board of Directors.

During the meeting, UVIG also announced it is changing its name to Energy Systems Integration Group (ESIG). The new name reflects the non-profit educational association’s support for electric energy systems with higher levels of clean energy and emerging opportunities for coordination between electricity systems, natural gas systems, transportation systems, and a wide range of other energy and infrastructure pathways.

“Wind and solar energy are mainstream, so becoming the Energy Systems Integration Group reflects our ongoing commitment to help utilities and energy companies with their emerging technical challenges. Our members have become skilled at integrating renewables,” adds Ahlstrom. “Now they are working to improve the entire system and integrate an expanding range of energy companies and energy systems.”

For more information or to become a member of ESIG, contact Info@esig.energy, or visit www.esig.energy.