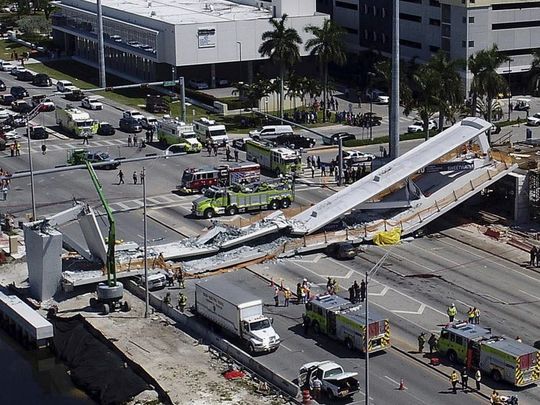 The pedestrian bridge in Miami that collapsed Thursday had only been put in place on Saturday under a process that allowed for installation of large sections — but that experts said left it vulnerable to collapse until it was complete.

The $14.2 million structure, which was scheduled to open in 2019, was intended to link Florida International University’s new dorms with off-campus housing above a  seven-lane roadway.

A 174-foot, 950-ton section of the bridge was hoisted into place on Saturday. When finished, the bridge would have been 289 feet long and 109 feet tall.

The bridge was being built under what is called “accelerated bridge construction” methods, which are championed at FIU. The methods basically allow larger pieces to be fabricated away from traffic, rather than assembling lots of smaller pieces above a busy road.

“FIU is about building bridges and student safety. This project accomplishes our mission beautifully,” FIU President Mark Rosenberg said after the Saturday installation.

The school said the Sweetwater UniversityCity Bridge was the largest pedestrian bridge moved through in that way in U.S. history.

Atorod Azizinamini, who heads FIU’s Civil and Environmental Engineering Department, called the strategy of building a major element of the span — the superstructure — outside of busy Eighth Street “a milestone.”

The designers would have created temporary supports for the large section installed Saturday to hold until it was connected permanently to the structure’s columns and foundation, according to Amjad Aref, a professor at the University at Buffalo’s Department of Civil, Structural and Environmental Engineering.

The next step in the construction would have been to permanently connect the span to the columns and foundation. When complete, the bridge would have been designed to carry the load of its own weight, pedestrians, bicyclists and anything else put on it.

“When collapses like this happen very quickly, it’s called instability,” Aref said. “Something triggered the system to quickly go through disproportionate collapse.”

The forensic study of why the bridge collapsed will focus on where the initial failure occurred in the temporary support.

“Think of Lego pieces,” Aref said. “Until you snap everything together, to become the whole system that will take everything from the top to the ground, if you are missing one piece, that structure could move. Normally that should be taken into account. You put some supporting system while it’s in the vulnerable state.”