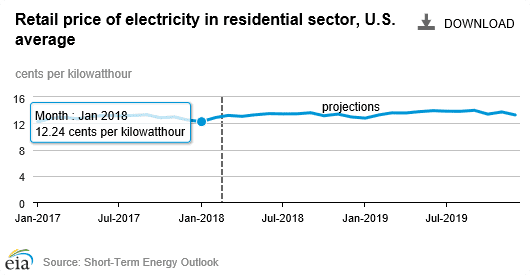 “Following record high gas inventory withdrawals in early 2018, the short-term outlook estimates that inventories for March 2018 will total 1,481 billion cubic feet, which represents a nearly 28% drop from March 2017. In fact, March 2015 was the last time inventories came close to that level.”

“EIA expects U.S. natural gas production to reach new records in 2018. The forecast suggests that production will near 82 billion cubic feet per day in 2018 and, as a consequence, inventory levels will fully recover from this year’s low levels by next winter.”

“The short-term outlook of utility-scale electricity generation remains relatively unchanged this month. EIA continues to expect natural gas’s share of utility-scale generation to increase from 32% in 2017 to 34% by 2019, and all indications suggest that it will continue to be the primary source for generation over the next 24 months.”

“The March short-term outlook maintains EIA’s forecast for reduced U.S. coal production, coinciding with decreased demand for exports. EIA forecasts steam coal exports will drop by 38% in 2018 and by another 10% in 2019.”