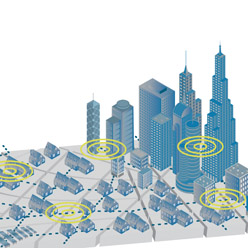 The correlation between smart cities and smart grids is strong.  Around one-third of the smart city projects that Pike Research is currently tracking in North America and Europe are primarily focused on smart grids or other energy innovations. Almost half of smart city strategies include energy-focused projects.

The huge investment being made in smart meters on both continents will provide cities with a platform for energy efficiency improvements, new customer services, and network optimization. Cities also provide important pilot environments for a range of smart grid innovations, including the integration of distributed renewable energy, support for EV charging, and the introduction of demand management programs.  Both city planners and utilities need to take a holistic view of these diverse developments.

In Europe, there are several long-standing smart grid/ smart city projects including the InovCity project in Évora, Portugal and Malaga Smartcity in Spain.  One of the United Kingdom’s most ambitious smart grid pilots, Low Carbon London, is a £30 million ($48 million) smart grid and energy efficiency project led by the local distribution operator, UK Power Networks.  Although primarily a pilot for smart grid technologies, the project has embraced a wide range of both technology and community-focused energy management issues that are closely aligned with smart city requirements. Similar developments can be seen in The Netherlands, France, Germany and most recently Italy.

Boulder’s ill-fated SmartGridCity project cast a shadow over North American smart city projects, but other cities have picked up the baton.  Smart City San Diego is building on a series of energy efficiency and smart grid initiatives promoted by local utility SDG&E, the San Diego Cleantech Cluster, and the city council. The Solar-to-EV Project at the San Diego Zoo, for example, has been given center stage in an iconic city landmark.