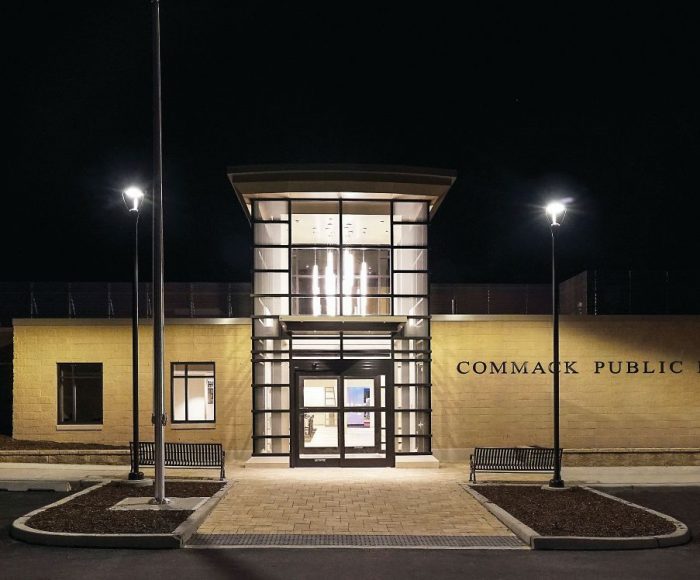 The renovated and expanded library features a two-story-high aluminum-andglass storefront entrance vestibule with an aluminum sunshade.

The beloved, 41-year-old Commack Public Library in Commack, N.Y., reopened following an $8.3 million renovation and expansion by general contractor Stalco Construction and Beatty Harvey Coco Architects (BHC). The renovation was financed through a voter-approved $7.8 million bond issue, with an additional $500,000 from the library’s capital improvement fund.

“Public libraries nationwide have undergone a dramatic functional change in recent years, transforming from what was once a simple depository of books into a multi-faceted community center that provides support and programs for all generations,” says Laurie Rosenthal, Commack Public Library director.

The building hadn’t received any significant upgrades since it was originally built in 1976, and it had become outdated and crowded, no longer serving the needs of the community. Children’s programs were taking place in the same space as adult events, there was no dedicated young-adult space, the facilities and furnishings were not comfortable for seniors, and the structure was not compliant with the Americans with Disabilities Act (ADA). That all changed with the renovation.

“We created a modern, 23,000-square-foot library that will serve its nearly 15,000 patrons for decades to come,” notes Alan Nahmias, Stalco president. “The updated and reconfigured space will support the educational, research, technological, recreational and entertainment needs of the community.”

In addition, Stalco significantly improved the building’s energy efficiency and brought it up to code, making all areas accessible to handicapped patrons. The construction manager for the renovation was SCC Construction Management Group, the structural engineering was performed by TDM Consulting Engineers, and the lighting design consultant was ChromaLD.

In terms of technology used, Tom Mirabile, P.E., a structural engineer with TDM Consulting, notes that the building was modeled using RISA-3D software, and the drawings typically were created in AutoCAD. He adds that the construction used steel components in traditional concrete foundations.

“In the beginning of the design phase, the library’s leadership defined the functional requirements for the renovation, which included expanding dedicated spaces for children and young adults, enlarging event and community facilities, specifying more comfortable furniture, improving telecommunications and audiovisual technology, and increasing the visibility of the building’s main entrance. These requirements reflected the new role of the library as a community and social center for local residents,” says Christopher Sepp, R.A., senior associate, BHC. 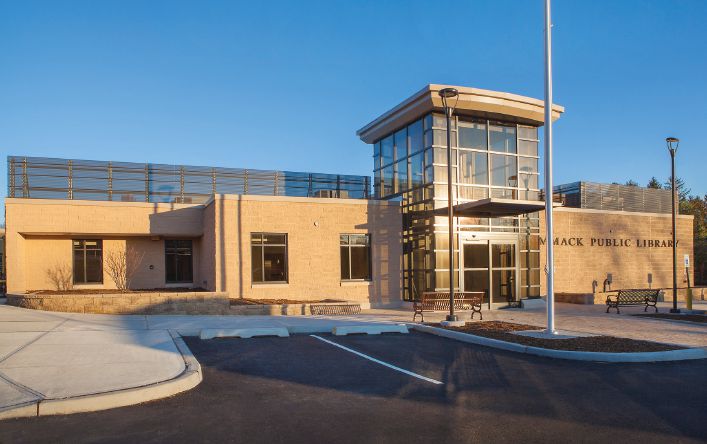 The entire building’s facade is made up of a ribbed splitface masonry block. Stalco relocated the main entrance to the parking lot side and built a prominent two-story, glazed entrance vestibule. 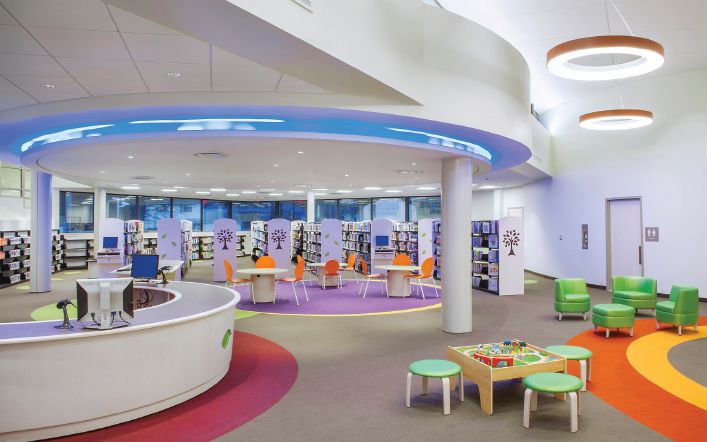 The redeveloped Commack Public Library houses a large children’s room designed to provide an enriching environment for children and families.

“We also addressed the strong angularity of the building by incorporating numerous circular elements into the interiors and increased the library’s visibility by adding a glazed, well-lit main entrance vestibule facing the parking lot,” he adds. “The previous entrance was not well defined; it was located away from the parking lot, and new visitors had difficulty finding it.”

“To increase the perceived height of the low ceiling in the lower-stack area, we specified extra-large ceiling tiles,” adds Sepp. “This section also houses circular niches with high reading tables and stools.”

Increasing the amount of natural light throughout the interiors was an important design goal. The upper-stack room features internal bay windows overlooking the children’s room and receives borrowed light from that section’s expansive, south-facing windows. The design team also maintained existing clerestory windows in the children’s and periodicals areas.

“All of the work was done with the use of sustainable and energy-efficient systems and materials to significantly improve the building’s operational efficiency, save money for years to come, and prevent the release of volatile organic compounds (VOCs) that could impact indoor air quality,” notes Jason Vasquez, Stalco’s project manager. 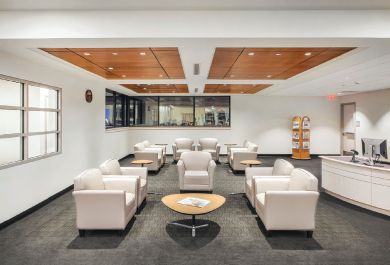 To visually indicate the periodicals section that’s adjacent and opened to the main reading room, the architects specified ACGI millwork ceiling panels above the reading lounge.The panels feature micro-perforations to improve the acoustical properties of this area.

Materials used included low- and no-VOC paint, low- and no-VOC adhesives and solvents, and new carpet tile made of recycled materials. The project also entailed the installation of a new high-efficiency HVAC system, LED lighting fixtures that cut the library’s lighting energy use by one-third, and the installation of furniture and furnishings that were produced through green manufacturing processes. In addition, Stalco installed energy-efficient exterior insulation.

The decorative curved ceiling soffits throughout the building’s main floor presented a construction challenge. To create the curving elements, the team built a curved frame for the ceilings and installed drywall over the frame. Fellert Acoustical Plaster was used in the corridor outside the circulation desk to dampen noise. Other ceilings are plaster or wood panels in some areas and acoustical tile in administrative sections. Most of the walls are sheetrock with Johns Manville acoustical insulation. Columns were finished with Petersen Aluminum Corp.’s PAC-CLAD aluminum column covers.

There was an existing elevator used only as a material lift to bring books up and down between floors. Stalco replaced that with a central elevator for use by patrons and employees.

“The design called for moving the elevator to the middle of the building to improve the circulation,” explains Vincent Marino, Stalco superintendent. “As such, we had to excavate and shore the entire area to accommodate the elevator.”

The team created a new entranceway by adding approximately 500 square feet to the existing structure, creating a storage area next to the main entrance as well as building an all-new glazed entrance vestibule. The new entrance features an expansive, two-story-high aluminum-and-glass storefront with an aluminum sunshade on it. The structure seems to soar into the air, well above the rest of the building, and features a cloud of tubular, vertical Acuity lighting fixtures suspended at different heights at the top of the vestibule. The sunshade uses 320 square feet of Laminators Inc. composite metal panels.

The entire building’s facade is made up of an unusual ribbed split-face masonry block that has a texture to it, unlike most masonry, which tends to have sheetrock or another type of architectural surface cover. Here, the textured lines of the concrete masonry units (CMUs) form the building’s entire finish. Modifications made to the building (such as the new entranceway) presented another construction challenge.

“As this type of CMU has long been discontinued, Stalco had to clean, salvage, and repurpose about 2,000 blocks that it then incorporated into the entryways and in closing the infill,” notes Marino. “This was very time-consuming, painstaking work that had to be perfect. When the team reinstalled the salvaged blocks, they were careful to match the lines.”

The construction team also had to perform extensive shoring at the new entrance and fabricate new steel structural elements to reinforce the building.

The scope of work called for the extra step of painting the entire structure, to ensure full visual uniformity. Stalco also installed a new, white roof of Versico Thermoplastic-Polyolefin Roofing, which will reduce solar heat gain and heat island effect to the environment at night. The team affixed a 1.5-millimeter flexible Bituthene System 4000 Waterproofing Membrane to waterproof the building’s foundation. The building also features a new perforated-aluminum mesh screen that provides a visual barrier hiding the rooftop HVAC equipment.

Below the building, site work included a drainage system to make way for a new, reconfigured asphalt-topped parking lot. The drainage included 20 leaching pools underneath the parking surface, and a new septic system for the library was placed below the parking area. Stalco also performed some landscaping work, including the installation of a new automatic irrigation system and the planting of a variety of trees, shrubs, grasses and groundcovers.