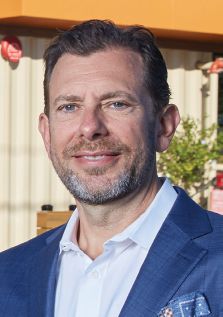 Jim Pickell, President of GrowthPoint Structures, aims to scale the company to meet the market demand that continues to rise, particularly from the recent combination of hurricanes, wildfires and decreasing public spending budgets.

V1 Media: Please provide a brief background of your education and career before GrowthPoint Structures.

Pickell: I work with hyper-growth, early stage, companies that are disrupting entire industries, usually bringing new technologies or proprietary approaches. I’ve worked to transform the distribution of film, bringing it online from VHS to DVD to the internet, alongside music and games. I’ve worked to bring education online to democratize education so great teachers can teach more than 34 kids, and I’ve worked to transform travel and the peer-to-peer sharing economy so people can swap homes and reduce the waste in vacancies across the world. All of those help eliminate waste and provide value to end users.

I am formally trained as an M&A attorney, and I also have an MBA. I use skill sets from all of these experiences and industries to every new adventure I start.

V1 Media: How’d you get involved in helping to transform industries? Was it something you wanted to get into, or did it find you?

Pickell: I get bored easily and I like to solve problems. I think there are some big hairy problems in society right now; there’s no lack of them. I get intrigued, and I think it’s very organic. I’ve never, in any of these, submitted a resume and said, “I’m a problem solver,” or describe my resume the way I just shared it with you. But you get deeper into these problems, and if you prove you’re capable of contributing to a solution, usually the people in the room trying to solve them recognize your contribution, and organically they play out into roles, often roles I never sought out.

V1 Media: Can you describe what GrowthPoint Structures does? How it’s “transitioning building to a factory-based modular model, moving the construction process from onsite to a product line,” and what that means?

Pickell: We start with empty single-use shipping containers that we import in the United States more than anyone in the world, and export far fewer. We use them to produce schools, housing and eventually rapid-deployment situations. And we bring “Henry Ford assembly line principles” into a factory to manufacture a product.

We start with a shell, and we demo some of the features, and capitalize on others such as the structural integrity of the frame. We cut openings into the walls for things like doors and windows, and they’re highly customizable. They’re also stackable, so we retain that structural integrity, and utilize the fact that containers are built within millimeters of each other to ISO standards. Right now, our tallest project under contract is five stories, but it’s feasible to go much higher. And while we’re constructing the modules in the factory for delivery, all site work happens concurrently. We’re not involved in that, and, in a typical building, you can’t really begin to develop the final product until the required site work’s complete.

With our product, we begin fabrication far prior to any site construction, so by the time the foundation is complete, we can drop the modules in place very quickly and substantially shorten the time it takes to achieve occupancy and final inspection approval.

Pickell: The main benefits are reduced cost due to less time in the construction phase, reduced labor due to increased efficiency of building, increased sustainability, and reduced operating and maintenance costs. Some people have this preconceived notion that modular, or the utilization of a shipping container, results in an unappealing product with a dull aesthetic; lack of efficiencies; lack of customization. And the concept of a container leads to some misconceptions that there are design constraints.

The reality is we deliver a very sustainable, highly efficient, highly customizable product; it doesn’t even need to look like a container. In reality, the shipping container costs less than five percent of the total product cost. It’s just a structural shell that we’ve developed a proprietary method to use, and we can help get people over these preconceived notions.

V1 Media: What are some techniques you use to help people get over their preconceived notions?

Pickell: A lot of people find us because they like the look, they like the idea of sustainability; and they’re the easiest to sell into. But a lot of our projects are sold into public-works projects or schools or whatnot—affordable housing—and there are always some in the group with hesitation. We need to educate them about the reduced costs and timelines to start, but the design has a lot to do with their hesitation, frankly, and just sharing photos of past projects we’ve worked on that we’ve completed, renderings of what we are working on that are in our pipeline, 3D renderings of projects, there are usually a lot of “oohs and aahs” in the room.

There’s a project called “Hope on Alvarado,” for example, that gets people really excited about what’s feasible. We allow everyone to express their concerns, and we try to address those not in a sales mode, but more in a problem-solving mode. What are your challenges? What are your issues? Can we help solve that and, if so, how? That also goes a long way.

V1 Media: How are GrowthPoint Modules different from other modules on the market?

Pickell: We’re one of the only modular builders in the U.S. using one-trip shipping containers. They carry dry goods from China to the United States. They’re essentially brand new; we reject probably 1 percent for warranty. Our final product, GrowthPoint Modules, is different in that we use that original framework of the container for the end product.

Some companies modify the integrity; they use pieces of it during the demo phase. We’ve developed plans that received approval across multiple regulatory bodies. Utilizing the structural framework and integrity, we build on that and ultimately build reinforced structural steel modules based on that container. That’s a big way we’re different.

Also, a lot of module builders use a technique similar to the way you build out onsite. Picture a timelapse of how construction works, and we’re bringing more principles—from almost all the manufacturing to watching an entire structure be built—down assembly lines with laser-focused automation; it’s an assembly line approach. Between those various factors, we’re fundamentally different from anyone out there we know about.

V1 Media: How might increased natural disasters or climate change affect the need and desirability for modular building?

Pickell: You’ve seen what’s happened recently with one of the largest fires in the history of California and the devastation that it caused. Our buildings can withstand severe weather conditions, where stick-built construction just can’t compete.

Take a hurricane or severe flooding. We’re a viable option for rebuilding entire communities very quickly, efficiently and cost effectively. Our product also can withstand some of the most severe weather conditions, and it gives owners and builders peace of mind.

Take the Getty. There are a lot of articles being written on how they didn’t even move the artwork out of the Getty. That’s the safest place for things to be, so severe winds, hundred-plus mile-per-hour winds, fires … Some stick buildings are built to withstand fire for a certain number of hours. Our containers are closer to non-combustible, and steel is always going to be more durable and have a longer useful life than wood.

V1 Media: You built a new facility in Carson, California. Can you tell me a little bit about that facility and what’s unique about it?

Pickell: It’s unique because of the culture we’re trying to portray and embody. There’s really very limited separation between the factory and office staff, and there’s this belief that what we do matters. Everyone values the work that everyone else is doing, but there’s a mission that’s larger than all of us. Every project I’ve ever worked on, I’ve been part of a mission.

I haven’t worked on getting the first man to Mars, but, to me, they all feel similar; we’re trying to accomplish this really large goal, and we’re all trying to make our processes and product better as we gain more knowledge and experience. Bringing a really diverse group of people, sometimes you need to bring in people outside of an industry to solve the challenges in an industry. I think that’s very unique.

Pickell: I think one of the slowest industries to adapt to change—and adopt new methods and technologies—has been construction. If you think about it, it’s as if every person in the United States needs a “custom-fit suit” for where they live right now; it just doesn’t make a lot of sense.

We’ve learned a lot through other industries, and I think whether we want it or not, and I think we do, I think it will bring efficiency. Disruption is coming quickly to the building industry, and I think it’s been a long time coming. But in a decade, it will, in many ways, be almost unrecognizable. I think people need to embrace that change, or they’re going to be left behind.