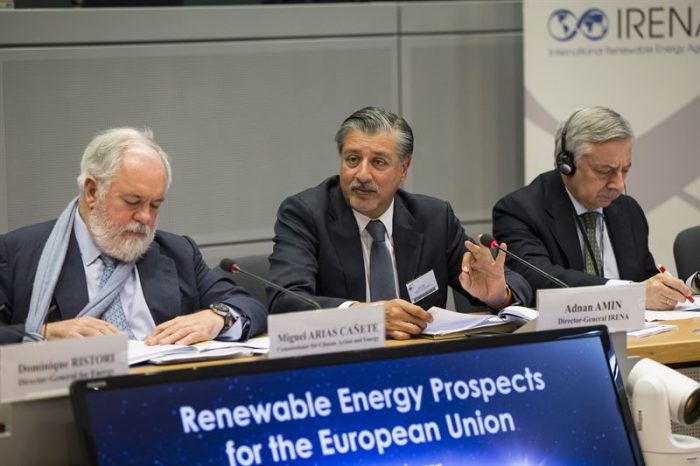 Brussels, Belgium — The European Union (EU) can increase the share of renewable energy in its energy mix to 34 per cent by 2030 – double the share in 2016 – with a net positive economic impact, finds a report by the International Renewable Energy Agency (IRENA), launched in Brussels.

Presenting the findings during a launch event, ‘Renewable Energy Prospects for the European Union’ – developed at the request of the European Commission – IRENA’s Director-General Mr. Adnan Z. Amin highlighted that achieving higher shares of renewable energy is possible with today’s technology, and would trigger additional investments of around EUR 368 billion until 2030 – equal to an average annual contribution of 0.3 per cent of the GDP of the EU. The number of people employed in the sector across the EU – currently 1.2 million – would grow significantly under a revised strategy.

Raising the share of renewable energy would help reduce emissions by a further 15 per cent by 2030 – an amount equivalent to Italy’s total emissions. These reductions would bring the EU in line with its goal to reduce emissions by 40 per cent compared to 1990 levels, and set it on a positive pathway towards longer-term decarbonisation. The increase would result in savings of between EUR 44 billion and EUR 113 billion per year by 2030, when accounting for savings related to the cost of energy, and avoided environmental and health costs.

“For decades now, through ambitious long-term targets and strong policy measures, Europe has been at the forefront of global renewable energy deployment,” said IRENA Director-General Adnan Z. Amin. “With an ambitious and achievable new renewable energy strategy, the EU can deliver market certainty to investors and developers, strengthen economic activity, grow jobs, improve health and put the EU on a stronger decarbonisation pathway in line with its climate objectives.”

Welcoming the timeliness of the report, Mr. Miguel Arias Cañete, European Commissioner for Energy and Climate Action said: “The report confirms our own assessments that the costs of renewables have come down significantly in the last couple of years, and that we need to consider these new realities in our ambition levels for the upcoming negotiations to finalise Europe’s renewable energy policies.”

The report highlights that all EU Member States have additional cost-effective renewable energy potential, noting that renewable heating and cooling options account for more than one-third of the EU’s additional renewables potential. Furthermore, all renewable transport options will be needed to realise EU’s long-term decarbonisation objectives.

Additional key findings from the report, include:

The report is a contribution to the ongoing discussions on the European Commission’s ‘Clean Energy for All Europeans’ package, tabled in November 2016, which proposed a framework to support renewable energy deployment.

Renewable Energy Prospects for the European Union is part of IRENA’s renewable energy roadmap, REmap, which determines the potential for countries, regions and the world to scale up renewables to ensure an affordable and sustainable energy future. The roadmap focuses on renewable technology options in power, as well as heating, cooling and transport. The REmap study for the EU is based on deep analysis of existing REmap studies for 10 EU Member States (accounting for 73 per cent of EU energy use), complemented and aggregated with high-level analyses for the other 18 EU Member States. IRENA is mandated to be the global multilateral framework for renewable energy cooperation and information exchange by 154 Members (153 States and the European Union). 26 additional countries are in the accession process and actively engaged. IRENA promotes the widespread adoption and sustainable use of all forms of renewable energy, in the pursuit of sustainable development, energy access, energy security and low-carbon economic growth and prosperity. www.irena.org