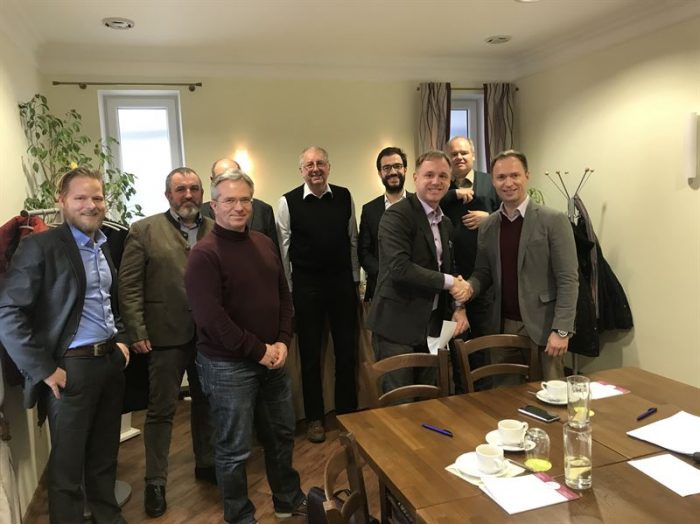 Climeon has received its first major order for a geothermal power plant in Germany, and its first order that will operate on original oil and gas infrastructure from the Bavarian energy provider Geoenergie Kirchweidach (GEK). On November 29 2017 Climeon entered a LOI with GEK and today GEK decided to proceed and placed the order value of over 5 MEUR. The order marks an important step in replacing fossil fuels with a sustainable geothermal baseload.

The deal will enable GEK to utilize the excess heat of the geothermal plant that today delivers heat to the local greenhouse business and the city of Kirchweidach. The geothermal resource was originally identified through the explorational drilling for oil and gas in the area.

The modular Climeon Heat Power system will work in conjunction with the heating and it is estimated that the first phase will annually deliver 14 000 MWh of electricity to the grid. The order is for 16 modules, with an option for GEK to order additional modules in a second phase to expand the production to more than 20 000 MWh annually. Baseload Capital Sweden AB will be involved in the financing of the deal.

Unlike other renewable energies, such as wind and solar, geothermal heat power is in service day and night throughout the year. It can provide the same regulating power as coal or oil-fired power plants, making it the best option to offer clean power in quantities large enough to replace fossil energy sources.

The Climeon Heat power system’s ability to create energy from low temperature water offers a possibility for extensive use of geothermal energy in most geographical areas. The deaI with GEK shows that geothermal heat power could play a major role in Germany’s strong commitment to shift into sustainable, clean energy solutions.

“The high efficiency combined with the modular solution made the Climeon heat power system the obvious choice for GEK. With this project we take an important step to begin providing clean Geothermal heat power to the beautiful municipality of Kirchweidach and later on to entire Germany” says Wolfgang Hageleit, Founder GEK

“To invest in Geothermal heat power is good for many reasons. A long-term electricity contract (PPA) as strong financial base and a reliable 24/7 power production makes this an attractive and low risk project at the same time as we can accelerate the transformation from fossil to green energy” says Magnus Brandberg, Founding partner, Baseload Capital Sweden AB

”We are very excited with this breakthrough order. Germany is leading renewable energy in Europe and geothermal heat power especially at low temperatures has every property to become the dominating source of renewable energy. GEK is with their extensive experience in the field the perfect partner to make sure the European entry is successful and can be scaled further. This deal, just like the ones we already have with Iceland and USA, again proves our competitiveness and we see now that we can be key player in the transition from fossil fuels to renewable energy.” says Thomas Öström, Founder and CEO of Climeon

This press release contains such information that Climeon AB (publ) is required to publish in accordance with the EU Market Abuse Regulation. The information was published for public disclosure on February 14, 2018, at 08:30 CET through the agency of the contact persons set out above.

About Geoenergie Kirchweidach (GEK)
Geoenergie Kirchweidach (GEK) and its owner Forever Green has had the ambition to build and run a geothermal power and heating plant in Kirchweidach and have a long-term plan to develop additional projects in Bavaria. The Kirchweidach Geothermal plant will feed electricity into the public grid provide district heating to the community and its inhabitants. The district heating network is replacing the traditional heating that was done with fuel oil, LPG or pellets. Furthermore a vegetable growing greenhouse of 12 hectars is heated all year round by the geothermal plant, saving at least 8,2 million kg of CO2 per year. GEK is the owner of the drilling site and the boreholes. The generated electricity will be compensated for according to the Renewable Energy Act*.

* EEG: The German Renewable Energy Act regulates the preferred supply of electricity from renewable sources into the grid and guarantees fixed feed-in tariffs. The Act came into force in the year 2000 and was the initial spark of a huge boost of renewable energies in Germany.

About Climeon:
Climeon is a Swedish cleantech equipment vendor and world leader in converting low temperature heat into clean electricity. The company was founded in 2011 and is headquartered in Stockholm with customers in many parts of the world. Climeon was founded to deliver an economically viable business case when it comes to converting low temperature heat into electricity. Climeon was built with the ambition to deliver a good business case for utilizing waste heat with a positive environmental impact.