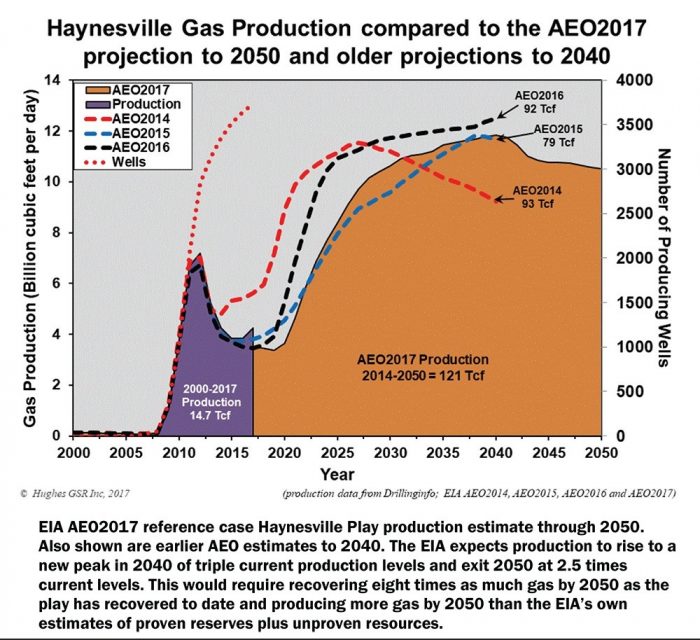 “Shale Reality Check” provides a detailed assessment of the AEO2017 shale gas and tight oil projections, based on an analysis of key fundamentals and assumptions in the plays that make up the majority of the EIA’s projected production of unconventional oil and gas resources. Hughes’ analysis—using comprehensive play-level well production data current through late 2017— finds that the AEO2017 forecasts for most plays are extremely optimistic.

“There is no doubt that the U.S. can produce substantial amounts of shale gas and tight oil over the short- and medium-term,” Hughes noted. “Unrealistic long-term forecasts, however, are a disservice to planning a viable long-term energy strategy. The very high to extremely optimistic EIA projections impart an unjustified level of comfort for long-term energy sustainability.”

Policymakers, investors, and the media rarely consider the quality of Annual Energy Outlook projections, which the EIA’s own retrospective analysis has found to be consistently over-estimated. “Before the media runs with the EIA’s 2018 forecasts for future oil and gas production, or government officials use them to set important energy policy, we encourage them to look behind the curtain of the EIA’s assumptions and ask some hard questions,” said Asher Miller, Post Carbon Institute Executive Director. “One can only assume that the EIA’s optimism is based on technological improvements made over recent years. But as the data show, these improvements have only led to a faster depletion of oil and gas reserves, not a growth in the total amount of oil and gas that can be produced. And we’re already seeing these technological advances and focus on sweet spots hitting the point of diminishing returns in a number of plays.”

EIA estimates of production through 2050 for these plays, most of which assume a revival of post-peak fields with production exiting 2050 well above current production levels, are rated as highly to extremely optimistic based on an analysis of play fundamentals.

Suggested Questions for the EIA:

Post Carbon Institute envisions a transition to a more resilient, equitable, and sustainable world. We provide individuals and communities with the resources needed to understand and respond to the interrelated ecological, economic, energy, and equity crises of the twenty-first century. Visit postcarbon.org for a full list of fellows, publications, and other educational products.

David Hughes is an earth scientist who has studied the energy resources of Canada for four decades, including 32 years with the Geological Survey of Canada as a scientist and research manager. Hughes is president of Global Sustainability Research, a consultancy dedicated to research on energy and sustainability issues. He is also a board member of Physicians, Scientists & Engineers for Healthy Energy (PSE Healthy Energy) and is a Fellow of Post Carbon Institute. Hughes contributed to Carbon Shift, an anthology edited by Thomas Homer-Dixon on the twin issues of peak energy and climate change, and his work has been featured in Nature, Canadian Business, Bloomberg, USA Today, as well as other popular press, radio, and television