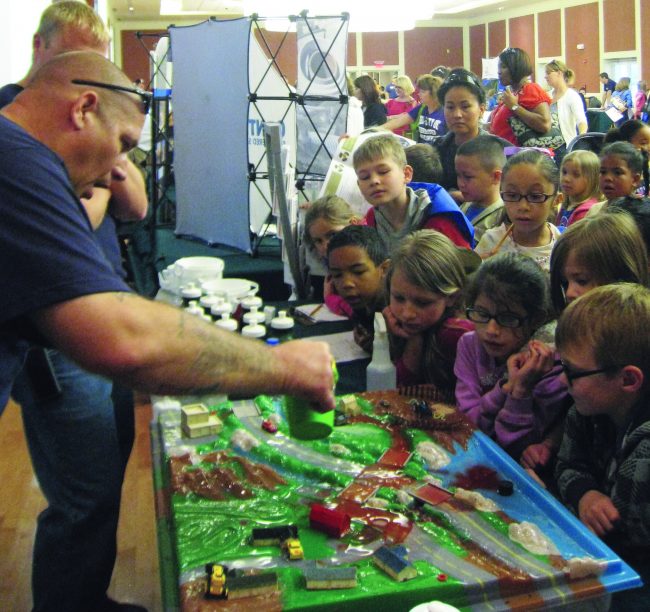 How do you motivate an entire base of U.S. Marines, civilian staff, their families and others on the base to seriously embrace environmental stewardship, sustainability and recycling—and therefore comply with long-standing executive orders—when their minds are focused largely on combat readiness? You engage their children.

Marine Corps Base Camp Lejeune in Jacksonville, N.C., already had instituted a Strategic Sustainability Performance Plan and a Qualified Recycling Program when program managers realized they needed to do more to foster meaningful participation in these initiatives among the base’s regional population of more than 137,000 people. Driving this need for participation was a series of consecutive executive orders that define a detailed list of environmental sustainability compliance directives aimed at federal agencies, including the following:

• The diversion of 50 percent of non-hazardous solid waste as well as construction and demolition debris from landfills via recycling programs.

• Ensuring that 95 percent of all new contracts require products and services that are energy-efficient, water-efficient, bio-based, environmentally preferable, non-ozone-depleting, contain recycled content, and are non-toxic.

• Increasing the use and generation of renewable energy and other targeted directives.

Addressing many of those directives, however, proved challenging without somehow effecting change on the mindsets of people across the base. Among the obstacles: limited funds; limited manpower to enlist help; a lack of incentives for the “rank and file,” especially because most residents don’t pay for their own electric, water and gas utility costs; transiency among Marines and their families as well as the commanding leadership; a host of outside contractors lacking both knowledge of and incentives to heed environmental standards; and a seeming disconnect between the base’s environmental initiatives and its daily operations focused on mission readiness.

Construction workers and other outside contractors had no way of knowing anything about the executive orders and the base’s environmental requirements. To change that, the team helped the EMD develop a list of environmental standards and acceptable “best practices” to which the contractors would have to adhere going forward.

But they didn’t end with a list of rules. The team also updated a guidebook for outside contractors to help them better understand the compliance rules and, overall, Camp Lejeune’s environmental stewardship mission, along with ways to effectively comply.

Before the outreach effort began, Camp Lejeune’s EMD developed a number of progressive recycling initiatives under its Qualified Recycling Program. For example, the team launched recycling efforts to identify and recycle solid-waste items, such as copy-machine toner cartridges, used oil rags and batteries that previously had been discarded in the landfill. The team also continued to analyze other waste that could be diverted from the landfill—including household cooking oil, plastics and cardboard—and tested a pilot program for single-stream recycling. Yet one of EMD’s largest challenges was awareness and program participation. 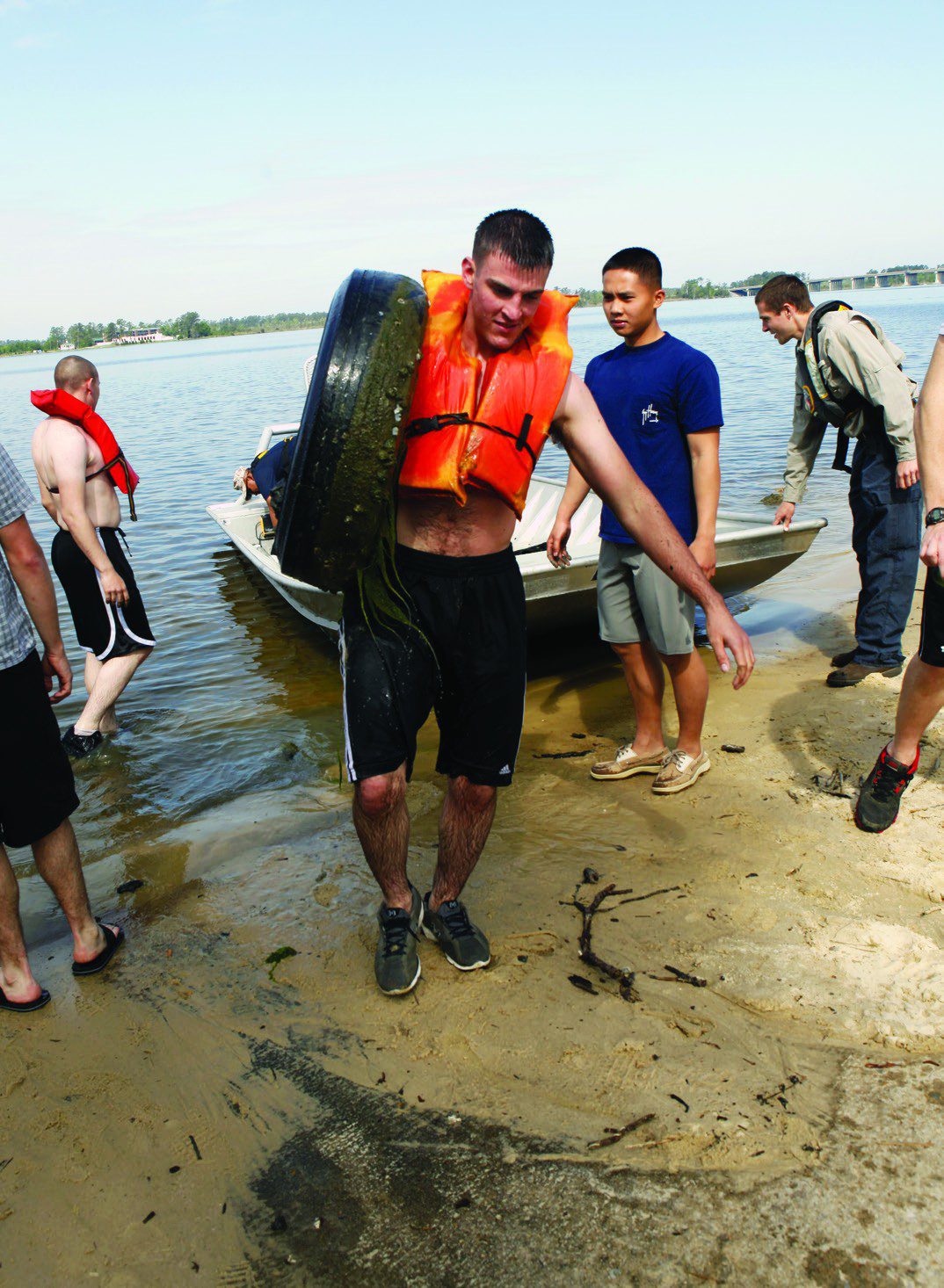 Camp Lejeune’s annual Earth Week events include a “Splash for Trash” event for Marines and their families to collect trash from French Creek.

To support the base’s Strategic Sustainability Performance Plan, recycling program and environmental initiatives, the team developed a series of flyers, brochures, pocket guides, training manuals and social-media campaigns aimed at educating Marines, families and workers on base. The materials included everything from what could be recycled and where to deliver recyclables to teaching tools to support the EMD’s recurring educational programs, particularly for the base’s transient military personnel and their families. 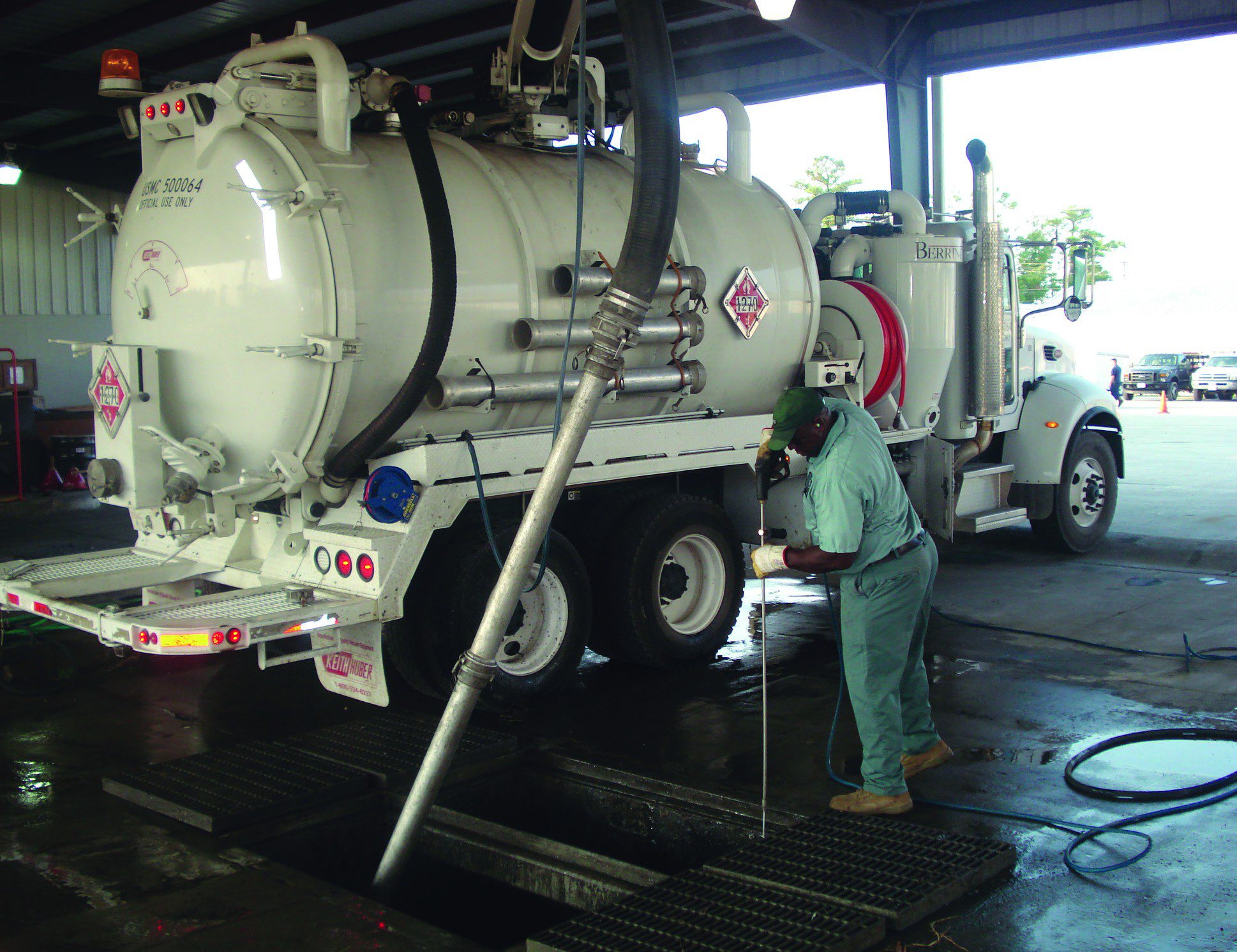 Environmental concerns are identified and resolved in the shops, ranges and hangars where Marines operate and train.

Key among the materials was an environmental-standards guidebook for Marines, “Overview of Camp Lejeune Environmental Programs,” which accompanied the guidebook for outside contractors. The guidebook was designed as a go-to reference guide about the military base’s environmental goals as well as programs that were in place to achieve those goals. It also included a Frequently Asked Questions section as well as contacts for more information. The team printed 5,000 copies of the booklet for distribution (on 100-percent recycled paper).

All of those materials ultimately contributed to an increase in participation in the various recycling programs on the base and even led to related initiatives to better manage the base’s supply and use of batteries to conserve energy and reduce waste. The battery initiatives alone saved an estimated $500,000 in long-term procurements costs.

The team also developed an executive-overview-type performance report for base leadership with simple-to-read visuals that used the colors red, yellow and green to denote the level of compliance with the executive orders. Although some leadership demonstrated greater interest than others in the environmental sustainability and recycling programs themselves, all took a keen interest in the performance reports, particularly when certain measurements would slide into the red, which signified non-compliance.

Reaching Parents Through Their Children

The most effective awareness and outreach efforts, however, revolved around engaging the children of those living and working on the military base. The idea was that if the team could engage the children and convince them to establish stronger environmental stewardship habits at home, those children would educate their families and get them to adopt a similar mindset and habits. The approach, which centered around the development of large-scale, hands-on events for children, worked better than imagined. 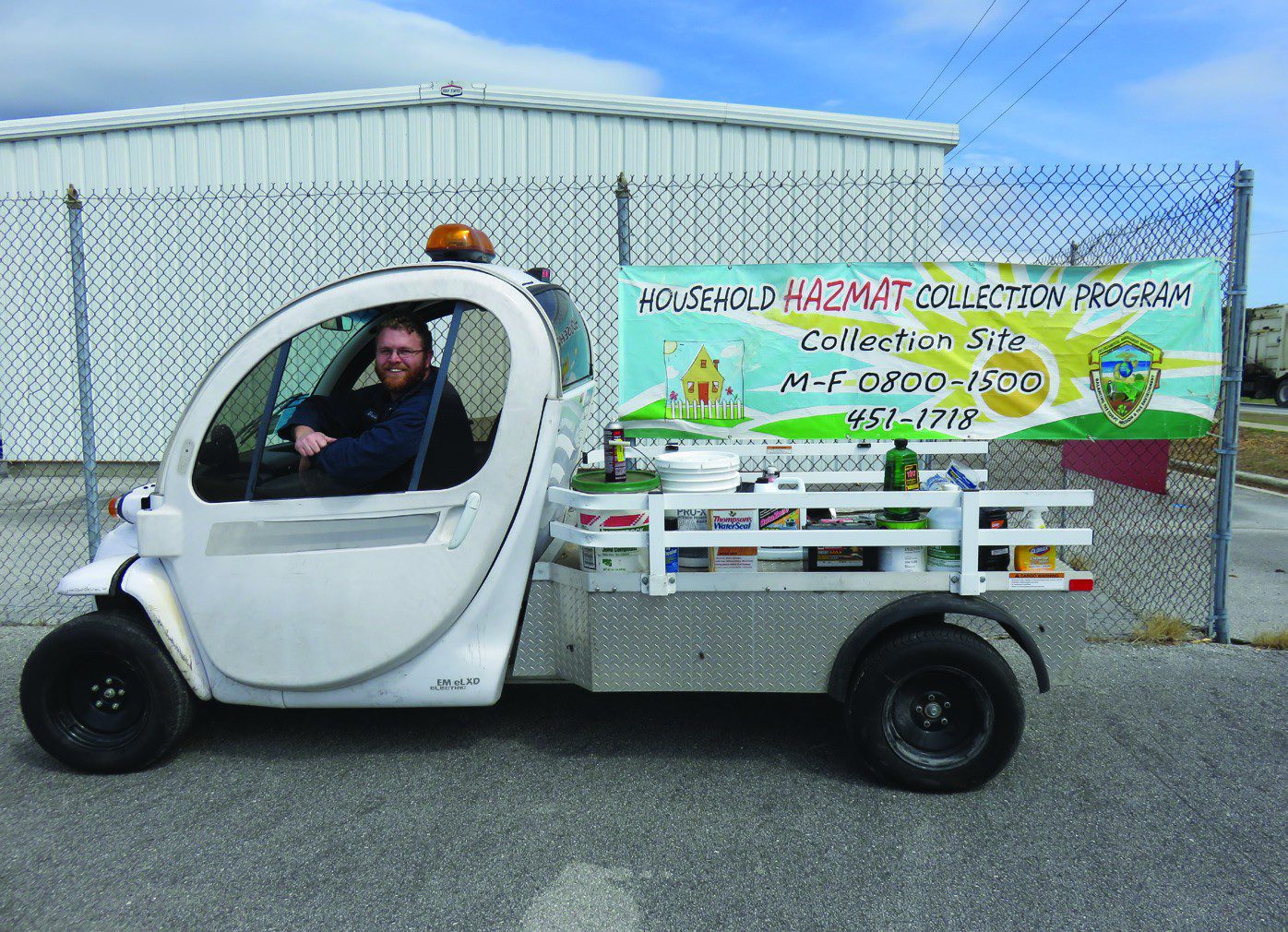 A refurbished electric vehicle promotes the hazardous material curbside pickup program, which has helped EMD collect more than 5 million pounds of material and save more than $2 million through reissue of reusable materials

The base’s signature event became an annual Earth Day Expo, which attracted more than 1,000 local children the first year alone. As part of the expo, held on base every April, the team developed more than 19 booths and stations—manned by subject-matter experts from across the base and beyond—where children could interact and learn about the environment, recycling, energy conservation and other relevant topics that support the EMD’s Camp Lejeune mission. 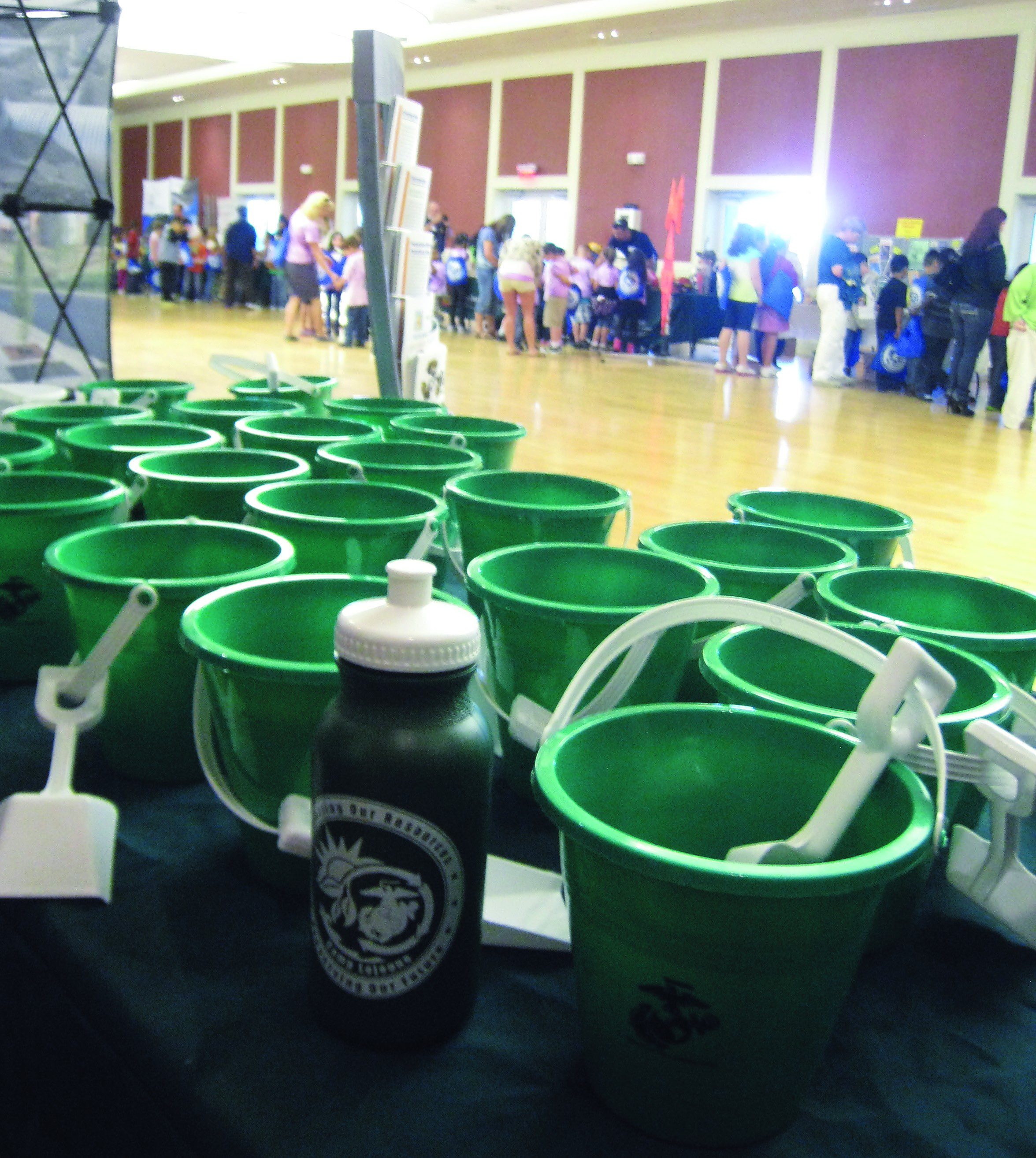 Water bottles, along with shovels and buckets, were given to children at the Camp Lejeune Earth Day Expo.

To help move children through the maze of educational activities, the team devised a scavenger hunt requiring them to ask questions along the way and seek answers to specific questions. Also included is an art contest leading up to the Earth Day event as well as prizes to garner additional participation. As a result, annual attendance continues to climb, and schools in the area now request that Camp Lejeune and its environmental team adapt the Earth Day Expo and related environmental activities to take “on the road” into neighboring schools.

Although limited resources on the base may constrain such an expansion of these initiatives, the environmental team sees the request itself as a mark of the team’s outreach and education success.

The team also developed a late-year educational initiative to coincide with Energy Action Month in October. To promote energy conservation, the team worked with area after-school programs to launch an art contest. As part of the program, the after-school centers displayed all student art contest entries, and the base published the names of the winners.

Moreover, all participants earned certificates of merit and an invitation to a recognition event, such as a luncheon or ice-cream social, where winners in each age category received prizes for their winning entries. Attendees also could hear a guest speaker discuss energy-conservation efforts across the base and how the children could contribute to such efforts.

As a result of these hands-on initiatives, the EMD saw recycling increase in family housing within a short period, and they’re hopeful that this trend will continue.

Eventually, the team succeeded in engaging the Marines themselves in the environmental activities. Among the more successful initiatives included “Splash for Trash,” in which Marines provided kayaks and other boats to military volunteers to collect trash and clean up the shorelines and beaches.

To maintain a united front on environmental sustainability and recycling, cohesive branding—including a logo for the sustainability program—tied together all of the educational materials, recycling programs, annual events and performance reports. And it worked. Ultimately, notices of violations of directives within the executive orders driving these environmental activities dropped, and compliance across the spectrum improved.