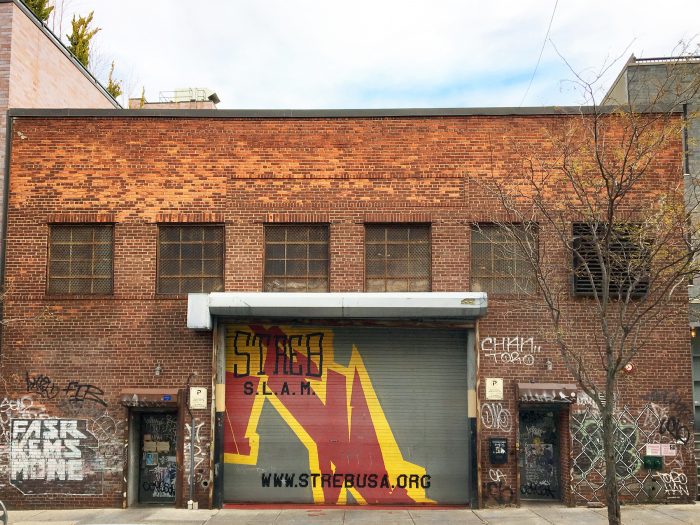 Brooklyn, NY – CTA Architects, P.C. (CTA) is serving as architect for the first phase of the multi-phased renovation of 51 North First Street. The 5,000-square foot, one-story building in the Williamsburg section of Brooklyn houses the non-profit STREB Lab for Action Mechanics (SLAM), a dance and theater performance venue and an open-access education and rehearsal space.

SLAM is the brainchild of Elizabeth Streb, a choreographer, performer, and teacher of contemporary dance, as well as an author, speaker, and MacArthur “Genius” Award-winner. SLAM is also the base of the STREB EXTREME ACTION COMPANY, which she founded in 1985. When Streb first founded SLAM in early 2003, the building, a former loading facility built in 1920 and once used by the adjacent Old Dutch Mustard Company, was vacant. After move-in, Streb kept the raw elements of the structure, such as the exposed concrete block walls and steel I-beams, as well as the street-level loading gate.

In 2007, Streb had the opportunity to purchase the building. She did so with assistance from the New York City Department of Cultural Affairs (DCLA), City Council, Mayor’s Office, and Brooklyn Borough President’s Office. More recently, the City again stepped in to provide a total of $4,886,000 in capital funding to renovate the building: over the last six years, the Mayor’s Office gave a total of $2,404,000, including support from Mayor Bill de Blasio; New York City Council allocated $1,732,000 with support from Councilman Stephen Levin; and Eric L. Adams, Brooklyn Borough President, allocated $750,000 for the project. These funds will be administered by DCLA, which, through its capital program, supports construction and renovation projects at cultural organizations throughout the five boroughs of New York City.

“We wanted to collaborate with an architect who would understand and appreciate both the historic character of our building and the need to create an inviting threshold to our performance and dance space. A place where there is a permanent open invitation embedded in the fabric of its outside skin. Craig Tooman, along with his CTA Architects team, has devised a creative approach that allowed us to proceed with the renovations within a limited budget, while preserving and building upon the history of our facility,” said SLAM founder Elizabeth Streb. “CTA even encouraged the design and construction team members to donate many of the materials – the garage door, the windows, the glass blocks, even the bricks and mortar. I want to extend my deepest thanks to Craig – we would never have been able to renovate our studio without him,” she added.

“The Department of Cultural Affairs is committed to supporting arts organizations like STREB Lab for Action Mechanics in building arts spaces that invigorate neighborhoods all around the city through creative activity and social engagement,” said NYC Cultural Affairs Commissioner Tom Finkelpearl. “This renovation of SLAM’s Brooklyn home exemplifies the type of inclusive, sustainable projects that can create a vibrant community hub in North Brooklyn, engaging thousands of students, families, artists and audience members each year.”

“North Brooklyn plays a crucial role in maintaining New York City’s position as the cultural epicenter of the world. The Brooklyn arts scene is also one of the engines of the City’s economic development by attracting millions of tourists and investors to the borough. It is vital to support our art community and I am proud to support the renovation of the STREB Lab by securing the New York City Council’s financing for the renovation,” said New York City Councilman Stephen T. Levin.

The CTA principal in charge of the project, Craig Tooman, AIA, LEED-AP, has been on the SLAM Board of Directors for the past decade. “The structure’s 24-foot-high ceilings and 50’x100′ clear-span provide an excellent space for the dance company’s rehearsals and classes. SLAM’s ability to accommodate up to 150 people at a time in the performance space has made it an integral part of the community. My family has been taking advantage of SLAM classes and performances for years. We at CTA wanted to do all we could to restore the facility, so it could continue to provide its services to the people of this city for years to come,” he said.

Beginning repair work with the New York City grants requires a great deal of coordination to ensure that work is done in accordance with stipulations put forth by the grantees, the oversight agencies, and the Building Code. The façade, however, has been in dire need of repair for some time; work needed to begin as soon as possible. The existing brick is cracking, bowing, and bulging; the steel-framed factory-type single-pane casement windows are in a state of disrepair and are far from being energy efficient.

Thus, the SLAM Board of Directors decided to break the work into two distinct phases. Phase I, just beginning, will repair the façade. This work has been made possible with financial support from the Howard Gilman Foundation, New York Community Trust – LuEsther T. Mertz Advised Fund, Booth Ferris Foundation, and a circle of generous individuals. In addition, the Phase I of the renovation would not be possible without the generous donation of goods and services by multiple companies. CTA is providing its Phase I architectural services on a pro bono basis. Services are also being provided pro bono by the expeditor, Municipal Building Consultants, Inc. Belden Brick is donating the bricks for the project at the cost of delivery only. Skyline Windows is donating the replacement casement upper floor windows. Taurino Management is donating five gallons of intumescent paint for the fireproofing of the steel lintels at the window and door openings, while SAGE Builders Corporation is donating the partial cost of the two aluminum swinging doors with full-glass lights. Total Structural Concepts, Inc. is serving as general contractor and is performing its work at cost.

Phase II, to be fully funded by the nearly $4.9 million in City grants, will include the installation of an interior mezzanine and elevator, which will provide additional space for dancers and administration, as well as offices and a conference room. This phase also includes the redesigning of the lobby, the creation of a dancer dressing room/green room, and energy-efficient upgrades, such as replacing the existing garage door with a custom aluminum and glass insulated door, the installation of wall and ceiling insulation, new ceiling fans to circulate air within the space and energy-efficient light fixtures.

Phase I is intended to restore and stabilize the front façade. It will also set the stage for the future interior work of Phase II. The project will begin with the replacement of all of the face brick. The bricks will be set in custom-colored type-N mortar to match the original mortar color. According to Alanna Jaworski, AIA, CTA’s project manager, “We will be raising the upper windows by about a foot-and-a-half to accommodate the new interior mezzanine that will be added in Phase II. The new operable aluminum casement windows will be highly energy efficient, far more than those we’re replacing.” In addition, Phase I work will include widening the two swinging side doors, and the construction of a raised parapet.

One of the biggest challenges will involve safety and logistics, as SLAM – open seven days per week – will at no time close for any of the work. “Even when we demolish the parapet and we have the wall open to the sky above the level of the window lintels, the facility will remain open,” said Chelsea Brandt, CTA’s project designer. This is due to the need to replace both the face brick and the backup, from the existing window sill level all the way up through the parapet. “Of course, we will do this in the least obtrusive way possible, working in phases, using temporary protection and sidewalk level fence enclosure, so only small parts of the façade are open at any one time,” she continued. Outside, the team will use a plywood protection, and temporary tarps. The project team will protect the interior from debris and dust through the use of temporary sheeting and by separating the areas under construction from the rest of the facility.

Another challenge is budget, as SLAM is a non-profit organization with limited funds. However, as noted above, members of the design and construction team are donating services and materials free or at cost. In addition, CTA has been able to meet the project’s objectives through value engineering solutions such as using CMU back-up in lieu of brick back-up, by raising the brick parapet to a legal height of 42” above the finished roof surface instead of installing a new steel railing inboard of the existing parapet, and by reusing the existing mechanical louvers instead of purchasing new ones

CTA’s recent projects in New York City include the restoration of the Irish Hunger Memorial; the historic landmark restorations of the 36 Gramercy Park East façade and the City Cinemas Village East Theater; exterior renovations to the Fifth Avenue Armory; design work the Coney Island Prep, Harlem Village Academy, and Growing Up Green School; and five Universal Pre-Kindergarten schools for the NYC SCA; the rehabilitations of the Grand Street Guild, Haven Plaza, and George Hardy and St. Francis apartment complexes totaling 1,175 units for the Archdiocese of New York; and the exterior renovation of the six-building Morningside Gardens co-op campus.