/ Emergency / The U.S. and the Netherlands Join Forces on Disaster Mitigation and Sustainable Planning

The U.S. and the Netherlands Join Forces on Disaster Mitigation and Sustainable Planning 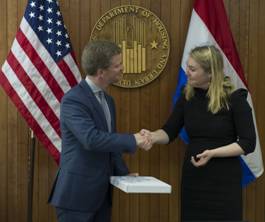 “Our two nations have much to learn from each other about finding innovative solutions to age-old shared problems,” said Donovan.  “The Dutch are no strangers to the forces of nature and I’m certain we can benefit from their experience in disaster mitigation, infrastructure management and a variety of approaches to sustainable community development and planning.”

“Although the scale of our landscapes differs, New York and the Netherlands have a lot in common,” said Minister Schultz. “Both areas are river deltas. Both areas have estuaries, rivers and water basins that are vulnerable to flooding. The Netherlands has a long history in water management, but I am not coming only to bring Dutch expertise. I am also coming to learn from the American approach.”

The HUD-Dutch Memorandum of Understanding lays out certain areas of cooperation over the next five years including: