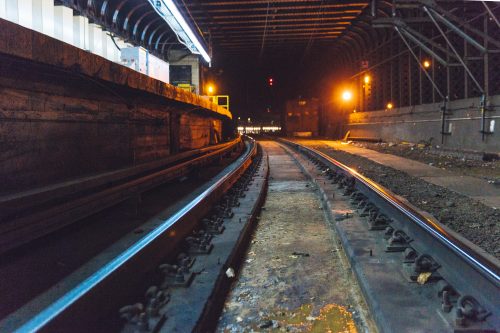 The bulk of the infrastructure renewal work for 2018 is occurring on weekends, as the project scope has not changed since November’s initial announcement. It is still expected to conclude on May 28, 2018, with minor modifications to Amtrak and commuter train weekday operations at New York Penn Station. Amtrak’s revised schedule includes:

The project is occurring in the area of Track 15, which requires a section of concrete demolition and replacement (similar to the work on Track 10 during the summer of 2017), and Track 18, which requires localized concrete demolition with complex steel hardware replacement and rail renewal. In addition, Amtrak is renewing and replacing three turnouts in “C” Interlocking, which directs Amtrak and Long Island Rail Road trains to routes heading east and to Sunnyside Yard.

During the summer of 2017, Amtrak accelerated its Infrastructure Renewal program at New York Penn Station, which is one element of Amtrak’s plan to modernize stations, infrastructure, and equipment on the Northeast Corridor.

Amtrak’s reservation systems are updated to reflect these schedules and passengers who were booked on a cancelled or altered train have been contacted and re-accommodated. Additional information can be found on Amtrak.com and Amtrak.com/NYPrenewal.

Amtrak offers a more comfortable and convenient travel experience with free Wi-Fi on most trains, plenty of leg room and no middle seat. With our state and commuter partners, we move people, the economy and the nation forward, carrying more than 30 million Amtrak customers for each of the past seven years. Amtrak operates more than 300 trains daily, connecting more than 500 destinations in 46 states, the District of Columbia and three Canadian Provinces, and reaches 400 additional destinations via connecting bus routes. Learn more at Amtrak.com.