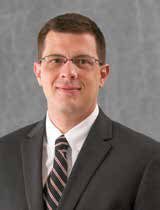 Shane Underwood is an associate professor of Civil Engineering in the North Carolina State University Civil, Construction and Environmental Engineering Department. His expertise is in the field of pavements and materials, and his current research focuses on the use of bottom-up, model-based investigations of asphalt concrete and its constituent materials as well as the use of top-down systems studies to identify needs and knowledge gaps that the bottom-up investigations can inform. His goal is to analyze pavements that are truly sustainable in the short-term and over the product lifecyle.

V1 Media: Why did this line of research appeal to you, and what are your goals in studying it?

Underwood: This line of research appealed to me because of questions of uncertainty in how we design and deliver infrastructure. My particular interest is on pavements, which started with some realizations that through time we have made certain implicit assumptions about the way things will be in the future based on how things have been in the past. I was looking at two or three different areas where this didn’t seem to be holding. We started this work about three or four years ago.

We started seeing a lot of articles and discussions around climate change, and especially extreme events, which was where we started from, and other technological innovations that were affecting infrastructure or starting to affect infrastructure and pavements, like autonomous vehicles and things of this nature. So we started this work to try and get a handle on how some of these factors could contribute to pavement engineering. We really wanted to put a number on some of the assessments of the effects of climate change as well as the potential effects of climate change on pavement infrastructure.

A lot of people have done that, but we weren’t entirely in agreement with some of their numbers and methodologies. We thought we had a different way of looking at the problem and wanted to apply that to see what the effects might be, because it’s not immediately apparent what the effects of these external stressors might be on pavements. It’s easy to overlay where climates are going to change with where infrastructure is located and see where they intersect, but when we engineer and deliver pavements and infrastructure, there are many more factors–local factors–that go into how those materials and pavements are delivered, so we wanted to get deeper into the engineering of those and see how that would affect the impacts when we overlay climate change on top of infrastructure.

V1 Media: Could you briefly describe some of your research techniques?

Underwood: First we looked at climate records from the U.S. Historical Climate Network (USHCN), and we essentially data mined some of the temperature records from that database going back to 1966 up until around 2014. We did that to extract air temperatures at different places across the United States. We then analyzed that using sets of equations that have been developed through engineering practice and other research projects that we weren’t involved with.

We borrowed the equations that relate air temperatures to actual pavement temperatures, and those pavement temperatures are the basis for selecting the type or grade of asphalt cement used in pavements. That’s what we were looking at to try and interpret the effects of temperature change: How would future temperature changes affect the grade choices that would be made based on following those equations and current practices in selecting materials? We then worked with a climatologist, Zack Guido at the University of Arizona, who works in their Institute of the Environment. He was our expert on trying to interpret some of the climate models.

From those climate models, we repeated the process of using grade selection and looked at different time windows. We looked at roughly from now going forward 30 years, the 30 years following that, and the 30 years following that, up until the end of the century. After we had an idea of how those grades would change, we tied that to how pavements would perform under scenarios where an engineer wouldn’t recognize that temperature changes were happening and choose the materials based on current business as usual. Then we used lifecycle cost assessments using standard industry assumptions on those costs and projected what the long-term effect from choosing those wrong materials might be in terms of costs. We ultimately broke that down by region in the country and then by individual states.

The experiments were held at Arizona State University on the Tempe campus.

V1 Media: Could you sum up your general results?

Underwood: The impact­­ of climate change–our estimates of cost–was regionally specific. We saw greater impact in two particular regions: the southeast and the Ohio Valley, which is roughly corresponding to the Midwest. We also found that states with large infrastructure networks, regardless of where they’re located, tend to have higher impacts, such as Texas, Illinois, Florida and others, but those were the top three.

We also saw that states with very dense infrastructure, primarily in the Northeast, were also likely to have impacts, although the total impact would not be as great as some of these larger states on a per mile or per kilometer basis. Some states, such as Delaware or Maryland, could see impacts as large as some of the larger states on a per kilometer basis.

V1 Media: How much of your research and findings relate to some of the recent climate incidents, like hurricanes or general warming trends?

Underwood: With respect to the relationship between climate and hurricanes, I am not a climatologist, so I wouldn’t make those links. But I think there is a link in how we design and deliver infrastructure in the future where things seem less certain than they once were. In this particular work, we were only looking at temperature and adopting climate records in engineering infrastructure, which is important in pavements and other pieces of infrastructure, which we didn’t specifically look at in this research. Assuming that the future will look exactly like the past can have major economic consequences.

We deliver infrastructure with multi-decade perspectives. We design roads for 20 years; other pieces of infrastructure are designed for even longer periods of time. So when engineers design the infrastructure we rely on, they may not have been considering the possibility of such large and extreme events such as the hurricanes we’ve recently seen.

V1 Media: What do you consider sustainably built infrastructure and sustainable pavement materials and why?

Underwood: To me, sustainably built infrastructure has a higher value in terms of its economic cost as well as its overall impact. As engineers, we have implicitly done that for a very long time, but we’ve been increasingly making it an explicit part of our decision-making process, looking at how infrastructure may affect people directly instead of how it effects society just in terms of economic costs.

When we talk about sustainable pavements, one of the more common things that people refer to are resource-conscious materials, like recycling asphalt pavements back into new pavements, using shingles into pavements, using rubber, modifying our materials so they’re more resource conscious. That, in my opinion, can be short-sided, because it fails to recognize the lifecycle of our infrastructure. We’re not just designing or delivering it based on what it costs today and how many resources it uses today, but how it’s going to react and behave in the future. For me, sustainable infrastructure maximizes its value and recognizes the value is not just to the engineer but to society at large.

V1 Media: If you were to make one recommendations to engineers on how to better prepare for the future, what would it be?

Underwood: The recommendation I usually give when I talk to students about the future is to recognize that infrastructure is not designed just for the sake of designing something, that it’s an integral part in our society, so we have to be cognizant of what society is doing and how it’s evolving, and what the impacts from that are. An example of that, because I deal in pavements and transportation, is the societal shift away from expecting cars to be instruments of freedom and instead looking at cars as simple utility devices–the movement toward autonomous vehicles and those types of things. As engineers, it behooves us to be aware of that and think about how what we do now can be used in the future when we don’t necessarily know what will come.