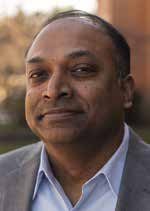 Dr. Biplab Sarkar is the CEO of Vectorworks, a Nemetschek company, with 25-plus years of experience developing CAD software. As CEO, he provides strategic leadership to the company by establishing and meeting company sales, growth and market-share objectives. Sarkar earned a Ph.D. in CAD and an M.S. in mechanical engineering at The Ohio State University. He also holds a B.Tech. in mechanical engineering from the Indian Institute of Technology, Kharagpur.

Since 1985, Vectorworks has developed software for the architecture, landscape and entertainment industries. Its first program was developed on a Mac, so the company is more “Mac heavy” than most infrastructure software developers—about 55 percent of its users are on macOS platform, and 45 percent are on Microsoft Windows.

The company has more than 650,000 users worldwide, and its software is published in 12 different languages. According to Sarkar, about 57 percent of the company’s revenue is from the Europe/Middle East/Africa region; 28 percent from Asia-Pacific, mainly Japan and Australia; and about 19 percent is from the Americas, mainly Canada and the United States.

“For us, BIM is a workflow that architects should use to create a model and then derive all the views from the model,” notes Sarkar. “It should not be related to any particular product. BIM should be considered as a workflow definition for how architects, contractors and construction-industry people should work.”

The Vectorworks modeling engine is Parasolid, an engine that many of the mechanical CAD packages use. The company also uses a constraint engine called 2DDCM. Since 2003, the company has been concentrating on creating models and designing views from these models.

“Now users can create their own model and call it the ‘single source of truth,’” adds Sarkar. “From that model, you can derive your details, elevations and sections to envision a design, visualize how that should look, and help create client presentations.”

A unique focus of the company is entertainment design and its Vectorworks Spotlight product, which helps create engineering documents for the creation of permanent or temporary stages, lighting and trusses for productions large and small. According to Sarkar, the product began in 1998 when “one of our employees started developing plug-ins for theater companies in New York.”

“When you go to a trade show, you see all these trusses hanging from the ceiling, and the lights or speakers are hanging from those trusses,” notes Sarkar. “In Europe and other parts of the world, you have to get the rigging certified by a structural engineer to make sure that the design is safe.”

Braceworks calculates the loads depending on how many lights are hanging, how many cables are going through the trusses, etc., and then performs the calculations and delivers a PDF report that can be taken to the structural engineer to get stamped for approval.

The company recently released 2018 versions of its major software solutions, and Sarkar noted his favorite new additions, some of which are longtime user requests that have been enacted in the latest release.

“One of the top features in Vectorworks 2018 is called multiple views,” he explains. “Users were always working on a single pane of a window, but now they can have multiple panes open in a single window. In one pane, you can show a floor plan; in another pane, you can show the whole model and all the layers of the design. You can have different class visibility in different panes. And you can drag one of the panes and take it to your second or third monitor.”

On the landscape side, one of his favorite additions is the direct manipulation of the contours of the digital terrain model. In prior versions, users could create, for example, a flat space on which they’re going to put a building, and they could calculate the cut and fill.

“In the new version, users can reshape the contours directly,” notes Sarkar.

Some of his favorite user projects include the 9/11 Memorial Plaza in New York, created by PWP Landscape Architecture. Another is the Monte Rosa Hut in the Swiss Alps, a ski lodge designed in Vectorworks by a Swiss architectural firm.