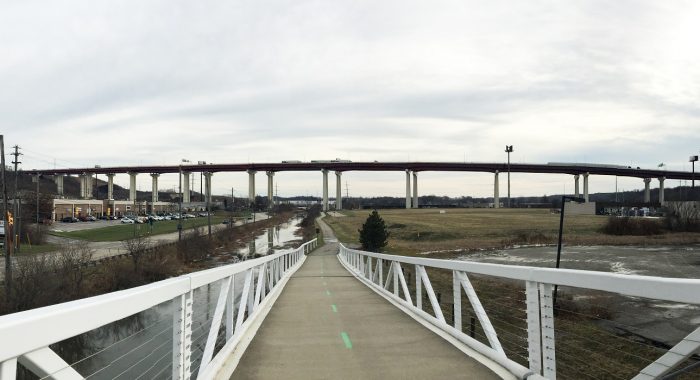 CLEVELAND – Approximately 170,000 vehicles per day cross over the I-480 Valley View Bridge, making it one of the state’s busiest structures serving local and interstate traffic in the greater Cleveland area.

The twin bridges, originally opened to traffic in 1977, cross over the Cuyahoga River Valley in Cuyahoga County. Because of the bridges’ age and heavy volume of traffic, the existing concrete decks are nearing the end of their useful life.

In October, the Ohio Department of Transportation (ODOT) announced that the Walsh Design-Build Team (DBT), consisting of Walsh Construction and CH2M, will design and construct $228 million in repairs and rehabilitation of the bridge, including a deck replacement.

Due to the bridge’s high volume of traffic and no suitable detour route in the surrounding area, the scope of the project also includes the construction of a new center structure between the two existing bridges. Designing it is one thing, but constructing it with minimal impact to traffic is another.

“The plan is to design and construct a new four lane structure between the existing Valley View bridges,” said CH2M Design Project Manager Shawn Thompson. “Since maintaining the same volume of traffic on I-480 during construction is very important at this location, the Walsh DBT has developed a plan to erect new structural steel members and construct tall pier units with virtually no impact to the existing eight lanes of traffic currently in use. This new structure will allow us to re-deck the existing bridge decks in phases and eliminate traffic backups and delays that would occur if we closed an entire half of the bridge.”

Once complete, the new structure will add two additional permanent lanes of traffic in each direction, improve access and mobility and minimize future maintenance costs for ODOT. Other improvements on the project include an approach roadway to connect the new structure to the existing highway system, drainage, traffic control and lighting.

Ranked No. 3 in Transportation Design by Engineering News-Record, CH2M is a leader in design for design-build projects and public-private-partnerships around the world. During the last 15 years, the company has worked on more than 50 similar projects, including as lead designer of the award-winning I-71/I-670 Columbus Crossroads project in central Ohio.