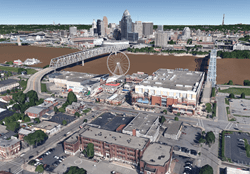 NEWPORT, Ky. – Woolpert has been contracted by St. Louis-based SkyWheel Attractions and Koch Development to provide survey, civil and structural engineering for the $13 million SkyWheel Newport at Newport on the Levee.

SkyWheel Newport will be approximately 235 feet above the Ohio River, or roughly 20 stories high, with 30 gondolas that hold six passengers each. It will be built north of the Newport Aquarium and Mitchell’s Fish Market in the Newport Festival Park area, between the Taylor Southgate Bridge and the Purple People Bridge on the river side of the levee. The entertainment venue will provide spectacular views of Newport, the Ohio River and downtown Cincinnati.

Woolpert is designing the base structure that will hold the roughly 160-ton SkyWheel, which is being manufactured by Netherlands-based Dutch Wheels.

Woolpert Engineering Project Manager Mike Timko said the base structure will be similar to a highway overpass, with an open footprint to allow for the free flow of traffic underneath in the Festival Park area.

“SkyWheel Newport will bisect the park, so the base is being designed on columns approximately 25 feet high,” Timko said. “This will alleviate the city of Newport’s concerns regarding access to or from other park attractions, and will allow vehicles as large as fire and emergency equipment and semis (semitractor-trailers) to travel beneath it. All of the festival tents and food vendors, etc., can be brought in the same as they are today.”

Woolpert—an architecture, engineering and geospatial (AEG) firm—has extensive experience in transportation engineering to lend to this design process. The firm, which is headquartered in Dayton and recently expanded its Cincinnati office, also is creating an 80-foot-long bridging structure to connect the SkyWheel to the Newport on the Levee plaza.

Plans for SkyWheel Newport have been discussed for several years, but were delayed due to flood protection concerns.

“The U.S. Army Corps of Engineers (USACE) requires that the SkyWheel project will not degrade the structural integrity of the levee, so we had to move the structural base about 80 feet north, off the levee,” Timko said. “Levees are federally protected flood control structures and are regulated by the USACE.”

The current base design is anticipated to be resubmitted for approvals to the USACE this month, and construction is expected to begin in the spring. The SkyWheel Newport should open for business in late 2018.

About Woolpert
Woolpert is a national architecture, engineering and geospatial (AEG) firm that delivers value to clients by strategically blending engineering excellence with leading-edge technology and geospatial applications. With a dynamic R&D department, Woolpert works with inventive business partners like Google and Esri; operates a fleet of planes, sensors and unmanned aircraft systems (UAS); and continually pushes industry boundaries by working with advanced water technologies, asset management, building information modeling (BIM) and sustainable design. Woolpert’s mission is to help its clients progress and become more progressive. For over 100 years and with 25 offices across the United States, Woolpert serves the needs of federal, state and local governments; private and public companies and universities; energy and transportation departments; and the United States Armed Forces. The firm currently is doing business in all 50 states and in six countries. For more information, visit woolpert.com or call 937-531-1258.