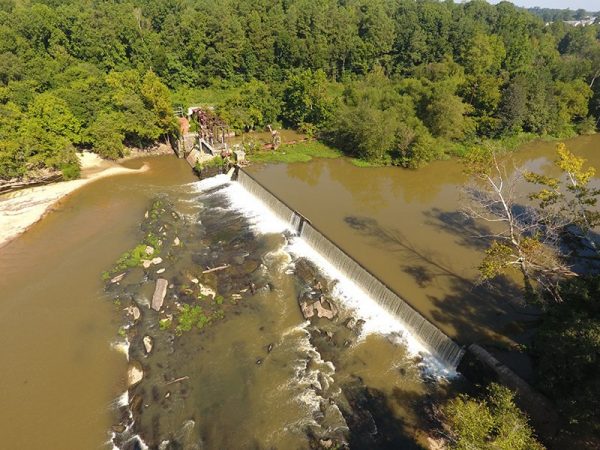 RALEIGH, N.C. – Raleigh-based Restoration Systems announces the Milburnie Dam is removed and 6.2 miles of the Neuse River in the City of Raleigh is restored to a free-flowing waterway. Over the last two weeks, the portion of the 625′ long, 15′ high structure damming the Neuse has been eliminated to reveal a fine set of new rapids not seen since before the American Revolution and the founding of Raleigh. Elimination of the barrier will allow the passage of migratory fish such as Striped Bass and Shad to spawn miles upriver for the first time in centuries.

The former Milburnie Dam in Raleigh, NC, pictured here prior to removal, was demolished last week to provide environmental mitigation off-sets for highway construction in the region. Migratory fish can pass upstream of the location unimpeded for the first time in centuries. 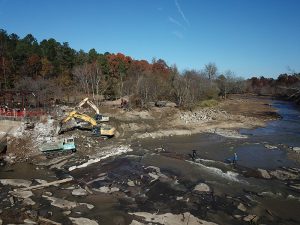 Roman Kraus and Bryan Worth of the Triangle Paddle Boarders Association prepare to run the new falls at the site of the former Milburnie Dam on the Neuse River in Raleigh, NC.

The dam removal was financed using a novel, for-profit, regulatory mechanism known as “Mitigation Banking.” Mitigation banks improve the ecology in one location in order to sell “off-set credits” to public and private developers in nearby locations so that they may achieve a no-net-loss of regulated resources. In this instance, the mitigation credits at Milburnie are largely devoted compensate for regional infrastructure projects. The creation of the mitigation bank and subsequent removal of the dam required nine years of permitting and 14 separate federal, state and local approvals. The company has doggedly pursued the project since 2001.

In 2002, nine state and federal agencies comprising the North Carolina Dam Removal Task Force determined the Milburnie Dam to be a “Top Ten” priority dam for removal in North Carolina. In 2005 and 2006, Restoration Systems removed the Carbonton Dam and Lowell Dam in Chatham and Johnstoncounties respectively, also named on the priority list.

Like many “low-head” dams across the nation, the Milburnie Dam and its associated 8.25 acres were privately owned. The late Raleigh attorney Howard Twiggs contracted with Restoration Systems in 2008 to remove the dangerous liability, and his family will share in the proceeds from the sale of mitigation credits. The dam was responsible for at least 15 drowning deaths, and had not produced electrical power in over a decade.

The restored river will be monitored for ecological improvement for seven years at 35 locations upstream and downstream in order to support the release of mitigation credits by state and federal agencies. Restoration Systems closely collaborated with American Rivers, a national river advocacy group; and Sound Rivers, a local organization formed from the Neuse River and Tar-Pamlico River Foundations, who will hold the permanent conservation easement protecting the site — hereafter known as Milburnie Falls.

About Restoration System Founded in 1998, Restoration Systems is a leading environmental restoration and compensatory mitigation company. RS was formed to improve the quality of environmental restoration and mitigation by performing projects in the most conscientious manner and implementing best practices to monitor and maintain the real estate and ecology over the long term. To date, RS has invested in and improved nearly 125,000 acres of wetlands and prairies and more than 60 miles of rivers, streams and bayous in 10 states.