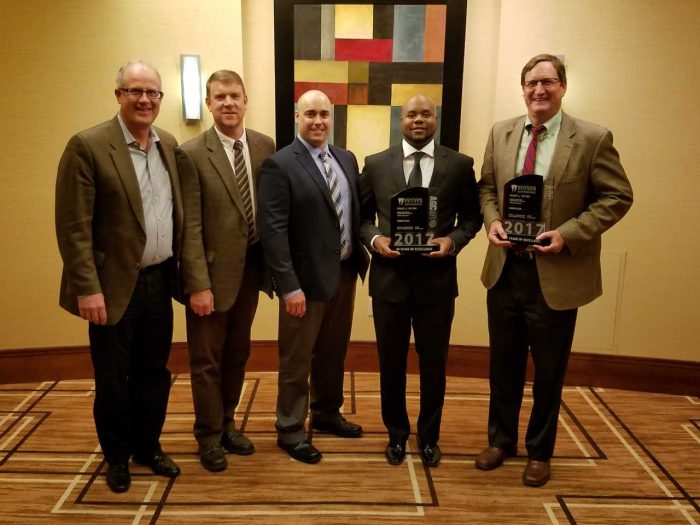 (St. Louis, MO) The Associated General Contractors of Missouri (AGCMO) honored Power UP electrical contractors on Nov. 9 with the prestigious “Project of the Year” Keystone Award for electrical and lighting installation work on the $24 million Kiener Plaza renovation in Downtown St. Louis.

Dedicated in 1962, Kiener Plaza was named after Harry J. Kiener, an amateur boxer, wrestler and swimmer who is most noted for his position on the U.S. track team at the Olympics held in St. Louis during the 1904 World’s Fair. Kiener Plaza connects the Gateway Arch on the Mississippi Riverfront and the Gateway Mall, a series of parks along Market Street in Downtown St. Louis.

“We are so blessed and proud to receive this award,” said Gerhard Glassl, Vice President of The UP Companies and Project Executive. “Kiener Plaza is such an important focal point for the City of St. Louis, so we understood the importance of getting this project right for the community. We were honored to have been a part of such a historic renovation.”

Closed since February 2016, the 3.5-acre Kiener Plaza re-opened on May 16, 2017 with a new playground, multiple fountains, native Missouri landscaping, benches, 140 trees, open gathering space and a large event lawn west of the Old Courthouse. The Kiener Plaza renovation was part of a $380 million improvement of the Gateway Arch grounds and its surrounding public spaces.

The project also included installation of 132 color-changing lights in the programmable waterfall feature on the west edge of the park and 23 lights in the fountain surrounding the iconic Olympic Runner statue. The park is powered by a 1200 amp 120/208 volt three-phase service that provides power to the three distribution pedestals.

One of the most challenging aspects of the project was maintaining cohesive coordination between all trades working on the project to properly layout and install approximately 290 light fixtures. Due to the extensive design of the sidewalks and plant beds, Power UP used computer-aided design and a Trimble Layout Robot to ensure that every light fixture was placed in their precise design location, without error. Power UP superintendents also worked daily with wireless tablets on-site to coordinate changes, set up meetings and share fixture data in real-time with Construction Manager BSI and the other trades.

Power UP, a certified Minority Business Enterprise, was also able to achieve a substantially diverse workforce on the project with 60.2% minority and 8.6% female workers on the job.

About The Up Companies

The UP Companies (UPCO) is one of the region’s largest full-service MBE-certified contractual providers. UPCO’s firms are Square UP Builders, a primary source of high-quality commercial and residential rough and finish services employing over 100 carpenters; Power UP Electrical Contractors, a leader in electrical systems design, installation and maintenance, and the largest minority-owned full-service electrical contractor in the St. Louis region with more than 50 skilled union electricians; and Keep UP Commercial Services, a multi-faceted company providing grounds and building maintenance, construction and repair, and cleaning services to commercial property owners. For more information, go to www.theupcompanies.com or call 314.865.3888.