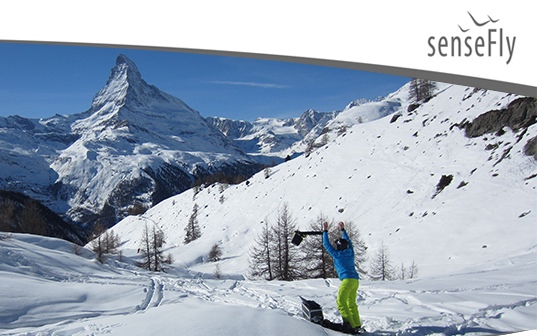 senseFly successfully demonstrated the 3D mapping capabilities of its fully autonomous mini drone under extreme conditions. Last weekend the eBee conducted a mapping mission in the mountains above Zermatt at altitudes of up to 3000 meters. Several flights were conducted to map small hamlets and valleys at temperatures below -10 degrees Celsius (14°F).

“Zermatt village, the starting point of this excursion, is a car free zone, therefore all transportation of equipment had to be done manually. On top of this the only means of transportation to reach the takeoff locations, some at altitudes as high as 2800 meters, were ski lifts and skis. Luckily the eBee only weighs 630 grams and fits with all its accessories in a carry-on case, so we could easily carry it with us and even ski down the slopes with it.“ Andrea Hildebrand, co-founder of senseFly.

The entire mapping of a small valley, including the takeoff, flight, landing and resulting geo-referenced orthomosaic and 3D elevation map, is documented in the following video:

About senseFly
senseFly is a Swiss company that develops and produces autonomous ultralight flying drones (also called UAVs) and related software solutions. The technology behind senseFly’s solution first emerged in 2001, when a team of robotic researchers at the Laboratory of Intelligence Systems at EPFL (a leading research organization in robotics and artificial intelligence, http://lis.epfl.ch) began investigating the control and navigation strategies of flying insects. This pioneering research enabled the development of a highly integrated autopilot employing smart control strategies similar to those found in flies and bees. In 2008, this autopilot was integrated into an ultralight flying wing, reproducing all the advantages of insects: efficient, elegant, lightweight, elementary and smart. In late 2009 senseFly was founded and, shortly after, senseFly launched the swinglet CAM flying drone for aerial imagery acquisition and mapping. In July 2012, senseFly and Parrot joined forces to develop their respective markets and to share technologies and industrialization techniques. Within the Parrot group senseFly is in charge of the drones for professionals.  In January 2013 senseFly launched the eBee, the first totally autonomous drone that is resistant to high winds yet remains inherently harmless and is transported in a single carry-on luggage-sized box with all its equipment.