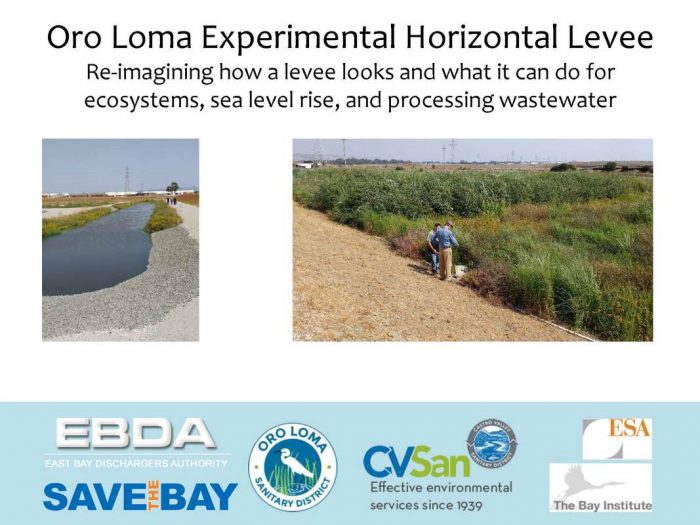 The award for Outstanding Environmental Project was presented at the 13th biennial State of the San Francisco Estuary Conference held earlier this month.

“We are pleased to be recognized for the Horizontal Levee project,” said Oro Loma General Manager Jason Warner. “This was a huge undertaking by staff, the project team, and volunteers, and we hope that our levee is a prototype for future large-scale projects that will help guard our shores against rising seas. Protecting the environment is one of our core values and this project will help advance the science of sea rise.”

Construction of the Horizontal Levee project started in 2015 and was completed in April 2017.  It is a full-scale pilot of the leading alternative to sea rise response. It is located on the southern edge of the existing water pollution control facility jointly owned by Oro Loma and Castro Valley Sanitary Districts. Instead of a vertical wall to provide a sea barrier, a horizontal levee uses vegetation on a gentle slope to absorb wave and storm surges. The native plants and wildlife that live on horizontal levees can thrive while helping to further polish cleaned wastewater from treatment plants.

About Oro Loma Sanitary District
Oro Loma Sanitary District was formed on August 7, 1911, and is one of the oldest agencies in Alameda County, California. As a special district, Oro Loma provides wastewater collection and treatment, solid waste, and recycling services. The District serves several communities in unincorporated Alameda County, including San Lorenzo, Ashland, Cherryland, Fairview, as well as portions of San Leandro and designated areas within Castro Valley and the City of Hayward. Oro Loma’s service area is located about 13 miles south of Oakland and 30 miles north of San Jose, on the eastern shore of the San Francisco Bay.