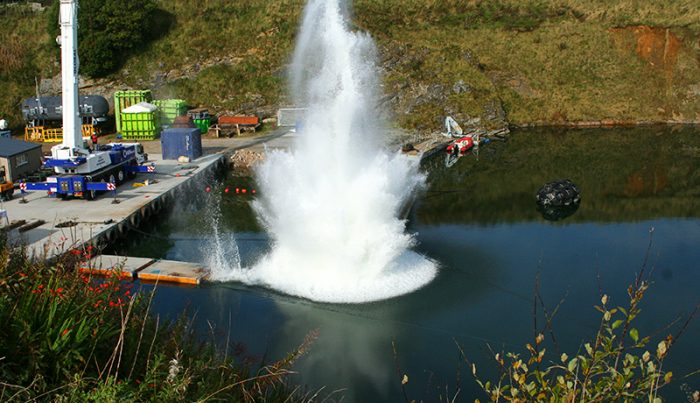 Thornton Tomasetti, the international engineering firm, today announced that the Institute of Physics, a worldwide scientific society working to advance physics for the benefit of all, has awarded the firm the prestigious Business Innovation Award for 2017. The award, presented at the Palace of Westminster in London last evening, recognizes Thornton Tomasetti Defence Ltd.’s cutting-edge airgun testing that replaces explosives testing of military vessels. Navies typically conduct powerful explosive shock tests on each new or retrofitted class of ship or submarine to be introduced into service. These survivability tests can be very costly, tie up a vessel for a significant period of time, require stringent safety management, and have considerable ramifications on the environment and marine life. The Thornton Tomasetti shock test method instead utilizes an innovative, patented application of seismic airguns that fire off high-pressure air under water, simulating explosive shockwaves without chemical by-products. The airgun testing ensures that the design of a ship will keep the crew as safe and able to function as possible, and it is a significant environmental breakthrough since testing can be done far removed from marine habitats.

“Our shock test method ushers in a new era of sustainability and safety for the testing of navy vessels,” said Thomas Z. Scarangello, Thornton Tomasetti’s chairman and CEO. “The Institute of Physics’ Business Innovation Award validates the importance of this groundbreaking technology, which we hope to see adapted by every NATO nation and allied partner.”

The UK’s Ministry of Defence is the first among NATO members to employ the technology, and David Manley, the ministry’s naval authority group deputy head of ships, was on hand at Parliament to honor Thornton Tomasetti’s work. Also present was Member of Parliament Lesley Laird. The shock test method is currently under review by several other NATO nations, and the US Congress previously indicated developmental support for the technology.

International navies regularly conduct explosives testing and training in dedicated test areas of the open ocean and other bodies of water. In this traditional testing, controlled explosives are detonated close to a vessel to verify its ability to withstand the impact of a near-miss explosive event (not a direct hit). The shock test method, alternatively, relies on the seismic airguns. When fired rapidly, these chambers of high-pressure compressed air release the pressure, which generates an acoustic pulse in the surrounding water. An array of airguns – some synchronized and some with phase delays – can be superimposed into a variety of pulse shapes that simulate the effects of explosive shock waves on a nearby structure. Testing can be conducted in a controlled environment such as a naval base or man-made lake, away from marine mammals. Fish kill is reduced to zero, and there are no chemical by-products.

“Our testing verifies that a vessel’s structure, systems and its most precious component – its crew – will remain safe and functional following an explosive event, and it does it at a reduced cost and without causing harm to the marine environment,” said Phillip Thompson, principal and European regional leader for Thornton Tomasetti Defence Ltd.

Environmental organizations have long protested against all types of navy testing including sonar tests and explosive testing, which they claim can interfere with the communication and hearing of whales and other marine life, alter their behavior, disrupt their foraging, and in the case of explosive testing, trigger large fish kills. With the shock test method, the only by-product of testing is the release of air into water, providing chemical and emissions-free testing with no environmental littering. The energy is directly focused into a ship’s structure rather than into the environment. The majority of acoustic energy is usually derived from several large guns, with smaller, lower-amplitude guns providing finer detail. Additional tuning can be achieved by altering the operating pressure of individual guns.

Airgun testing utilized in the UK reduced costs by as much as 70%. The US Navy previously estimated test and evaluation savings of $159 million over 30 years were it to implement airgun testing. Timelines are highly expedited with airguns since tests can be done at the vessel’s berth rather than transiting the vessel to an explosive range, and there’s a short turnaround time between airgun tests. Airguns are typically charged to 3000 psi, requiring only standard precautions for handling air systems under pressure, such as with a standard scuba tank with a working pressure of 3000 psi.

About Thornton Tomasetti (www.ThorntonTomasetti.com)
Thornton Tomasetti is a leader in engineering design, investigation and analysis serving clients worldwide on projects of all sizes and complexity. Through its 10 complementary practices, Thornton Tomasetti addresses the full life cycle of a structure. We have supported clients working in more than 50 countries, with projects that include the tallest buildings and longest spans to the restoration of prized historic properties. Thornton Tomasetti comprises more than 1,200 engineering, architecture, sustainability practitioners and support professionals who collaborate from offices across North America and in Asia-Pacific, Europe, Latin America and the Middle East.