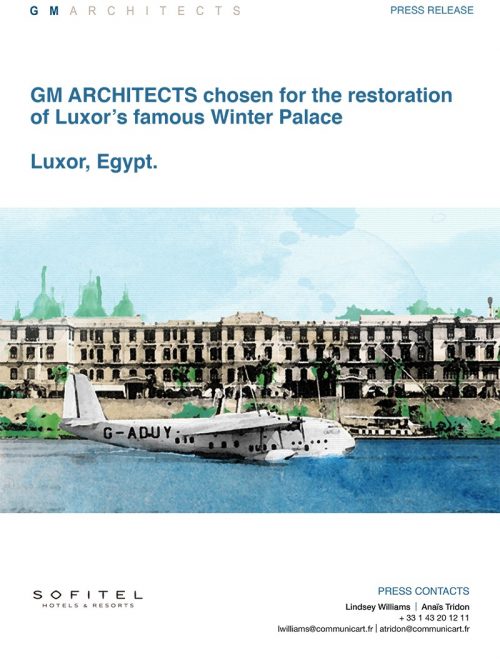 Expected to be completed by the end of 2019, The Winter Palace Hotel is located in the city of Luxor, Egypt, overlooking the river Nile and the Valley of the Kings.

Sofitel and Ekoth have chosen GM Architects to lead the project of revamping and modernizing its prestigious hotel with new creative components that reflect and embody the historical and archeolo- gical roots of its location.

The hotel stands to represent the importance of colonial history, archaeological discoveries and cultu- ral context of the location that was created in the 20th century. The Winter Palace Hotel has welcomed royalty, esteemed writers and a magnitude of journalists and explorers over the generations whom have all resided in the hotel and contributed to its current alluring and romantic ambiance.

GM Architects has been chosen for the project because of its knowledge of the region and based on its previous work with Sofitel on projects in Tamuda Bay, Morocco and Beirut, Lebanon. The aim of the project is to completely re-design the exterior landscaping, so as to link the lush hotel gardens, the most beautiful of upper Egypt with the languid and magnificient blue Nile. The new and improved hotel layout will encompass the vibrant colors of Nubia, Egypt and the French 19th century lifestyle that delights both the indoor and outdoor living spaces.

Whilst some areas keep to their historical roots and showcase elements of Egyptian history such as ancient maps and historical carpentry and textiles, new contemporary art by local artists will enrich the elegance and grandeur of the renewed Palace. Large luminous chandeliers will be hung in the renovated 1886 Restaurant and the Victoria Lounge to create an ambiance of sophistication and class, a signature of Sofitel.

Once completed, all hotel rooms are to receive new interior designs and to be re-imagined with inspi- rations from the Palace’s history and surroundings. An all new water feature is to be installed gracing the front of the hotel which will link the Nile to the other water features of the hotel, the garden fountain and the outdoor pool.

The historical axis running through the gallery of the hotel highlights the rich cultural history of Egypt and allow the guests to experience a historical journey through landmarks and periods of pharaonic regality, Arabian beauty and French glamour.

A glimpse into the history of The Winter Palace Hotel

Once a small trading post and the spiritual center of Egypt, Luxor today remains one of the largest cities in the world. Surrounded by its famous architectural monuments such as the temples Luxor and Karnak, it brings thousands of admirers from around the world every year.

Over 100 years old, this hotel was built in 1907 by British explorers, with its iconic colonial design it has been home to many famous writers, artists and celebrities throughout the decades. Visited by kings, Egyptologists and writers such as Agatha Christie who wrote her worldwide celebrated novel ‘Death on the Nile’ whilst staying at the hotel, the location has attracted many renowned visitors to the area and continues to do so today.

It is also the place that archeologists used as their base when they made discoveries of ancient Egyptian artifacts. Two famous findings were the Valley of the Kings, as well as the now 4,000-year- old tomb of Tutankhamun discovered by Howard Carter in 1922 which received worldwide acclaim, bringing an abundance of tourists and journalists to the hotel where Carter would post his findings on a bulletin board attracting many writers and explorers.

Luxor, Egypt, setting of the hotel

Surrounded by an abundance of geo- graphical inspirations such as the Luxor Temple and Karnak Temple and the Valley of the Kings, the re-design for The Winter Palace Hotel includes features and furnishings that reflect and represent some of the archeolo- gical sites that surround the hotel.

Galal Mahmound’s inspirations for the designs The Winter Palace originated from the cultural and colorful history of Luxor and the 4-mile-long river that runs through the country. With the Nile being such a vital aspect of the country’s landscape, many of Galal Mahmoud’s designs incorporate blue color schemes and the fluidity of the water.

The 4 pillars of Egypt’s history, Water, Agriculture, Trade and Spirituality

The Nile resembles a lotus flower which for Egyptians is an ancient symbol for the regeneration of life, therefore by incorporating the Nile into the new design for the Palace, Galal Mahmoud is emphasizing the spirituality that is so important to the Egyptian culture.

Having been a vital element in the lives of Egyptians, not only does the Nile provide food and trans- portation but it has made agriculture possible for cultivation and trading, the last two pillars which were the foundations of the Egyptian civilization. In addition, the soil is extremely fertile making it possible for a large variety of plants to grow on either side of the river.

Following this geographical landscape, part of GM Architect’s plan is to build new water features, one at the entrance to the hotel which will be a new large sculpture and the second to be the transformation of the outdoor pool. Both structures will be surrounded with large gardens and an abundance of flowers which will be proposed by landscape designers.

Located in such a thriving and colorful scene, Galal Mahmoud is not without inspiration for the designs and goals of the project.

The color schemes for the hotel will imitate the colors of the surrounding landscapes. Royal blues will be draped in the classical rooms to give a feel for nature and the fluidity of the river. Lush greens will brighten the superior rooms to give it a feel of verdant serenity. Exotic and glamourous ambiance to be created for the luxury rooms and the elderly & easy access rooms.

The designs for the Royal Bar are inspired by the archeological finds and Egyptologists such as Howard Carter, who discovered Tutankhamun’s tomb in 1922 and Gaston Maspero who used to come together to discuss their findings. The Royal Bar is to feature earthy tones and be lavishly furnished with ancient maps of Luxor and reflect a theme of discovery and travel. The historical inspirations bring the hotels antiquity to light reflecting their history of discovery and development throughout the generations.

The Winter Palace Hotel has welcomed kings, queens and aristocratic residents from all over the world. Galal Mahmoud plans to keep the prestigious and sophisticated feel to the hotel, encompassing royal colors throughout the 1886 Restaurant alongside endowing the rooms with sumptuous draperies, thick rugs and beaming glass chandeliers.

Where royalty such as King Farouk had their afternoon tea, the color scheme for this room will be inspired by the large pink oriental carpet that will remain in the Lounge. A mélange of exceptional, furniture, lighting and artworks will grace the room to create a vibrant atmosphere. Having lived in France for several years, Galal Mahmoud plans on using a variety of French furniture and artwork to embellish the hotel including large French doors that will allow just the right amount of sunlight into the hotel from sunrise to sunset and increase the transparency allowing the guests to appreciate the magnificent view of the Nile and the rich emerald green gardens. Integrating modern French touches to the site will also reflect the Sofitel brand experience and bring a new fresh feel to the elegant resort.

Born to Egyptian parents and having an English grandmother and Lebanese citizenship, architect Galal Mahmoud lived in France for several years, after fleeing the civil war in Lebanon with his family in 1976. He graduated from the Ecole d’Architecture de Versailles in 1986, opening his first architects’ practice in Paris the following year. In 1996 he founded GM Architects in Beirut, specializing in the luxury hotel and upscale seaside resort markets.

During his many trips to Asia, Galal Mahmoud experienced true well-being and witnessed at first-hand Asian societies’ approach to living in the shape of lifestyles that are equally comfortable in an outside environment as inside a house. Galal Mahmoud takes this approach and fuses it seamlessly with the architecture ‘for living out the good life’ that is so characteristic of the Mediterranean region.

These experiences are at the root of Galal Mahmoud’s philosophy and approach to architecture, where the concepts of ‘well-being’ and multiculturalism are key.

Galal Mahmoud’s culturally diverse background has naturally led him to adopt a multicultural approach to all his projects. His ability to apprehend the essence of a place, to be alive to the diverse influences that shape it, imbues all his projects with a unity of vision, one that is genuinely informed by its immediate context.

‘Contextual immersion’ therefore lies at the heart of GM Architects’ way of thinking. Galal Mahmoud steeps himself in the geographical, historical and cultural environment of each project. He makes these contextual components his own, reworking them in a way that is relevant to and easily comprehensible by contemporary society, but also respectful of the identity and culture of the location in question.

An internationally-renowned architecture and design firm

GM Architects architecture and design firm specialises in the field of high-end tourism, notably in the creation of luxury hotels and resorts. It is one of the largest such firms in Lebanon. The company employs 40 professionals including architects and interior designers and is managed by Galal Mahmoud in partnership with Randa Chahine, Anwar Hajj and Elie Waked.

The firm has bases in Beirut and Abu Dhabi and is active worldwide. Its completed projects may be seen in France, Africa, the Middle East and throughout the Mediterranean region.

GM Architects initially specialized in interiors for the luxury and residential markets. It has since branched out and its expertise now encompasses interior design, landscape architecture and site evaluation and analysis in seafront locations. The practice is currently working on a Sofitel in Morocco, a Sheraton Resort in Dakar and three hotels in Mykonos.

GM Architects is the only architecture and design company in the Middle East to work regularly with Accor, Rotana, Starwood, Jumeirah and Rezidor.

The ‘Museum of Civilizations’ project designed by GM Architects and presented at the 2014 Venice Biennale was selected for the ‘Future project of the year’ category at the World Architecture Festival, Singapore in 2014. In March 2015, it scooped the ‘Cultural Regeneration’ category at the 26th MIPIM Architectural Review Future Projects awards, before winning an ‘International Architecture Award’ in 2015.

The prize for “Best New Hotel” at the 2011 International Hotel Awards and for best ‘Luxury Beach Resort’ in Northern Morocco and the ‘World Luxury Hotel Awards 2016’ went to GM Architects for their work on Sofitel Tamuda Bay. In addition, at the same ceremony in 2016 Sofitel Tamuda Bay won the ‘Great prize’ of the year.