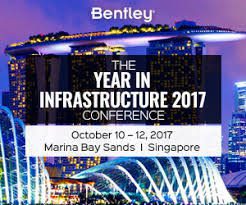 SINGAPORE – The Year in Infrastructure 2017 Conference  – In his keynote at Bentley’s annual event for sharing thought leadership relevant to infrastructure design, construction, and operations, Helmuth Ludwig, Global Head of Information Technology for Siemens, presented a scenario illustrating the companies’ shared contributions towards digital workflows and digital cities, and provided an update on the various joint development projects underway with Bentley Systems, initiated as part of their strategic alliance that was announced in November 2016. These jointly funded and resourced development projects will result in jointly offered cloud services to advance their respective users’ strategies in going digital.

“Siemens and Bentley recognize the unprecedented opportunity that ubiquitous connectivity brings for assets with digital engineering models that incorporate both their physical and functional characteristics,” said Mr. Ludwig. “Siemens’ PLM has a head start in what we call the product digital twin, production digital twin, and performance digital twin. Combined with Bentley’s BIM head start we will especially take the performance digital twin to a new level, and we can accelerate realizing the full potential of digital cities, such as here in Singapore. Our cooperative developments are advancing rapidly, which I think can be attributed to our shared commitment to openness and interoperability.”

Mr. Ludwig’s presentation illustrated the approach Siemens takes to integrating and digitalizing the entire customer value chain in general, and as a particular example, he described the advances for connected asset visibility that can be achieved with the integration of Siemens and Bentley technologies. In the workflow described by Mr. Ludwig, a process plant was captured, through digital photography, in its as-operated state with Bentley’s ContextCapture software, providing immersive visual context of the plant. That 3D “production digital twin” was then linked to the IoT-enabled components in the operating plant via MindSphere, Siemens’ cloud-based, Internet of Things operating system. Using Bentley’s AssetWise, the MindSphere inputs were configured in a browser, and in the context of the 3D model, as the user navigated the “performance digital twin” to query asset health of various components—in particular a motor vibrating to failure. The “product digital twin” of a replacement motor was accessed with Siemens PLM software, and bespoke motor mounts designed and analyzed to solve the vibration problem—and then 3D-printed. The same logic can be applied to digital cities, so that through such connected asset visibility, engineering problems can not only be detected but also solved, leveraging fully digital workflows to improve asset performance.

Other digital projects are uniquely bridging Siemens and Bentley technology to address some of today’s critical infrastructure imperatives. For example, in energy management, new distributed energy resources (DER) like wind, solar, and energy storage, require electrical grids to be bi-directional, so the GIS and network design capabilities in Bentley’s OpenUtilities are being linked with Siemens PSS SINCAL for network analysis modeling to deliver an integrated DER planning and design assessment solution.

The global push for urbanization and the increasing requirements of mobility of people and goods have accelerated the demand for rail electrification via overhead and rigid contact lines. To meet this demand, the two companies are working together to industrialize the electrification process by integrating Siemens Sicat Master, for rail catenary overhead contact line modeling and analysis, with Bentley’s newly announced OpenRail Designer.

These new joint developments build on the continued collaborative work done between Siemens and Bentley converging Bentley’s BIM and reality modeling software with Siemens’ product design and production process engineering solutions, and with the integration of Siemens’ COMOS and Bentley’s OpenPlant. Additional joint projects spanning other Siemens divisions will be announced over the coming year.

Siemens AG (Berlin and Munich) is a global technology powerhouse that has stood for engineering excellence, innovation, quality, reliability, and internationality for more than 165 years. The company is active in more than 200 countries, focusing on the areas of electrification, automation and digitalization. One of the world’s largest producers of energy-efficient, resource-saving technologies, Siemens is a leading supplier of efficient power generation and power transmission solutions and a pioneer in infrastructure solutions as well as automation, drive and software solutions for industry. The company is also a leading provider of medical imaging equipment – such as computed tomography and magnetic resonance imaging systems – and a leader in laboratory diagnostics as well as clinical IT. In fiscal 2016, which ended on September 30, 2016, Siemens generated revenue of €79.6 billion and net income of €5.6 billion. At the end of September 2016, the company had around 351,000 employees worldwide. Further information is available on the Internet at www.siemens.com.

Founded in 1984, Bentley has more than 3,000 colleagues in over 50 countries, more than $600 million in annual revenues, and since 2011 has invested more than $1 billion in research, development, and acquisitions.

Additional information about Bentley is available at www.bentley.com. For Bentley news as it happens, subscribe to an RSS feed of Bentley press releases and news alerts. Visit The Year in Infrastructure Conference website for highlights of Bentley’s premier thought-leadership event. To view a searchable collection of innovative infrastructure projects from the annual Be Inspired Awards, access Bentley’s Infrastructure Yearbooks. To access a professional networking site that enables members of the infrastructure community to connect, communicate, and learn from each other, visit Bentley Communities.

To download the Bentley Infrastructure 500 Top Owners ranking, a unique global compendium of the top public- and private-sector owners of infrastructure based on the value of their cumulative infrastructure investments, visit BI 500.

About The Year in Infrastructure 2017 Conference

Bentley’s Year in Infrastructure 2017 Conference is a global gathering of leading executives in the world of infrastructure design, construction, and operations. The conference features a series of forums, presentations, technology demonstrations, and interactive workshops exploring the intersection of technology and business drivers, and how they are shaping the future of infrastructure project delivery and asset performance. For more on the conference, visit www.bentley.com/yii2017.

The Year in Infrastructure 2018 Conference will be held in London, 16-18 October.