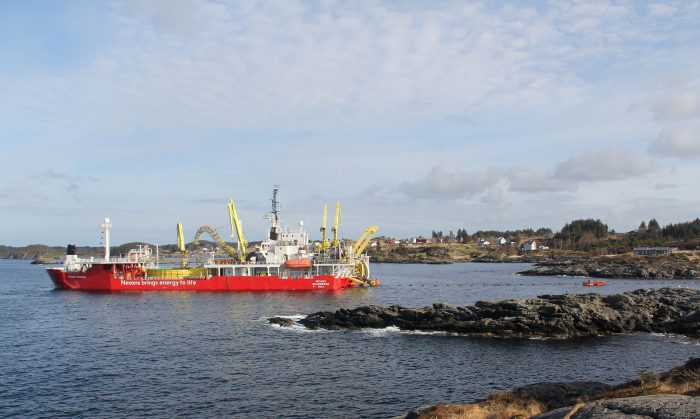 Paris La Défense, October 6, 2017 – While the Nordic countries are among the most advanced in terms of clean electricity generation, their consumption of energy per capita is also among the highest in the world due to cold climate and a sparse population distribution. To meet growing electricity demand and accompany increased energy production, BKK Nett AS, one of Norway’s largest power companies, decided to install the Kollsnes-Mongstad power line to strengthen the electrical grid in Western Norway. After the manufacturing and installation of two submarine cables for Kollsnes-Mongstad connection, BKK Nett AS has awarded Nexans with a contract worth approximately 37 million euros for delivery of the third and last submarine cable to complete the Modalen-Mongstad connection.

The new 420 kV connection between Modalen-Mongstad will ensure power supply to over 420,000 residents, businesses and industry facilities throughout the region. With the extensive archipelago landscape on the west coast of Norway, Nexans submarine cable will cross the Fensfjord, which is approximately 8 km wide and 526 meters at its deepest point, thus breaking the record of the world’s longest and deepest 420 kV XLPE submarine cable system.

The previous record was also set by Nexans during the construction of the first part of the connection between Kollsnes and Mongstad in the end of 2016. The Kollsnes-Mongstad connection had to cross two fjords: the Lurefjord and the Hjeltefjord which was a mere 390 meters at its deepest.

“Through our long history, we have always worked closely with our customers to develop most advanced technology that allows us to bring to life even the most ambitious energy projects,” said Vincent Dessale, Executive Vice President in Subsea Energy Systems Business Line in Nexans Norway.  “We are delighted that BKK has once again shown confidence in Nexans, entrusting us with the delivery of all three submarine cables needed to provide safe power supply to local residents, as well as the industry and commerce that create value in West Norway. We are now looking forward to deliver on this inspirational project, breaking our existing world record.”

Nexans will develop and produce the submarine cable at its facility in Halden, Norway. Installation and work on the seabed will be performed by Nexans’ own cable-laying vessel C/S Nexans Skagerrak in the summer of 2019.  After commissioning, the Modalen-Mongstad facility shall be handed over to Statnett ASA, the company with system responsibility for Norway’s central power grid. In 2013, Nexans became the first cable player to create a Foundation to introduce sustained initiatives for access to energy for disadvantaged communities worldwide.

Nexans is an active member of Europacable, the European Association of Wire & Cable Manufacturers, and a signatory of the Europacable Industry Charter. The Charter expresses its members’ commitment to the principles and objectives of developing ethical, sustainable and high-quality cables.

Nexans, acting for the energy transition, has an industrial presence in 40 countries, commercial activities worldwide, is employing close to 26,000 people and generating sales in 2016 of 5.8 billion euros. Nexans is listed on Euronext Paris, compartment A.