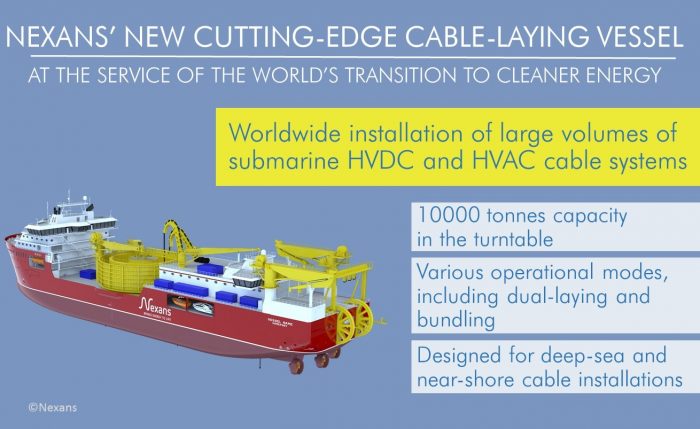 Paris La Défense, August 28, 2017 – As global energy demand continues to grow, the need for clean energy is becoming ever more urgent. In the face of growing concerns around climate change, energy transition is now a top priority on the international agenda. Today, not only are nations developing their own renewable energy strategies, but they are also cooperating with other countries with the aim of optimizing their use of resources by building common infrastructure, both on land and offshore. To drive this fundamental shift in the global energy production and distribution with the ever-increasing importance of clean energy, Nexans is proud to announce that it has started the construction of a new cable-laying vessel for submarine HV cable systems installation.

“The construction of this new cable-laying vessel is a fundamental milestone in our commitment to cleaner energy,“ said Arnaud Poupart-Lafarge, Nexans CEO. “For many decades, Nexans has been acting for energy transition and sustainable development. In this next exciting chapter of our capacity to meet customer expectations, the cutting-edge technology of the new ship will enable Nexans to support countries in their development of the unlimited potential of renewable power generation”.

State of the art vessel for submarine cable installation

Built by ULJANIK Group, a Croatia-based shipyard with over 160 years of expertise in construction of all types of vessels, the high capacity Nexans vessel is designed for worldwide installation of large volumes of HVDC and HVAC cable systems, even in the most severe weather conditions. The vessel covers the complete Nexans submarine product range, and has a 10 000-ton capacity turntable.

The new ship, designed by consulting agency Skipsteknisk AS, encompasses almost 100 years of Nexans’ experience in submarine cable installation and brings it to the next level with high degree of redundancy in power and propulsion, including the highest standard of Dynamic Positioning (IMO class 3) capabilities. The laying equipment allows the vessel to perform complex installation operations of flexible products in shallow to deep water. One of the vessel’s numerous exceptional qualities is the ability to provide various operational modes, including large bundling capacity, targeting the latest and future developments in HVDC cable technology.

“Together with our legendary vessel CLV Nexans Skagerrak, the new ship will reinforce Nexans’ position as a leading player in the growing submarine HV cabling market”, commented Dirk Steinbrink, Senior Executive Vice President High Voltage and Underwater Cable Business Group at Nexans. “With the advanced technology, impressive capacity and the many cable-laying capabilities, this vessel will be one of Nexans’ key strategic assets”.

Aligned with Nexans’ CSR policies and its commitment to sustainable development, the vessel is specifically designed to have a reduced environmental impact. The ship also benefits from the latest requirements for crew safety and vessel security in compliance with the strictest international safety standards.

The cable-laying vessel is expected to be delivered and start operations by Q3 2020.

In 2013, Nexans became the first cable player to create a Foundation to introduce sustained initiatives for access to energy for disadvantaged communities worldwide.

Nexans is an active member of Europacable, the European Association of Wire & Cable Manufacturers, and a signatory of the Europacable Industry Charter. The Charter expresses its members’ commitment to the principles and objectives of developing ethical, sustainable and high-quality cables.

Nexans, acting for the energy transition, has an industrial presence in 40 countries, commercial activities worldwide, is employing close to 26,000 people and generating sales in 2016 of 5.8 billion euros. Nexans is listed on Euronext Paris, compartment A.