I-77 Toll Lanes Decision Still Months Away in North Carolina 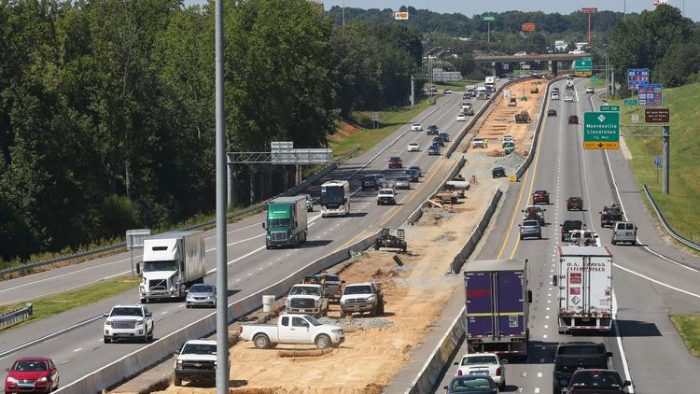 A consultant hired to analyze a Charlotte toll lanes project reviewed its findings Wednesday before a regional transportation board, but it will be months before the state decides whether to make any changes. The discussion marks the latest incremental step in a state-backed review aimed at restoring confidence— and what will be needed to find consensus — in an expansion of Interstate 77 between Mecklenburg and Iredell counties.

A preliminary version of the report released this month was presented to the Charlotte Regional Transportation Planning Organization, a governing body that works with the state and Washington to set priorities and establish policy. The state hired consultant Mercator Advisors last spring to study the existing contract between state government and I-77 Mobility Partners. I-77 Mobility is an offshoot of Spanish infrastructure firm Cintra. In 2014, the state transportation department hired I-77 Mobility to build a $650 million, 26-mile toll lanes expansion from uptown to Mooresville. The state is paying $90 million toward the project.

Construction started in November 2015 and the lanes are scheduled to open late next year. Even before crews began building the new lanes, a loud and sustained chorus of critics raised a number of objections, including concerns over excessive toll rates, a lack of significant traffic congestion relief and a 50-year term likely to prevent expansion of free lanes without significant penalty fees.

Republican Gov. Pat McCrory and his transportation department cited previous endorsements by regional planners and local government as the basis for keeping the toll lanes project intact. McCrory, who lost to Democrat Roy Cooper last fall, also pointed to the expense of canceling the contract with the private firm and warned of other state-backed roads projects being delayed if the state was forced to buy out I-77 Mobility Partners.

Cooper’s administration called for a review soon after taking office. Whether any changes will be made has yet to be determined. The state is paying for Mercator’s study, estimated to cost $100,000. Mercator, based in Philadelphia, is seeking public response to its initial report and plans to compile a revised version late next month.

James Taylor, Mercator principal, presented several options the state could consider, including taking over the toll lanes project and using taxpayer money to finish it; ending the contract and allowing the regional transportation group to determine whether toll lanes should be used or supplemented and how to pay for any such changes; negotiating changes to the current contract with I-77 Mobility by reducing tolling or changing or deferring some of the existing terms; working on other improvements in the I-77 corridor beyond the toll lanes to ease congestion; or devising a way for the state to buy the toll lanes expansion back from I-77 Mobility upon completion.

For many of the possible changes, Mercator’s Taylor said additional analysis will be needed from traffic and environmental consultants. Mercator’s expertise is in the financial aspects of infrastructure projects such as tollways, highways and similar large-scale investments.

“All the options are viable as construction continues,” Taylor said Wednesday after the presentation. “You may end up paying more to terminate it, but there will be less cost to complete it as it goes forward. I don’t think that should be a driver in how quickly they make the decision. It really should be based upon the public input and the date they get.”

At minimum, it would cost the state $300 million to get out of its contract with I-77 Mobility, according to estimates by Mercator. An independent appraiser would be needed to ascertain the value of the interstate expansion, Taylor said. (He isn’t related to Matthews Mayor Jim Taylor, who leads the regional transportation planning organization.)

In its initial report released this month, Mercator pointed out several flaws in the so-called public-private toll lanes project to date, including “inconsistent public engagement (that) undermined confidence,” lack of information and education provided to residents “to evaluate the relative merits of express lanes and alternatives without tolls” and uncertainty and skepticism among many in the public stemming from a lack of credible and available information on the I-77 expansion.

I-77 Mobility is financing the 26-mile toll lane expansion, encompassing two lanes north and south along I-77 between exit 11 north of uptown to exit 28 in Cornelius. One of the two additional lanes on each side will result from converting existing high-occupancy lanes. The existing general use lanes will remain free to all drivers. One toll lane on each side will run from exit 28 to exit 36 in Cornelius.

McCrory and some local politicians in north Mecklenburg lost support — and, in several cases, elections — in whole or in part because of backlash in the Republican-leaning area over the toll lanes.

Next week, Widen I-77, a vocal grassroots group opposed to the toll lanes, will make a presentation and conduct a question-and-answer discussion with residents as part of a forum in Mooresville. Kurt Naas, leader of the group, attended the Mercator briefing on Wednesday, but didn’t address the regional transportation board.

Several toll lane opponents, but no supporters, participated in a public comments portion of the meeting. They included Mike Militch, a Cornelius town commissioner who called the toll lanes “deeply flawed” and dismissed the I-77 project as an expensive way of failing to solve worsening traffic problems. Seventeen-year-old Julia Carr, who devoted a school paper to the toll lanes and who spoke to City Council last year during a citizen’ forum on the subject, said Wednesday the contract between the state and the private developer is “riddled with political corruption.”

Legal challenges and other maneuvers by opponents haven’t slowed the construction of the toll lanes, but the undiminished frustration over the terms of the interstate expansion convinced Gov. Cooper to call for a review of the existing agreement. What, if anything, will change, and when, is yet to be determined.